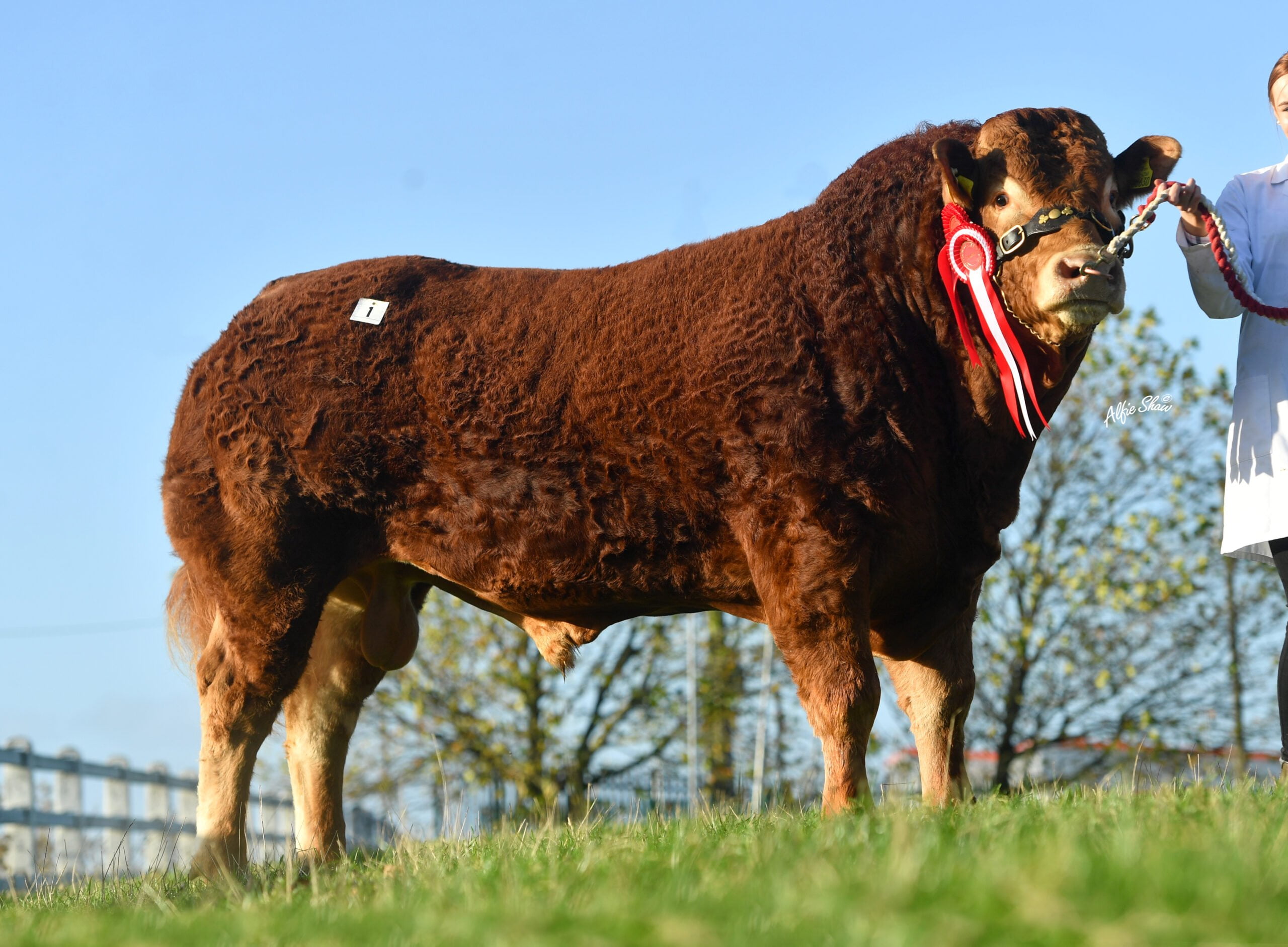 All roads led to Roscrea Mart on Saturday, November 5th, for the Irish Limousin Cattle Society’s autumn premier show and sale. The show – which kicked off at 9:30am – consisted of a Junior and Senior Male Championship, and a Female Championship.

The task of judging the show was left in the very capable hands of Chris Neale of Nealford Limousins in the UK, while George Candler got the sale underway promptly after the show which included some 65 bulls and 22 heifers. Continuing on the success of the society’s 2022 spring sales campaigns, there was a noticeable interest the strong, quality beef bulls that were presented for sale on the day, leading to an average price of €4,135 for the males.

Additionally, there was demand too for the females, which led to an average price paid of €3,490 and an overall clearance rate of 70% – including the bulls and heifers.

It was standing room only for larger parts of both the show and the sale at the Tipperary-based venue. In terms buyer locations, a large geographical spread achieved with bulls being exported to Northern Ireland and many more finding homes in the west, midlands and south of the country.

Starting with the prize winners, it was Gareth McGuinness’ Creenagh Rocko, a November-2020 born bull that took home the Senior Male Championship top spot. This bull, which was bred by Joe Logan, is sired by Mereside Godolphin out of the dam, Creenagh Jill. He carries 4-stars on the Replacement Index and 5-stars on the Terminal Index.

Rocko, who was crowned National Senior Male Champion in Tullamore this year, later went on to be purchased for €9,000 – the joint top price on the day – with his new owners based in Co. Antrim. The Reserve Senior Champion was awarded to lot number 7, Killcastle Saturno ET – a February-2021 born, Ronick Hawk son. Saturno was bred by Westmeath-based breeders, A & P Kelly. Out of the dam Killcastle Marilyn Monique ET, he carries 4-stars on both the Replacement and Terminal Index.

A first prize winning senior bull at the recent 50th Anniversary Extravaganza in Carrick-on-Shannon, Saturno headed for his new home in Co. Kerry; the well-conformed bull also went under the hammer for €9,000. Turning to the Junior Male Championship, Darragh O’Meara secured the champion award with his bull Hurricane Scat Man ET. The September-2021 born bull is sired by Ampertaine Foreman and carries 4-stars on the Replacement Index and 5-stars on the Terminal Index.

Bred from Hurricane Lady Hawk ET – an Ampertaine Elgin daughter – he won numerous Champion and Interbreed Champion awards on the the circuit this summer, while also taking home the Reserve Senior Champion in Tullamore last August.

George Candler’s hammer fell at €6,400 in the sale ring later in the day. Co. Meath-based breeder, Eddie Daly, secured the Reserve Junior Champion with his bull, Clonmahon Spartacus ET. Born in July 2021 with plenty of shape and power, he carries 4-stars on the Replacement Index and 5-stars on the Terminal Index.

Sired by Ampertaine Foreman out of the dam – Bremore Goldielocks, he sold for €4,000 and will now call Co. Clare home. Moving to the Female Classes, the champion was awarded to Thomas O’Shea for his heifer, Templequain Sheeba. A September-2021 born, Ampertaine Foreman daughter, she carries 4-stars on the Replacement Index.

Bred from the dam Templequain Penny, Sheeba later sold for €6,900. The Reserve Champion was awarded to another Ampertaine Foreman daughter – lot number 78, Clonguish Rosalie. Bred by Joeseph McGarry, Rosalie was born in November 2020 and also carries 4-stars on the Replacement Index.

Her dam, Castleview Jewel, is a Wilodge Tonka-bred cow; she was sold for €5,800 during the sale. As mentioned above, there was a huge demand for quality beef bulls and this was evident in the prices achieved on the day. The second highest price was achieved by David Cogan and his bull, Clooncara Limousins Showman.

Showman, a Ampertaine Majestic son, was awarded first in his class earlier in the day and went on to sell for €7,100. Out of the dam Thomastown Harriet – a Wilodge Tonka daughter – he carries 5-stars on the Replacement Index and 5-stars on the Terminal Index. Next up was Kevin Graham and his bull, Liverpool Sonny. A son of Ampertaine Magnum out of the dam Liverpool Mango, Sonny sold for €6,000. This stylish bull carries 5-stars on both the Replacement and Terminal Indexes and has a calving difficulty figure of 1.8% on beef cows. Liverpool Sonny went under the hammer for €6,000

Sparkler – who a second prize winner on Saturday – is a Ampertaine Nugent son out of the dam, Ammaghmore Hazel – an Ampertain Commander daughter. He carries 4-stars on the Replacement Index and 5-stars on the Terminal Index. Next up to hit the high notes was Teleri Thomas and her April-2021 born bull, Ewdenvale Ivor son – Keltic Snoopy. With 5-stars across the board, Snoopy went under the hammer for €5,900.

Jimmy McHugh from Dundalk, Co. Louth, secured €5,500 for his July-2021 born bull, Killmactransa Sidney – a third prize winner on the day. He is fully french bred – sired by Objat out of the dam, Mirka.

Lot 49, Cloghbane Sauron, was sold for €5,000. This bull, bred by Eamon Boland, was born in May 2021 and carries 5-stars on the Replacement Index and 5-stars on the Terminal Index. He is sired by Ampertaine Nugent and out of the dam Cloghbane Nova – a Tomschoice Ironstone daughter.

Co. Offaly man, Tom Harney achieved €5,000 for his bull, Finboy Sultan ET. This bull is sired by Tomschoice Lexicon out of a Wilodge Cerberus-sired dam – Finboy Icepop. He was born in July 2021 and has 5-stars across the board.

In addition, €4,500 was hit on two occasions. First by Alan Borton and his bull, Brookfield Socks. Socks was born in September 2021 and is a son of Ampertaine Nugent and the dam, Liscarn Harmony. Second to make €4,500 was lot 75 – Donnelly Santa Cruz. Owned by Anthony Donnelly, Santa Cruz was born in September 2021 and carries 4-stars on the Replacement Index and 5-stars on the Terminal Index. He is sired by Mereside Godolphin out of a Wilodge Vantastic-sired dam – Donnelly Jasmin ET.

Co. Offaly man, John Kenny secured €4,400 for his bull, Carrefour Samson – an April-2021 born son of Derrygullinane Kingbull. Samson has 5-stars on both the Replacement and Terminal Index. Looking at some of the heifer prices achieved on the day, Michael Molloy secured €4,100 and €3,800 for his heifers Mullary Sky and Mullary Snowdrop. Sky is a daughter of Kaprico Eravelle, while Snowdrop is sired by Tomschoice Lexicon. Speaking after the sale, Pat Mulvehill, CEO of the Irish Limousin Cattle Society, said: “This was another very positive sale for Irish Limousin. We seen a strong demand from Irish farmers for quality Limousin genetics.

“Commercial Limousin cattle prices have been performing extremely well this autumn in mart sale rings, thus driving the demand we witnessed at this sale.

“Similarly to the society’s spring sales campaign, the strong average prices and clearance rates testify the confidence in the marketplace for quality Limousin beef genetics,” he said.

The society would like congratulate all breeders and thank all under bidders and wish all successful purchasers the very best of luck with their new bulls and heifers.  The society would also like to thank Roscrea Mart and the Limousin council stewards for their help in making the autumn premier a success.

The next society sale will take place in Athenry Mart on Saturday, December 10th.