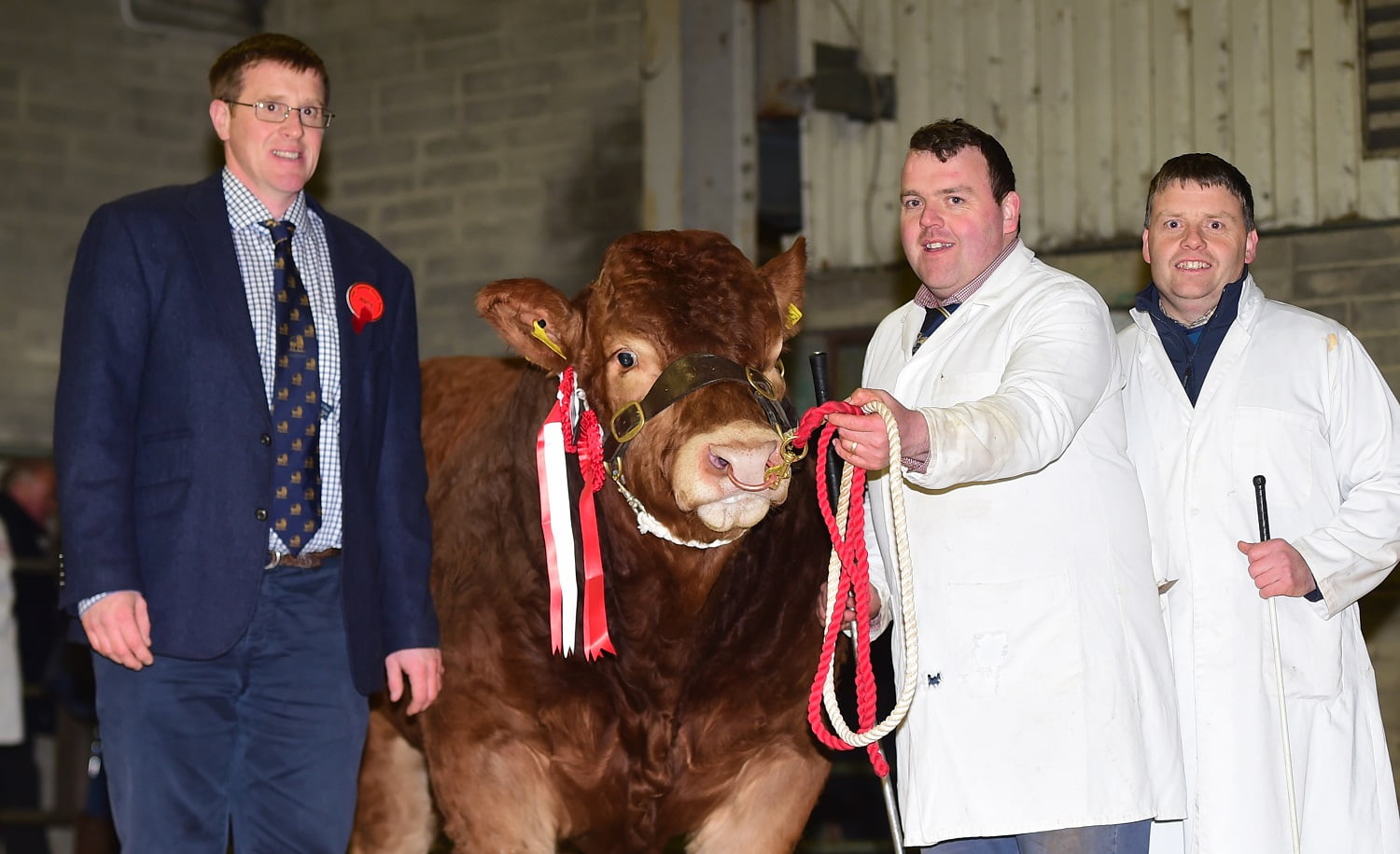 The Halloween Bank holiday weekend heralds the Premier sale of males and females at Roscrea Mart and so this year the show and sale took place on October 28th and 29th, with the bulls shown on Sunday evening and the females on Monday morning. The sale itself met with an average selling price for bulls of €3986 with females averaging €2772. George Candler took the podium for the bulls with Denis Barrett taking charge of the female sale.

Judge for the pre-sale show was Mr. Bruce Goldie, of the Goldies herd which is based in Mouswald, Dumfries and Galloway. Bruce is a highly regarded breeder and judge. Bruce has judged at many prestigious events including the 2016 National Show in Carlisle. His farm enterprise consists of 70 breeding pedigree females along with some commercial heifers which are used in the Goldie’s flushing programme. Some noted AI bulls have originated in the Goldies herd such as Goldies Terance and Goldies Jackpot. Bruce and his family also breed pedigree Texel ewes.

The Irish Limousin Society would like to wish all purchasers the very best with their new livestock. Thanks to our judge Bruce, auctioneers George and Denis and our stewards Frank, Donal and Jimmy.  Our next show and sale will be in Tullow mart, Co. Carlow on Wednesday 14th November. 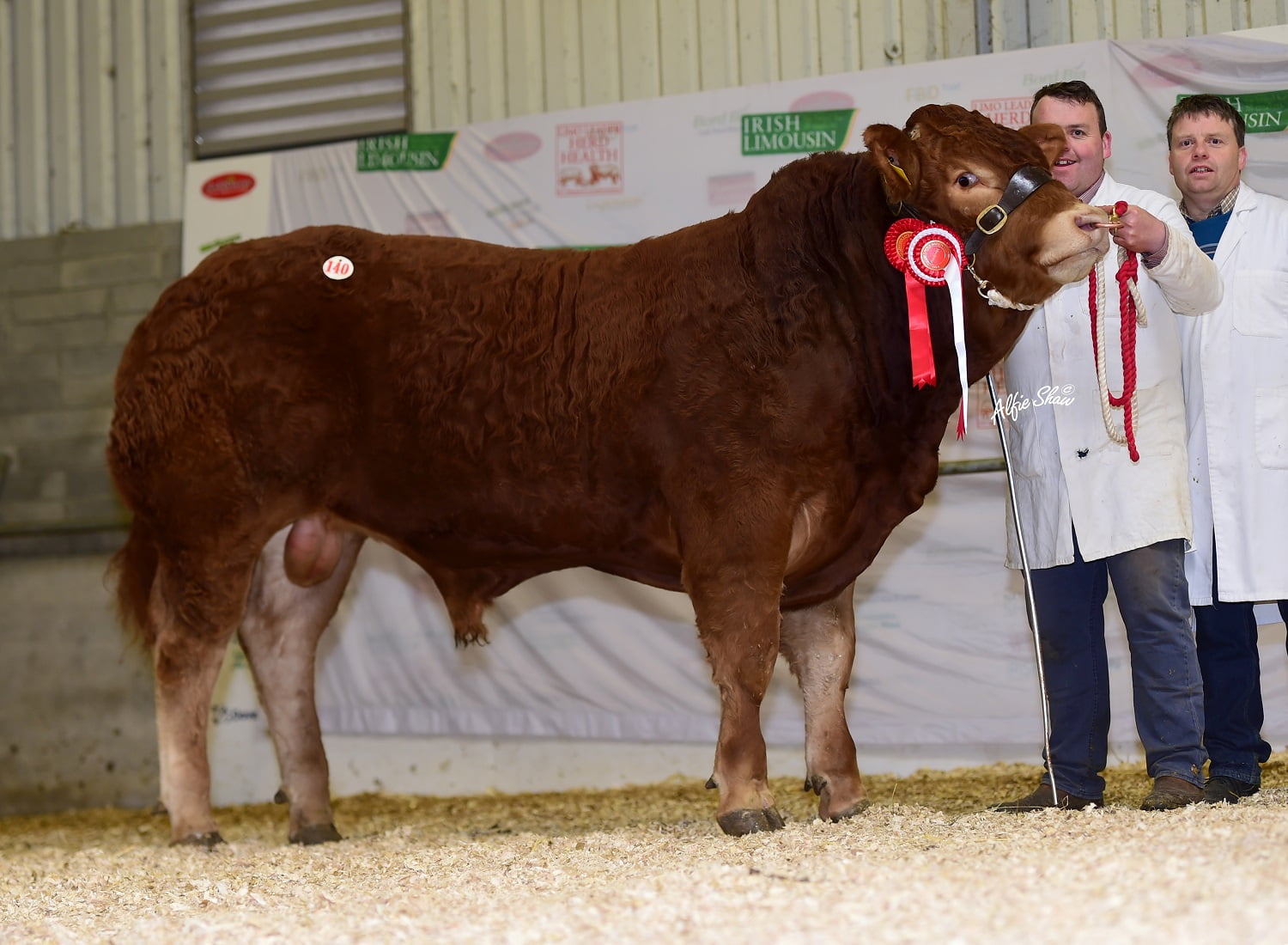 Topping the October premier sale at €38,000 was the outstanding Junior Champion Carrickmore Maximus Et. At just 13 months old Maximus has amassed outstanding success, he was Overall Limousin Champion at the 29th National Show held in Tullamore in August – a remarkable achievement given he was only 10 months old at the time. Maximus has a very impressive pedigree, his sire Ampertaine Foreman (S1421) sold in Carlisle for 38,000gns in 2012, (Foreman was bred by James McKay, of the renowned Ampertaine herd based in Maghera, Derry). Maximus’s dam Baileys Ice Princess (bred by Tom Bailey) enjoyed a tremendous showing career – winning the National Overall Limousin Champion title in both 2015 and 2016 (as part of the International Limousin Congress), she was also Balmoral Champion in 2015. Maximus was bred by John and Karol Connell, Oldcastle, Co. Meath. He was acquired by a syndicate comprising of the Goldies, Harestone and Tweeddale herds of Messrs. Goldie, Barclay and Watson.

Eddie Lynch, Loughduff, Co. Cavan had a very successful Premier weekend in both the Show and Sales ring, taking the plaudits of Reserve Junior Champion was Ernevalley Mitch ET, an embryo son of Sarkley Gertude (a Malibu daughter) and the aforementioned Ampertaine Foreman. Born in June 2017, Mitch came to the ring with five star ratings in Replacement index, Terminal index, Carcass weight and Carcass conformation. Mitch was the first of two bulls from Eddie’s yard to command a price of €9200. Mitch was purchased by returning customer Jonathan Watson of the Tweeddale herd, Berwick upon Tweed, Northumberland, UK.

Eddie’s second bull to command €9,200 was Ernevalley Madison ET, also a son of Ampertaine Foreman. Madison’s dam Haltcliffe Franc is a daughter of Cloughhead Umpire. At 15 months old, Madison has five star ratings in Terminal Index, Carcass weight and Carcass conformation. Second prize winner Madison was purchased by Dovea Genetics as an addition to their wide selection of Limousin sires. 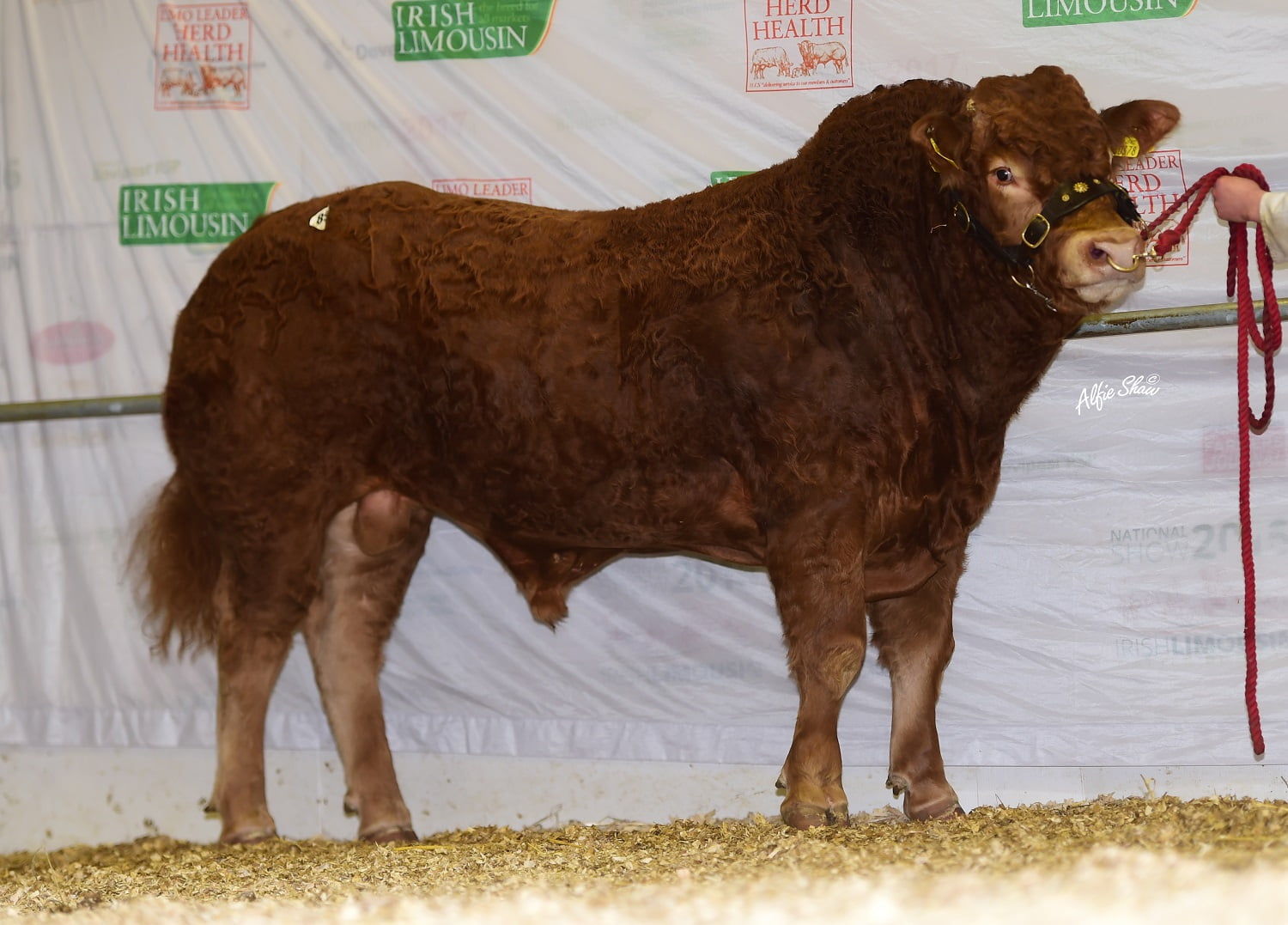 Senior Champion Ammaghmore Monty sold for €5600. Monty is an April 2017 born son of Gerrygullinane Glen (LM4044) and the Ampertaine Commander daughter Ammaghmore Hazel. He came to the ring with an array of five star ratings. Monty was bred by Sean Garrett, Ballycastle, Co. Mayo. He was acquired by Paric Fallon, Curraghroe, Co. Roscommon.

George McCague purchased Ernevalley Major Et, a second prize winner, for his Bridgeview herd based in Newry. Major has Lodge Hamlet (LM4058), Ampertaine Foreman and Scott in his pedigree. With five star ratings in most traits, 14 month old Major commanded a selling price of €5600.

Third prize winner Mullary Maxime sold for €5500. Maxime is a son of Mullary Intrepid (LM4093) and Ashleigh Dawn (Et). He was Reserve Senior Champion at the National show in Tullamore, he was also Interbreed Champion at Dundalk and a first prize winner at both Trim and Oldcastle shows. Maxime was bred by Michael Molloy of Dunleer, Co. Louth, he was purchased by Stephen Illingworth of the highly regarded Glenrock herd which is based in Lockerbie, Scotland 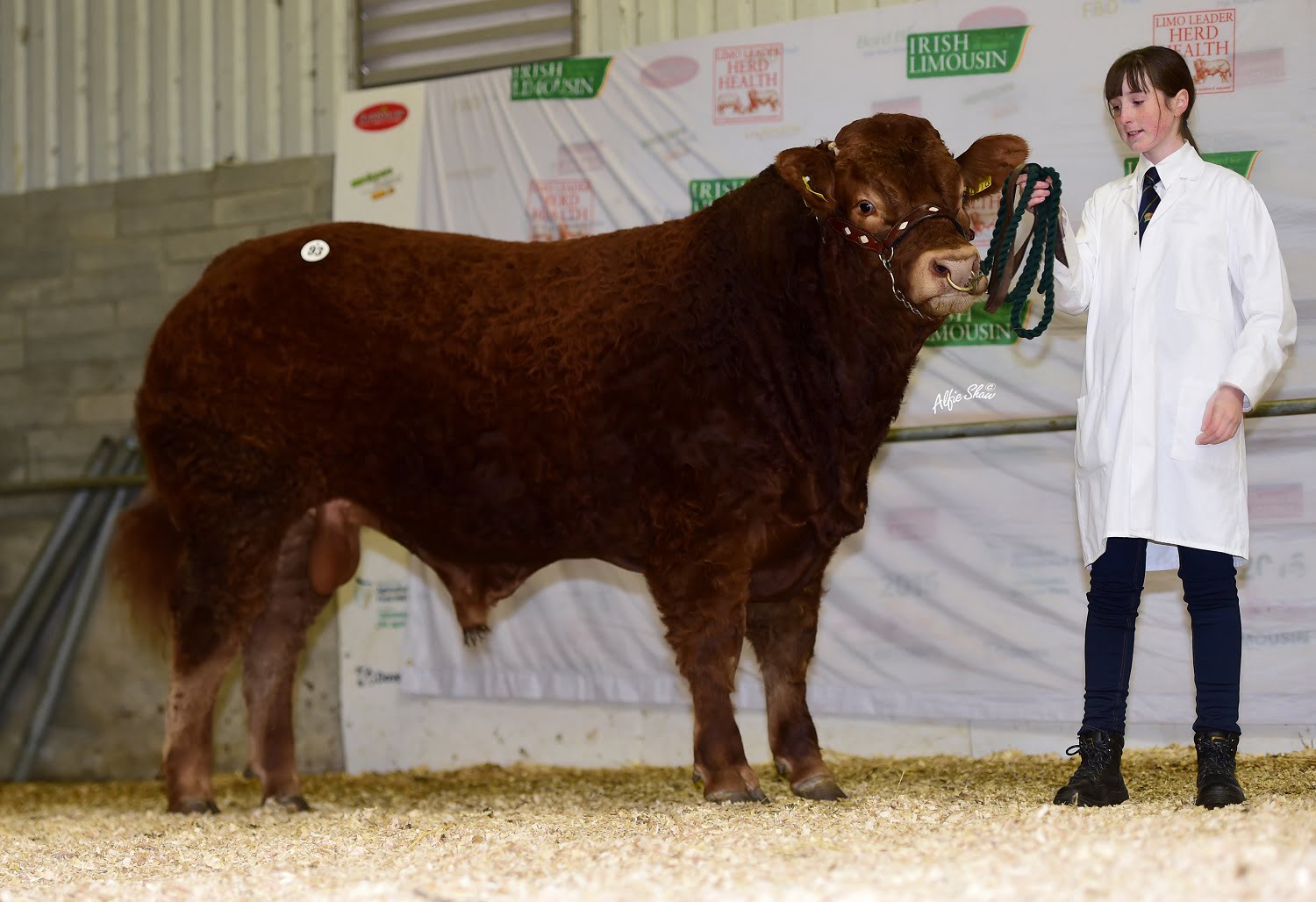 Also heading to Lockerbie is second prize winner Carrowreagh Madman, a Bavardage (AGB) son. His dam Carrowreagh Jolene has Wilodge Cerberus and Scorboro Regius in her sire stack. Madman was bred by Patrick Bruen, Elphin, Co. Roscommon. With five star ratings in most traits, this 18 month old bull caught the eye of the Cornthwaite family as an addition to their Maybe herd based in Balgray Hill, Lockerbie. Madman’s selling price was €5100. 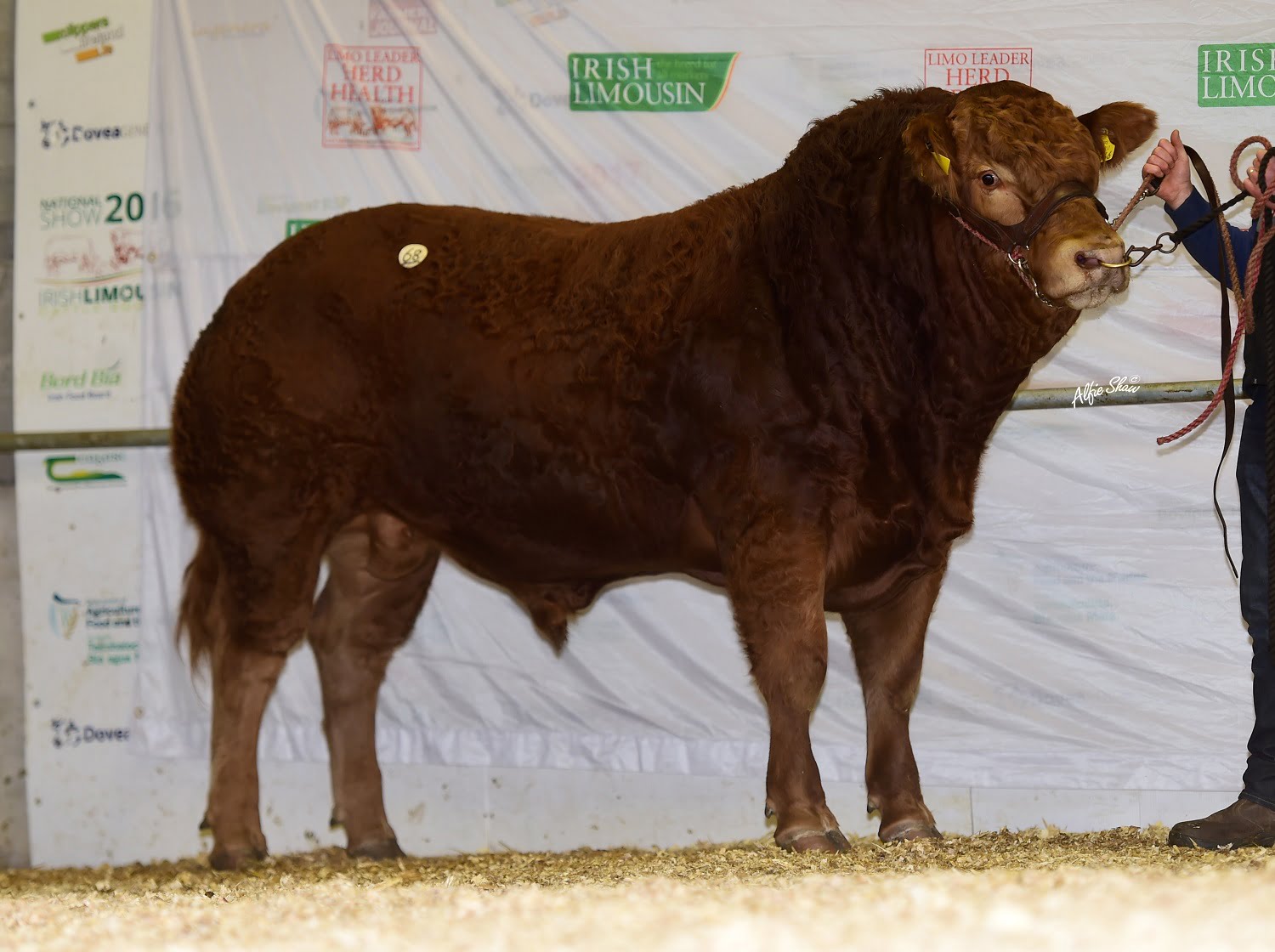 Faughill Magic and Faughill Master twin sons of Sympa (SYP) sold for a combined price of €9800. Dam of these striking 18 month old bulls is the homebred Nenuphar dam Faughill Cham Pagne. Both came to the ring with multiple five star ratings. Their muscle score is in the top 3 and 4% of the breed respectively. Magic and Master were bred by Charlie Clancy, Carrick-On-Shannon, Co. Leitrim. Master was purchased by Adrian Lanigan, Thomastown, Co. Kilkenny for €5,000, while Magic found a new home for €4,800 – he was acquired by Sean Keogan, Navan, Co. Meath. 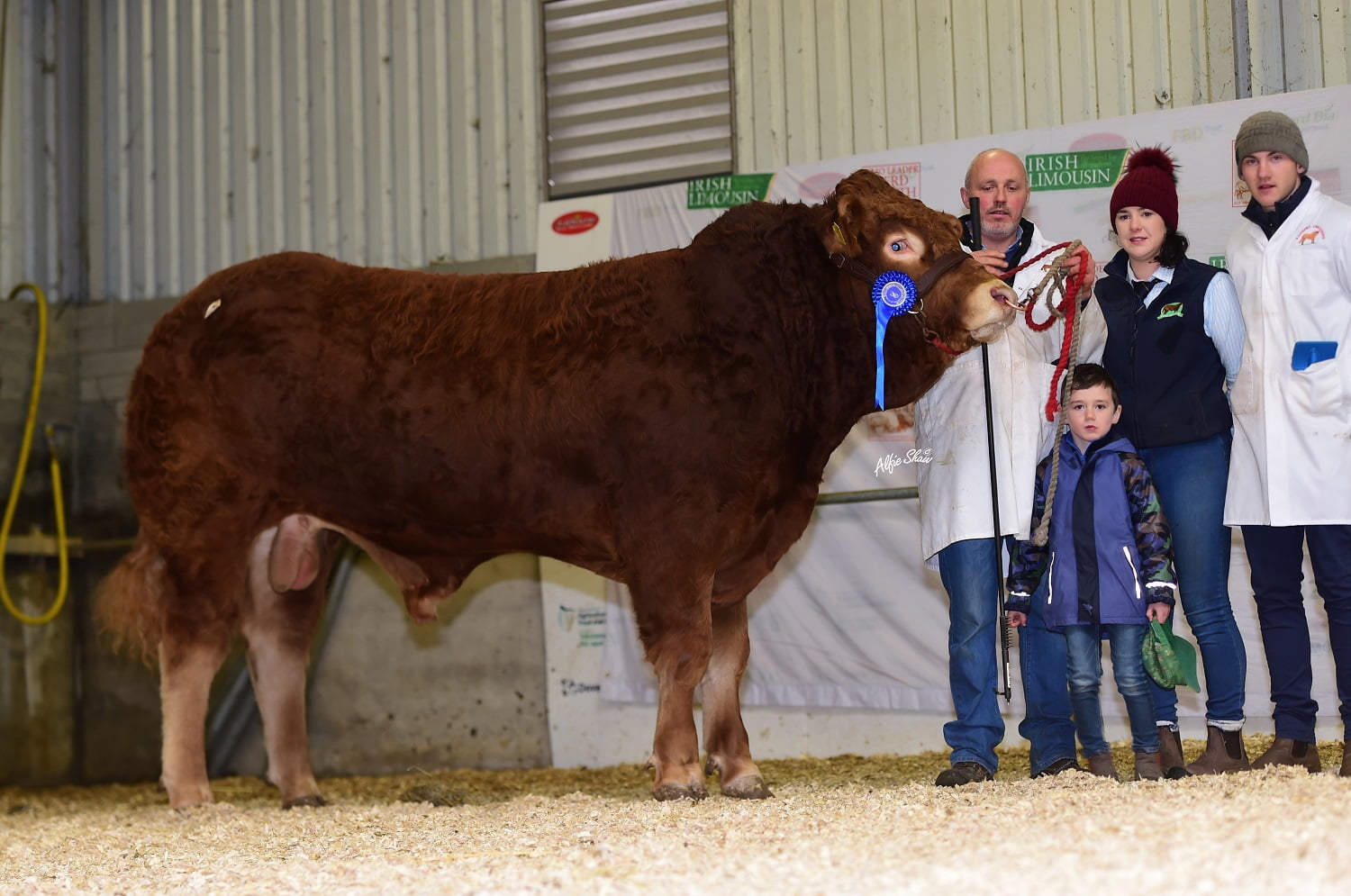 Patrick Teague, Dromore Co. Tyrone purchased Ernevalley Manhattan Et from Eddie Lynch for €4600. Manhattan is a son of Lodge Hamlet (LM4058) and Powerful Hibernia (a daughter of the renowned donor cow Clonlara Vixen (Et)). Manhattan was awarded third prize in his class in the presale show. 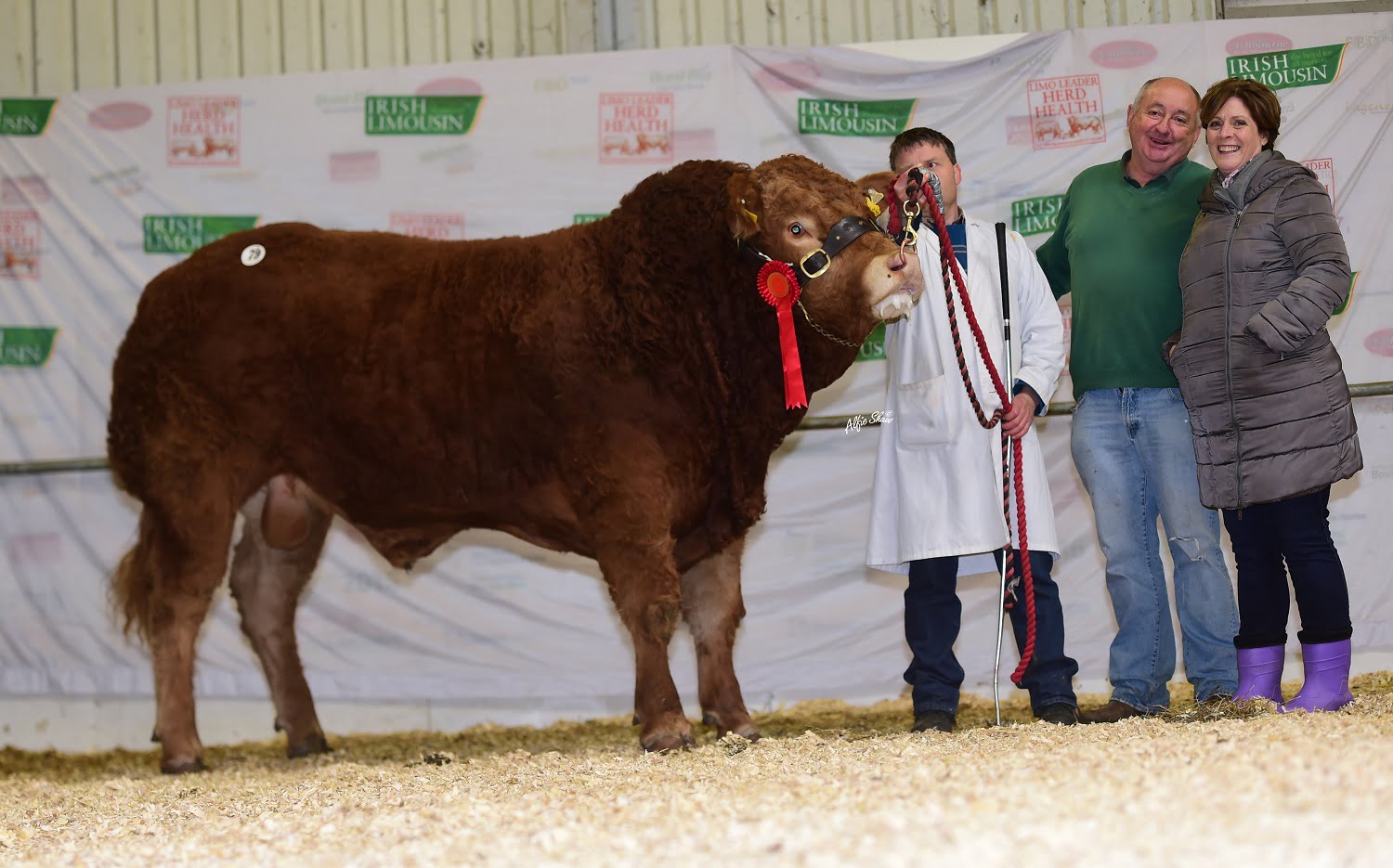 Newtown Malibu sold for €3,600. A son of Ampertaine Gigolo

Mullaghboy Moses sold for €3,100. A son of Lodge Hamlet

Currane Mcgregor sold for €3,000. A son of Cloughhead Umpire

Bremore Man Cub sold for €3,000. A son of Kaprico Eravelle

Clontown Mickey Dee sold for €2,500. A son of Ampertaine Gigolo

Ballyline Michael sold for €2,450. A son of Castleview Gazelle

Birchpark Magic sold for €2,400. A son of Raffertys Immanuel

Quilty Limousins Mason sold for €2,300. A son of Ampertaine Commander

Mill Rose Mindblowing sold for €2,200. A son of Wilodge Joskins

Knocanroe Master sold for €2,200. A son of Elderberry Galahad

Bruce Goldie awarded the Female Champion rosette to Clontown Lady Albha an exceptional heifer from Stephen Treanor, Scotstown, Co. Monaghan. Lady Albha is a daughter of Powerhouse Italic (LM2090) and the Ronick Hawk daughter Kincorragh Imax. She enjoyed a successful showing season during the summer of 2018, taking the Champion title on many occasions. Lady Albha was purchased for €7,000 by Stuart Littlewood for his Hollingreave herd based in Newmill, Huddersfield. 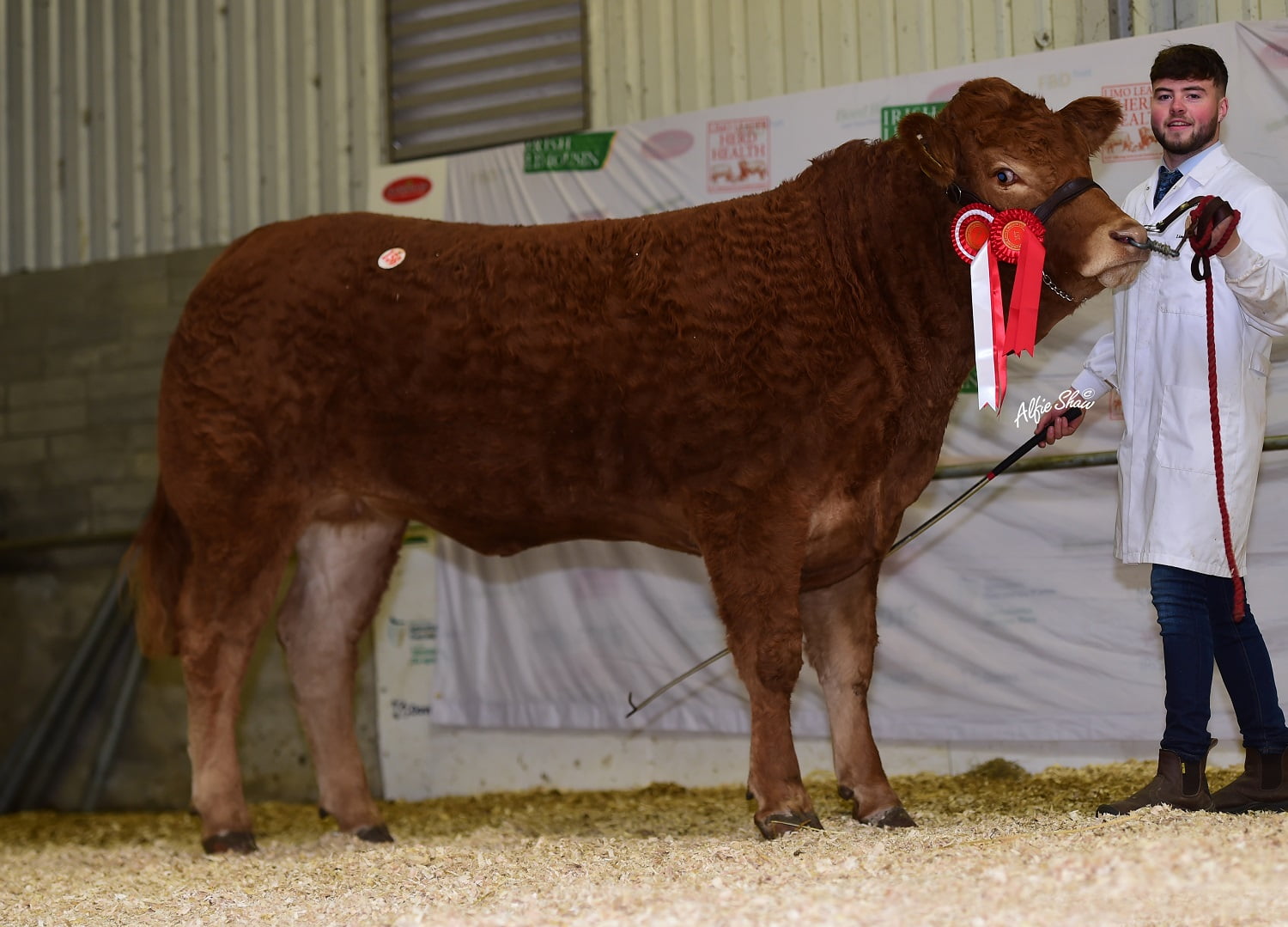 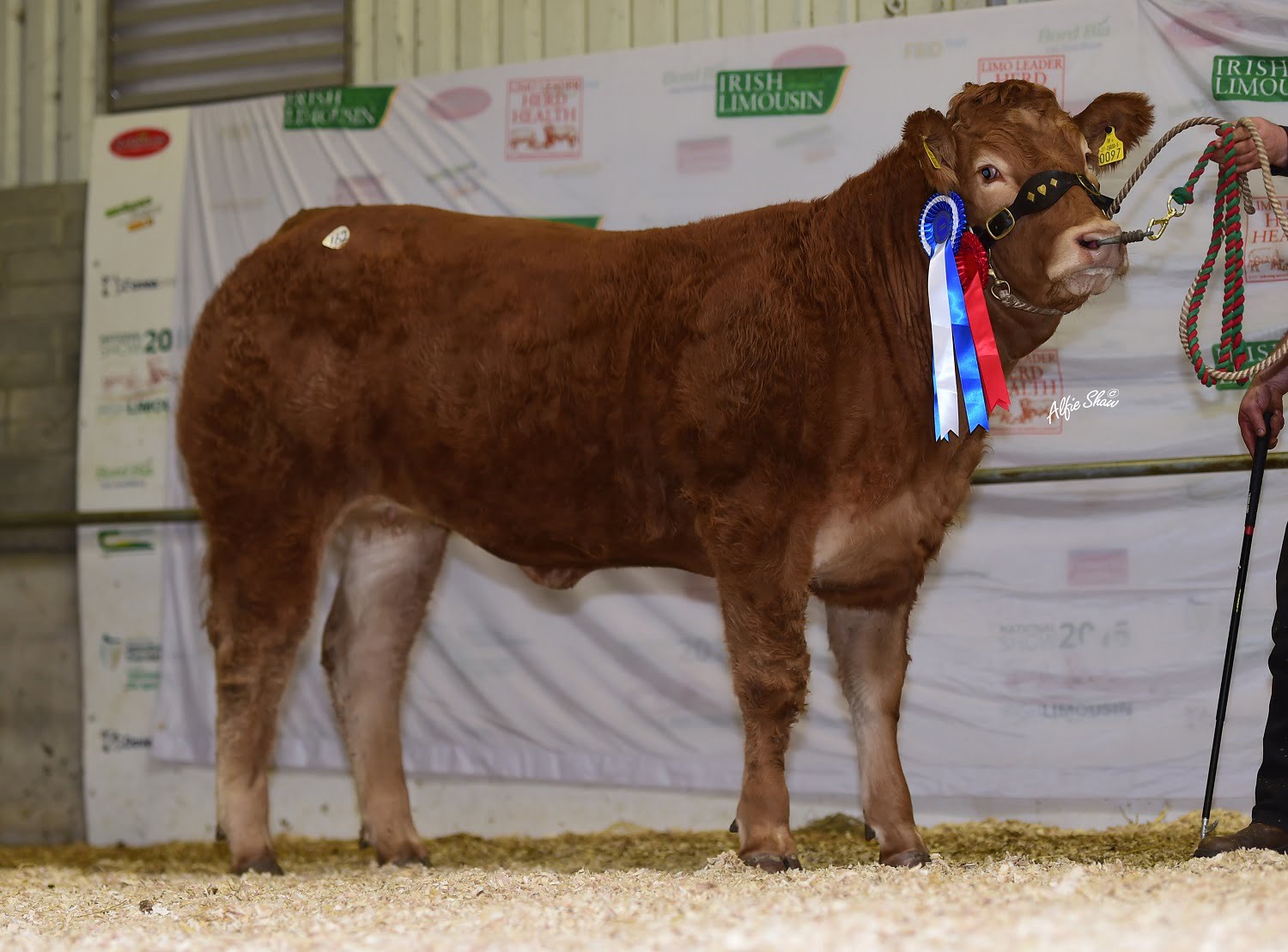 The eye-catching Glorieux (XGL) daughter Knockcoolkeare Mistic found a new home at €4900. Mistic was bred in Mount Collins, Co. Limerick by Michael Roche, her dam Castleview Gail has Ampertaine Commander and Ramses in her pedigree. Mistic has five star ratings in Replacement index, Carcass weight, Carcass conformation and Daughter milk. She was shown during the summers of 2017 and 2018 and enjoyed many successes, including at the National show. Mistic was purchased by George McCague for his Newry based Bridgeview herd. 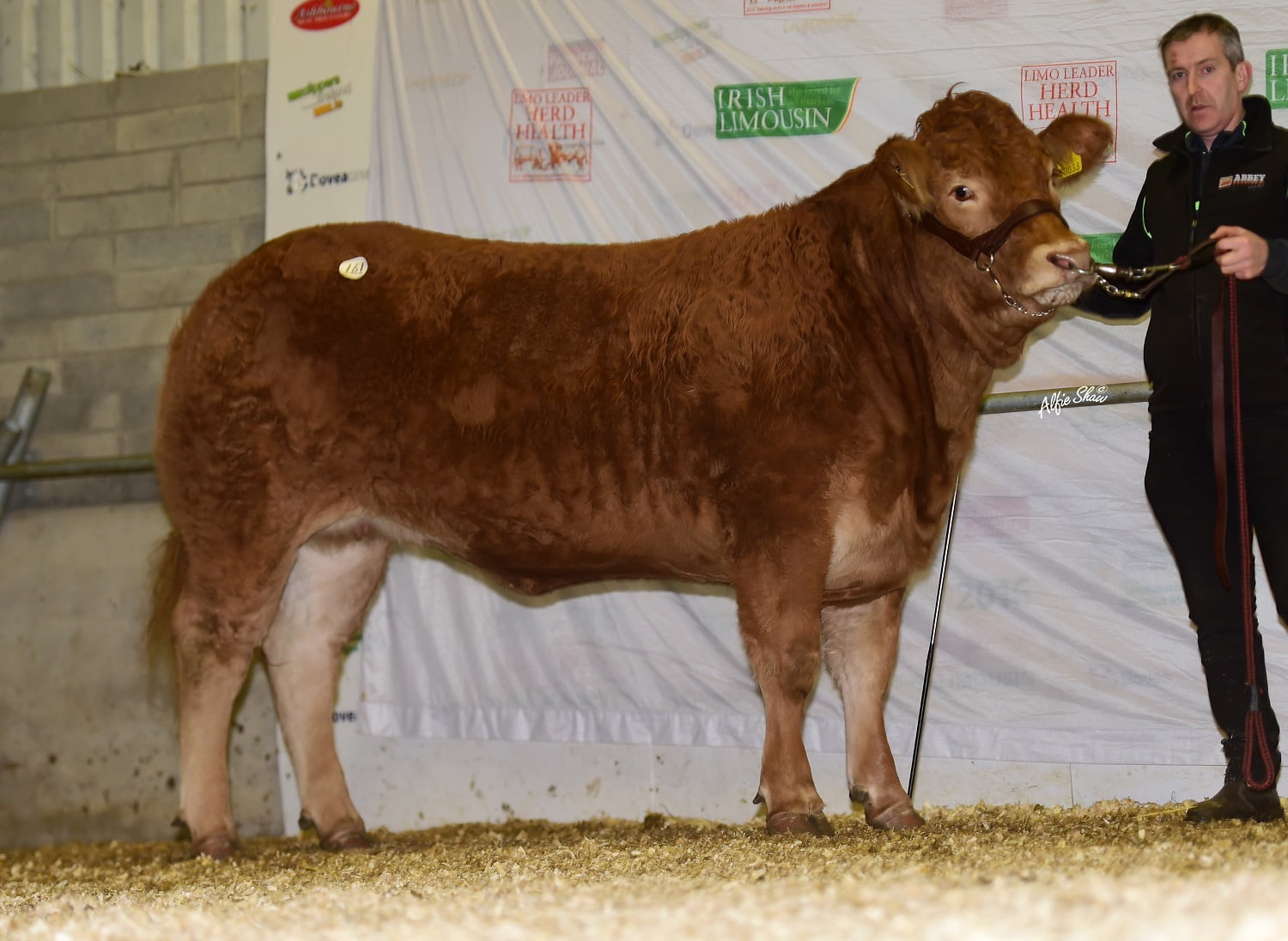 From the same yard came First prize winner Meenross Millie Et the maternal sister of the previous heifer Meenross Madagascar Et. Millie’s sire is Ampertaine Elgin. Just gone one year, she sold for €3,500 to Martin McConville, Rathfriland, Co. Down for his Glenlimo herd. 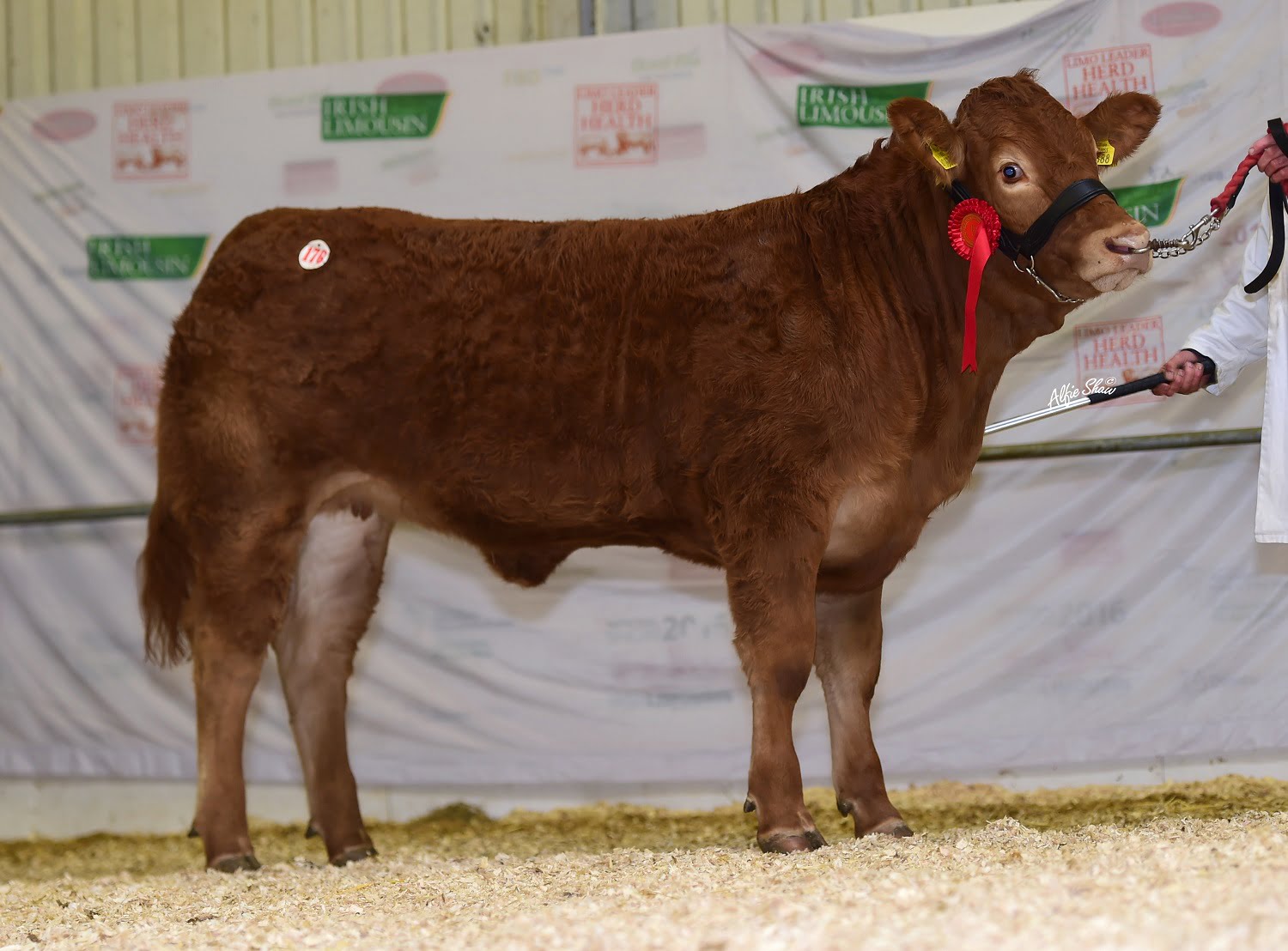 Meelickaduff Marietta, sold for €2700, a daughter of Ampertaine Foreman (S1421)

Meenross Majestic, sold for €1800, a daughter of Ampertaine Abracadabra (AIA)