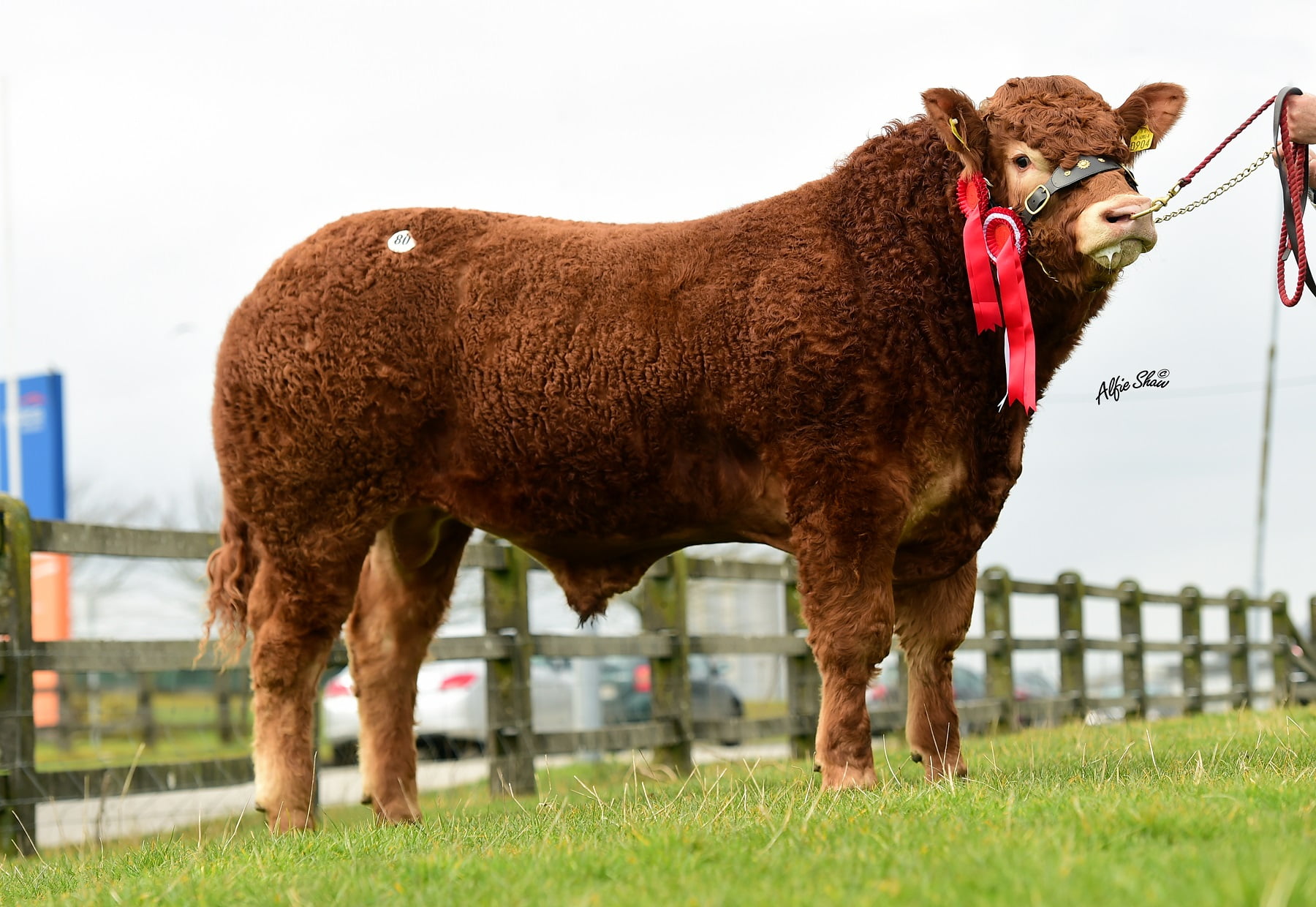 Sale season 2018 got off to a flying trade on Monday 12th March after a delayed start due to storm Emma and the copious amounts of snow that arrived in her wake. The sale was due to take place on the 5th of March, however, with freezing temperatures and impassible roads a weeks deferral was necessary.

We would like to convey our gratitude to our breeders and customers for your understanding and patience as in the interest of safety it was imperative to reschedule the sale and hold it a week later.

The first sale of the year was met with a 75% clearance and a price range from €2,200 to €13,800, with an average selling price of €3,720. The society was honoured to secure the services of Mr. David Thomlinson of the Beeches herd based at Scaleby, Carlisle, Cumbria, UK as judge for this bull sale. Mr. Thomlinson is currently the British Limousin Cattle Society’s Honorary President, he is over half way through a two-year term of office. Judging took place on Sunday evening, the sale got underway at noon on Monday. 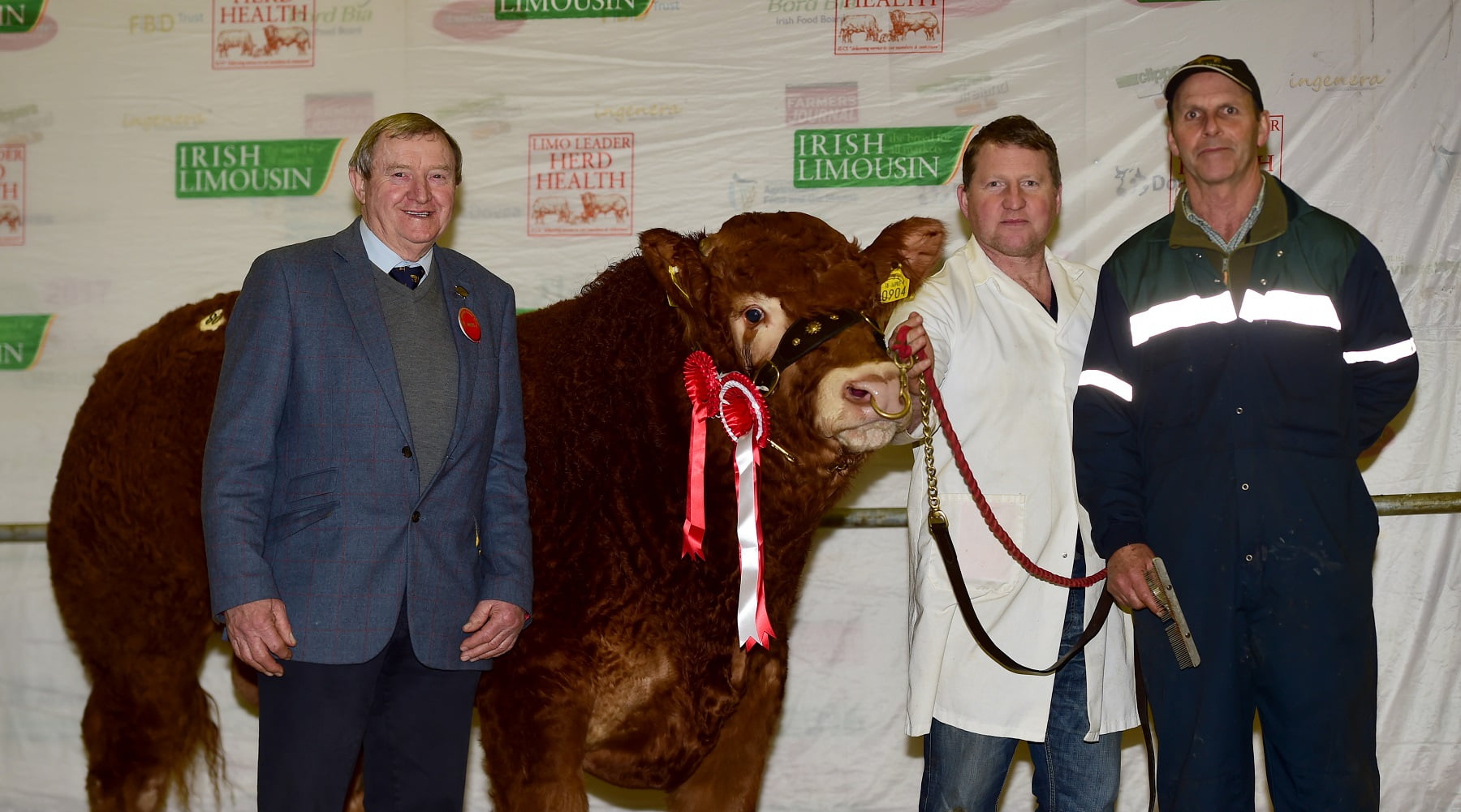 George Candler was back at the rostrum for what proved to be a lively sale. Stewards at this sale were Donal Moloney, Ann Hester and David Swaine.

Lot 80. Junior Champion and sale topper at €13,800 was Millburn Luquacious Et from Richard O’Beirne, Tuam, Co. Galway. Luquacious is a November 2016 born son of Wilodge Vantastic and Richard’s outstanding donor cow Millburn Bobby Dazzler (Et). Luquacious carries a skeletal score of 138 and a muscle score of 137 – these scores are in the top 1% and 2% within the Limousin breed. Extremely stylish and oozing style – Luquacious grabbed the attention of R & K Davidson and now heads to Corsairtly Farm, Keith, Banffshire, UK as stock sire to the Corsairtly herd.

Click here to see Millburn Luquacious in the Sale ring 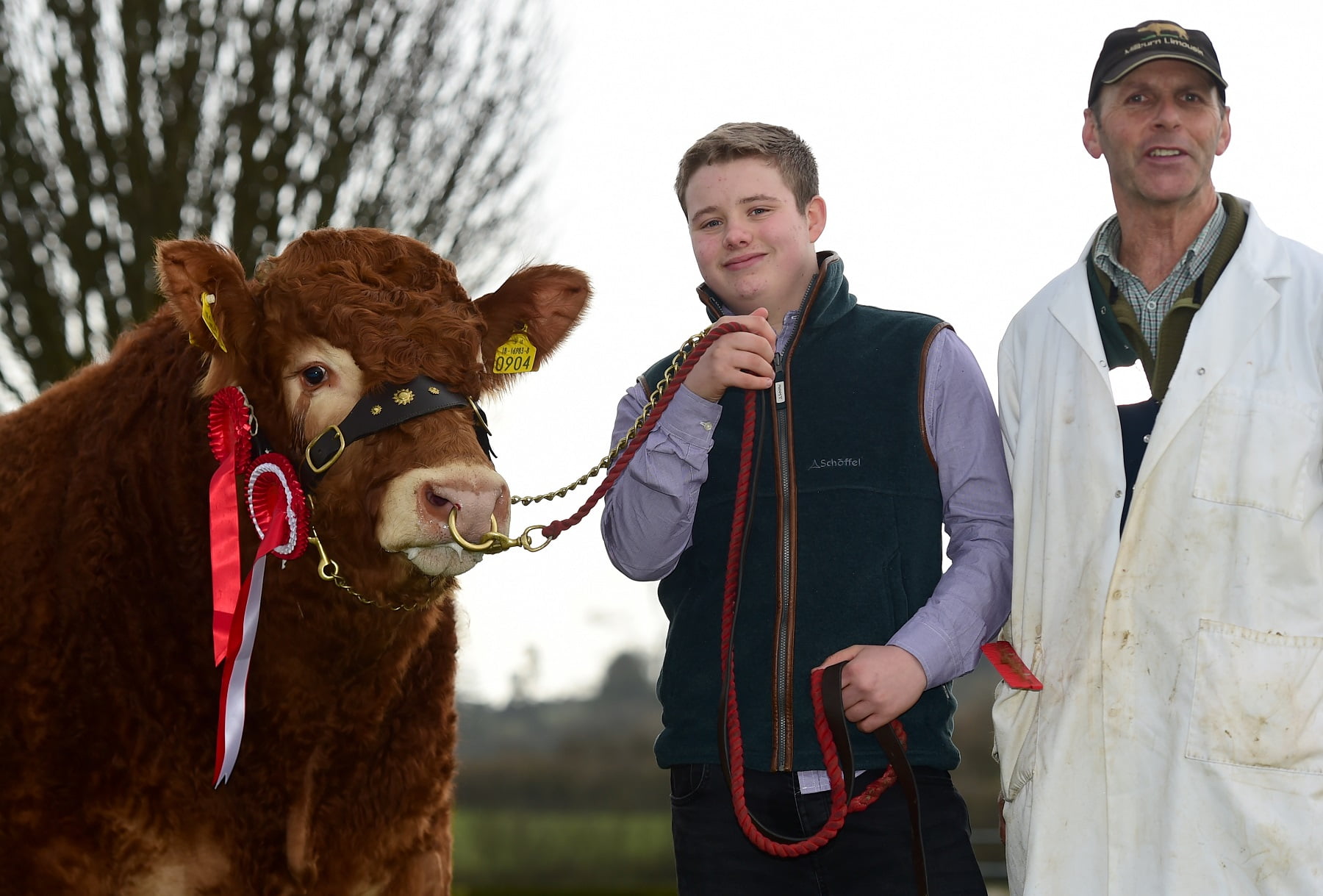 Click here to see Keltic Lonodlozi in the Sale ring 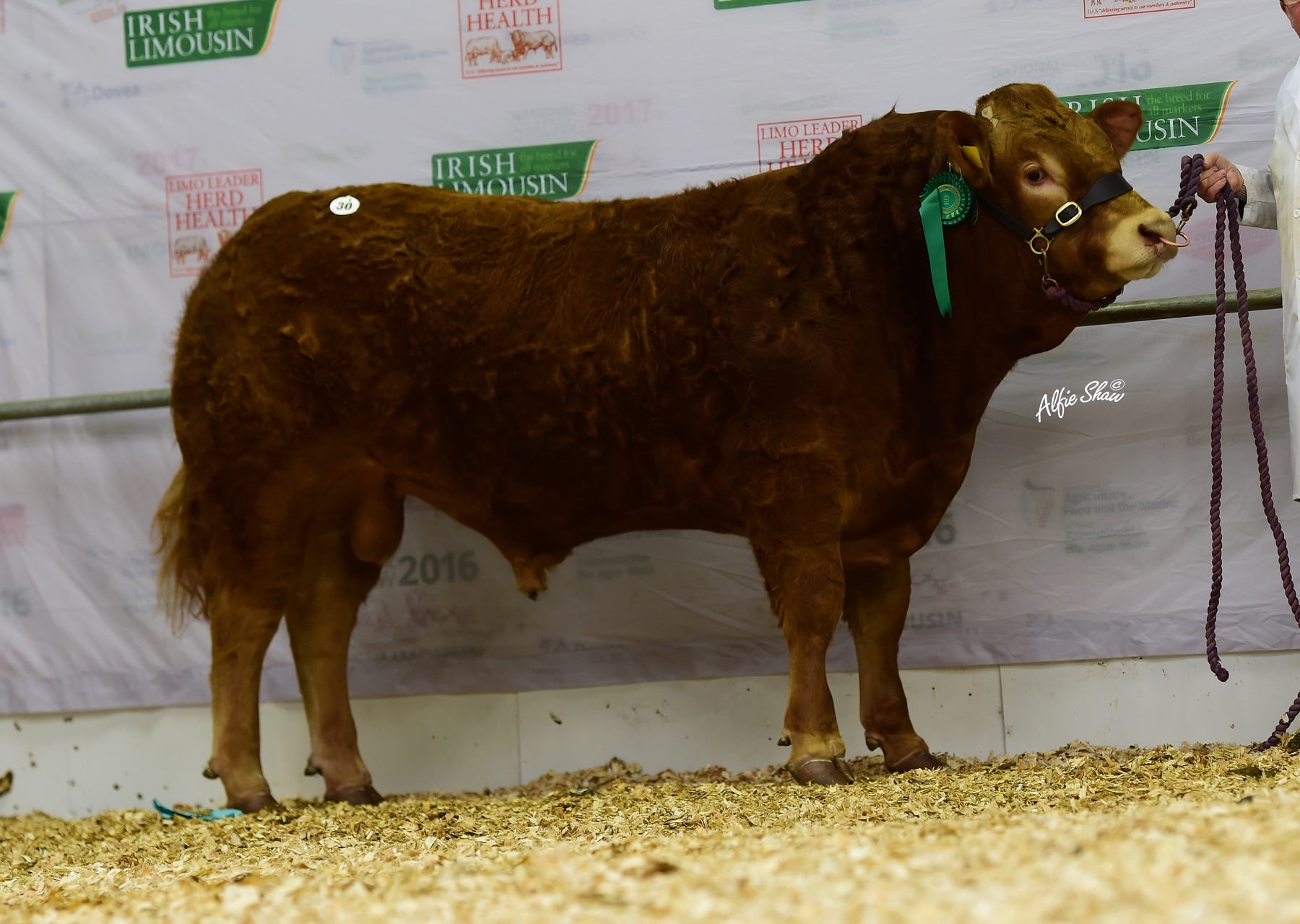 Click here to see Millburn Letterman in the Sale ring 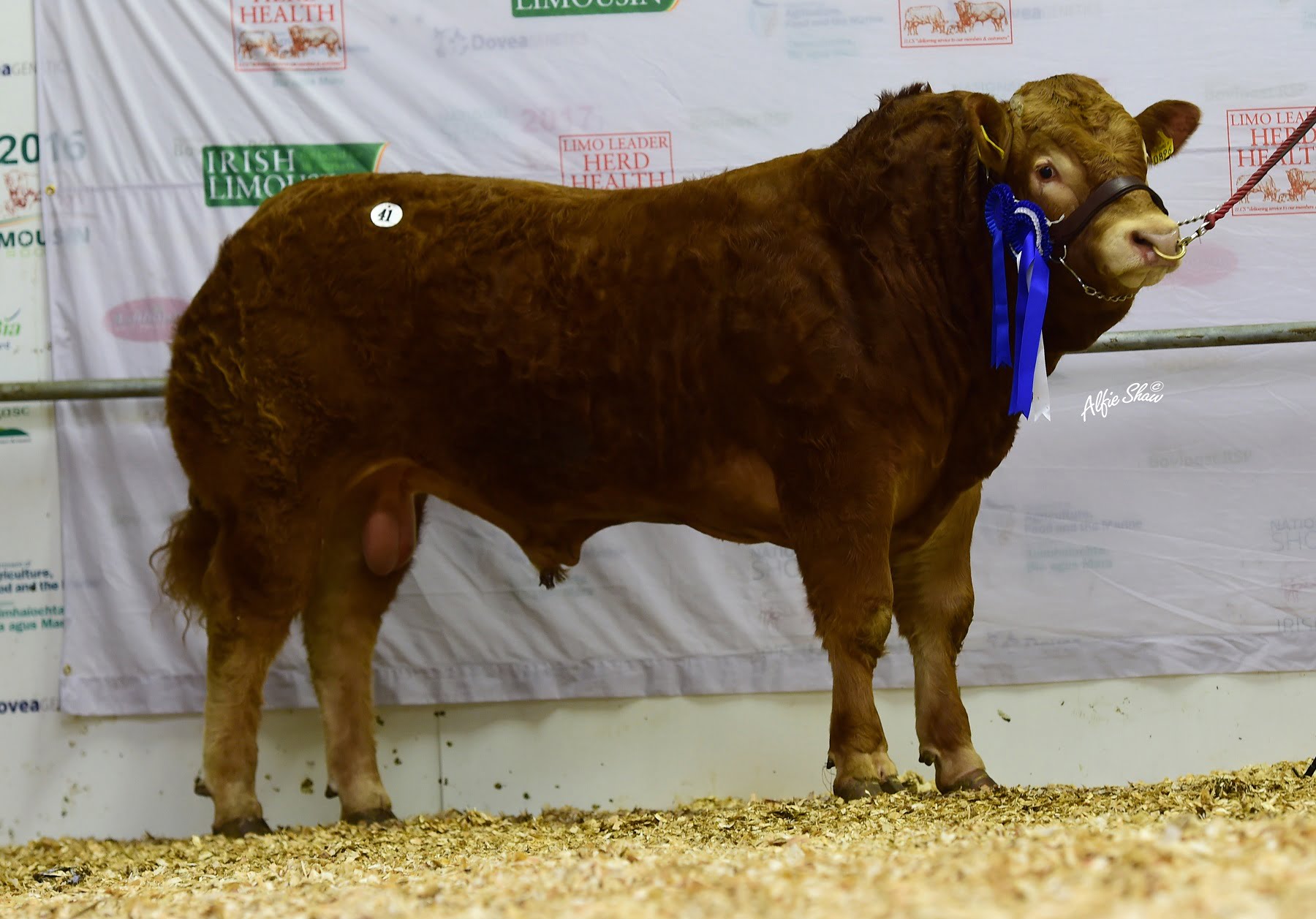 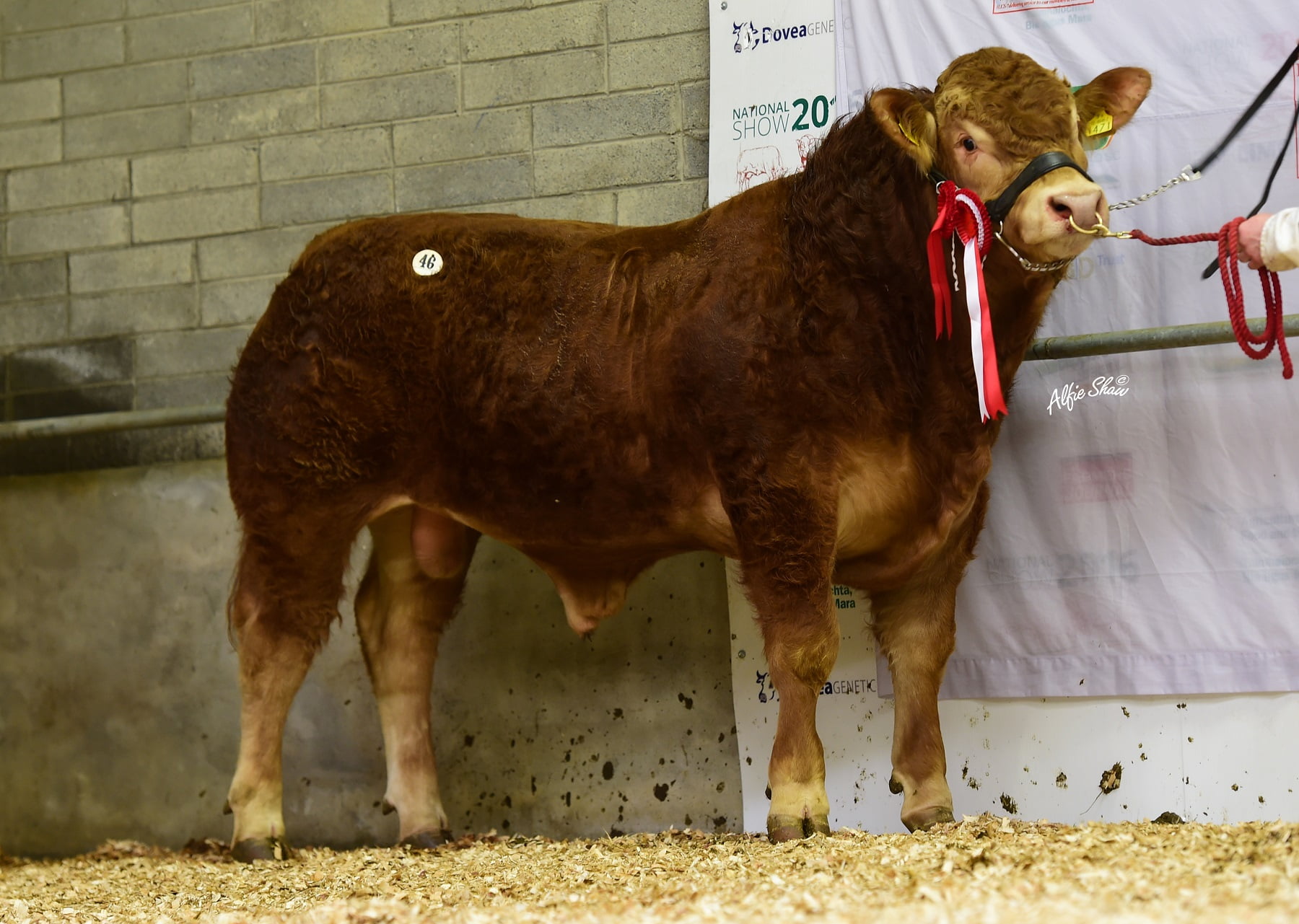 Lot 92. Kevin and Kieran Treanor two young breeders from Scotstown, Co. Monaghan presented the Reserve Junior Champion Clontown Loni. Born in December 2016, this remarkable young bull has Wilodge Cerberus, Ampertaine Elgin and Rocky in his sire stack. Loni enjoyed a tremendous show season in 2017 – picking up many championships and culminating in First prize at the National All Ireland Limousin Bull Born on/between 1/11/16 and 31/12/16 class at the National show. Loni was snapped up for €5,000 by Walter Wight for his renowned Monkeypuzzle herd based in St Boswells, Melrose, Scottish Borders.

Click here to see Clontown Loni in the Sale ring 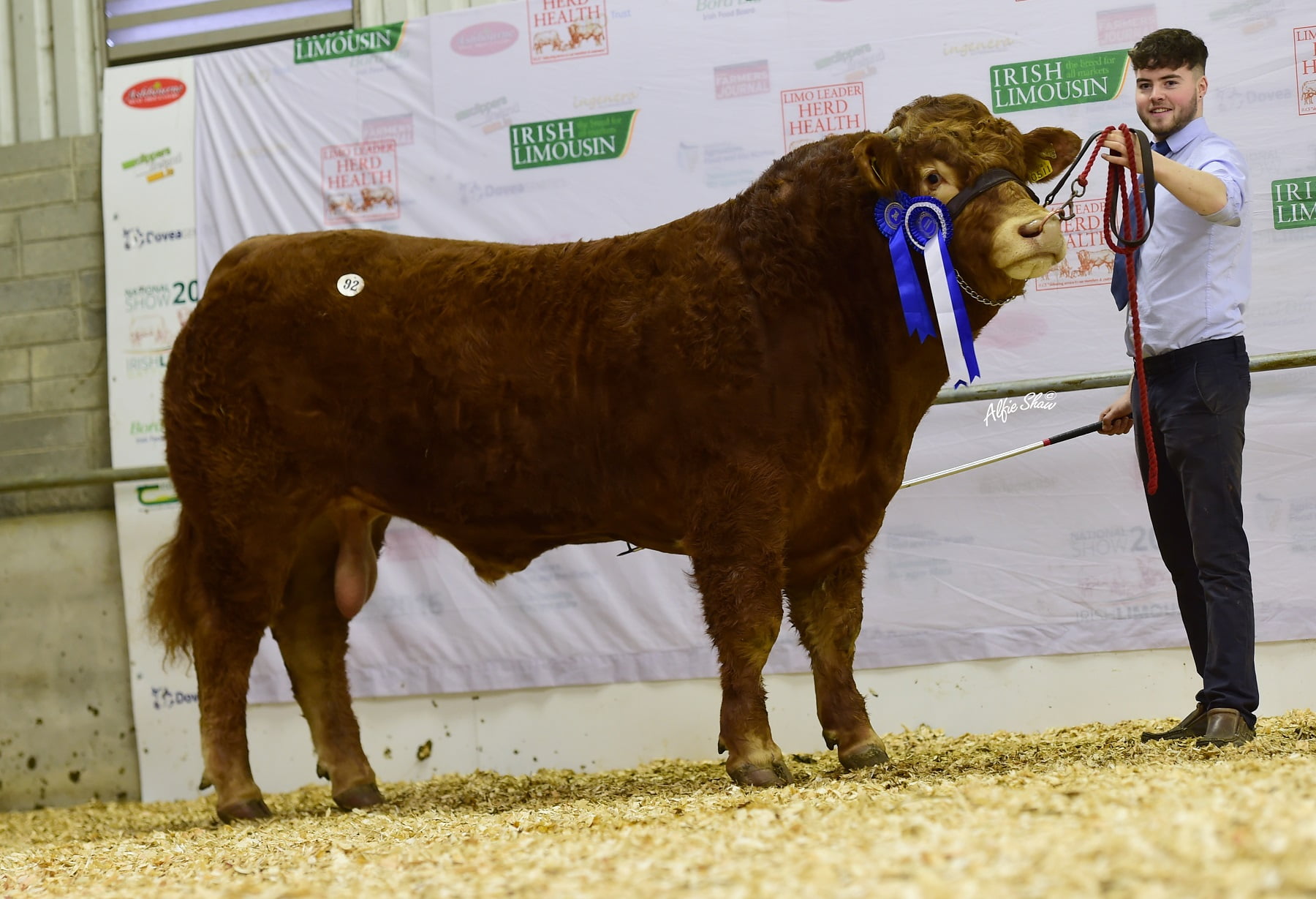 Lot 36. Also heading to the UK is Cavelands Lord from the herd of Paul Sykes, Ballyhaunis, Co. Mayo. Lord has Hamac, Ronick Hawk and Mas Du Clo in his lineage. Hamac (LM4095) has an outcross pedigree. Lord has five star ratings in Terminal index, Replacement index, Docility, Carcass weight and Carcass conformation. After a flurry of bids the gavel fell at €4,800 to K. Stewart & Sons, Huntly, Aberdeenshire, they acquired Lord for their Greenhaugh herd.

Click here to see Cavelands Lord in the Sale ring 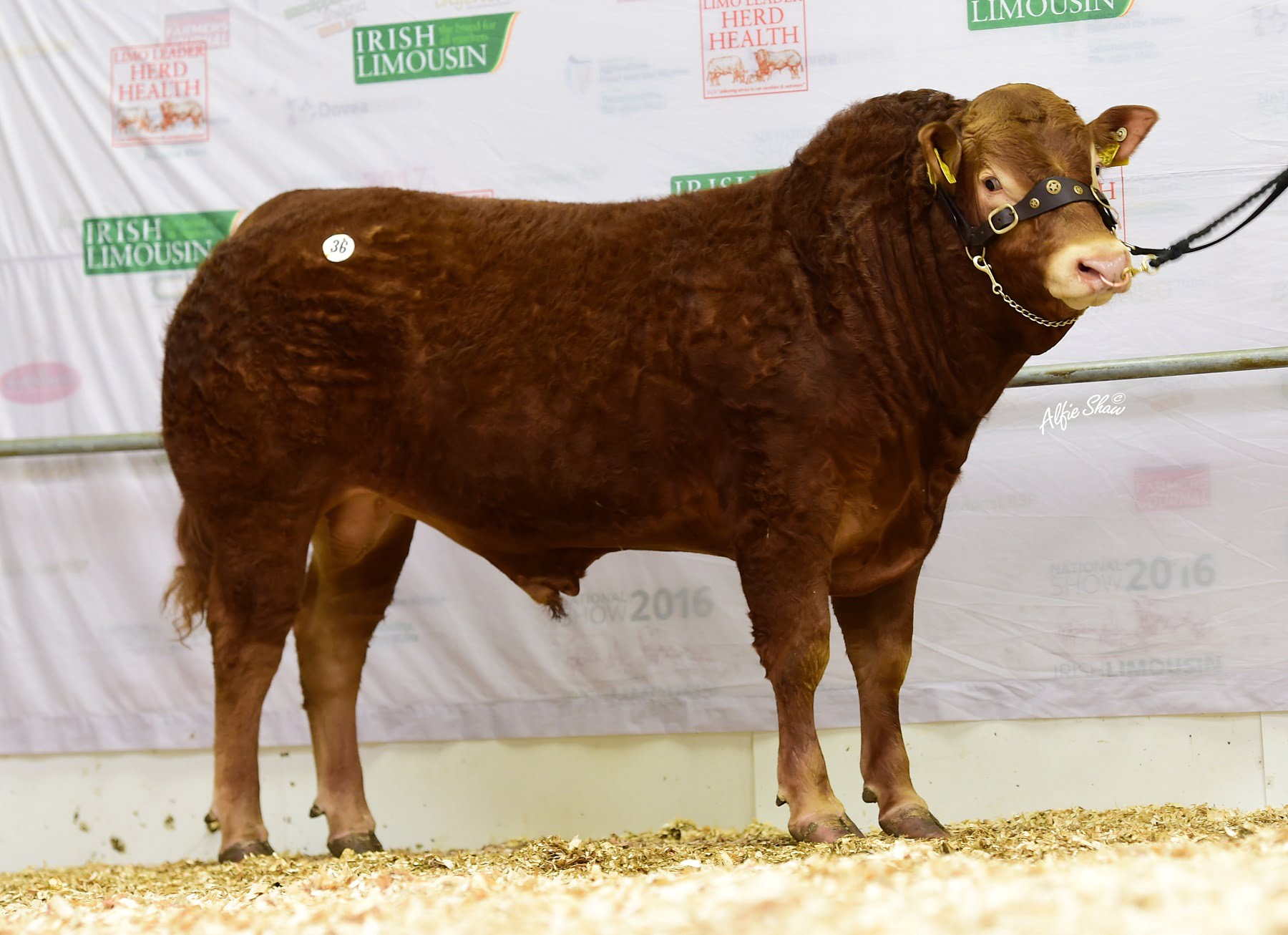 Lot 2. The oldest bull offered for sale was Aloor Lunt from the herd of Patsy Creighton, Castlerea, Co. Roscommon. Lunt is a son of Fieldson Alfy (S511) and the home bred Rocky daughter Aloor Ebony. Lunt was one of two bulls purchased by Mike and Helen Kissane, Cahirciveen, Co. Kerry. The purchase price for first prize winning Lunt was €4,200. 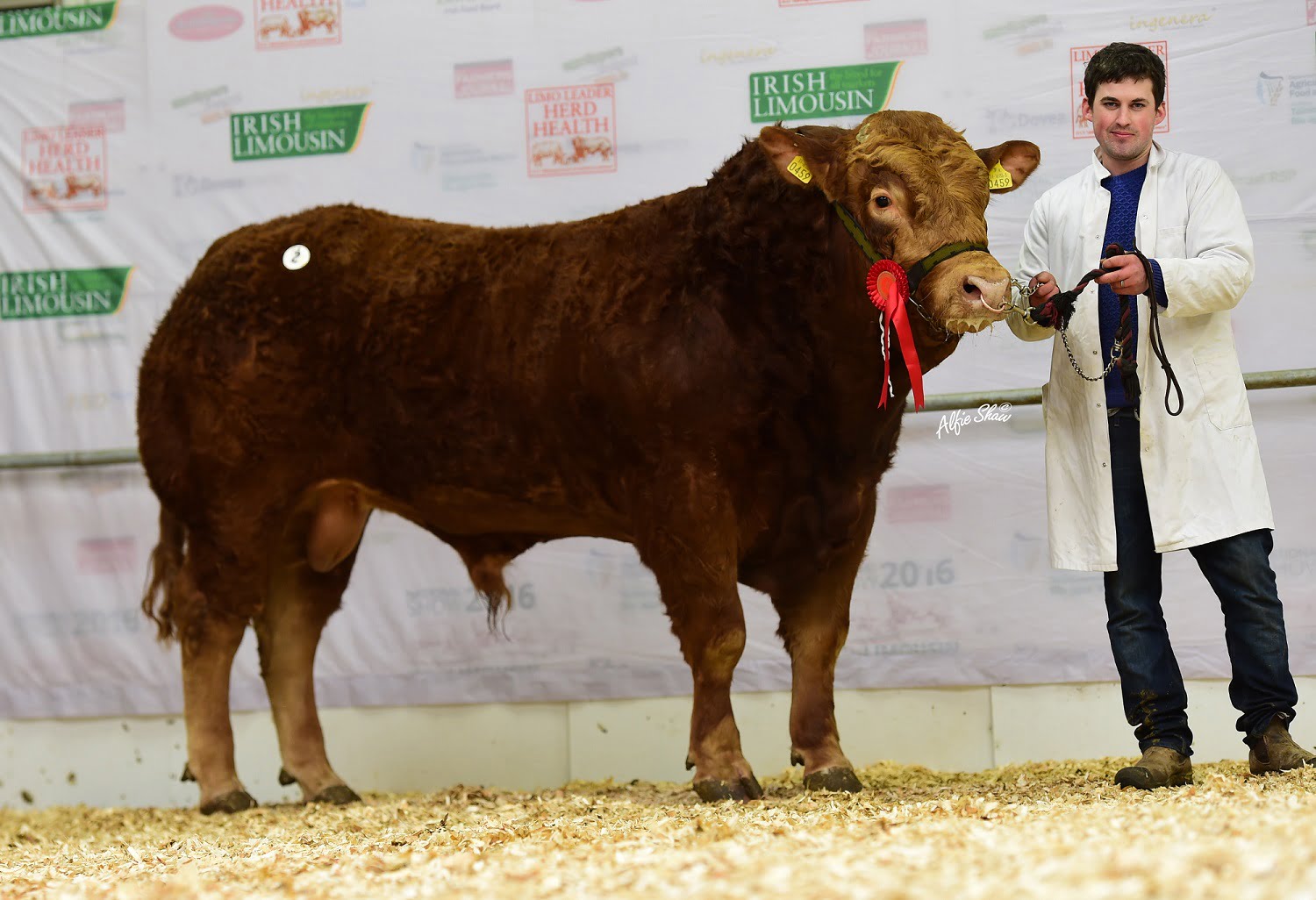 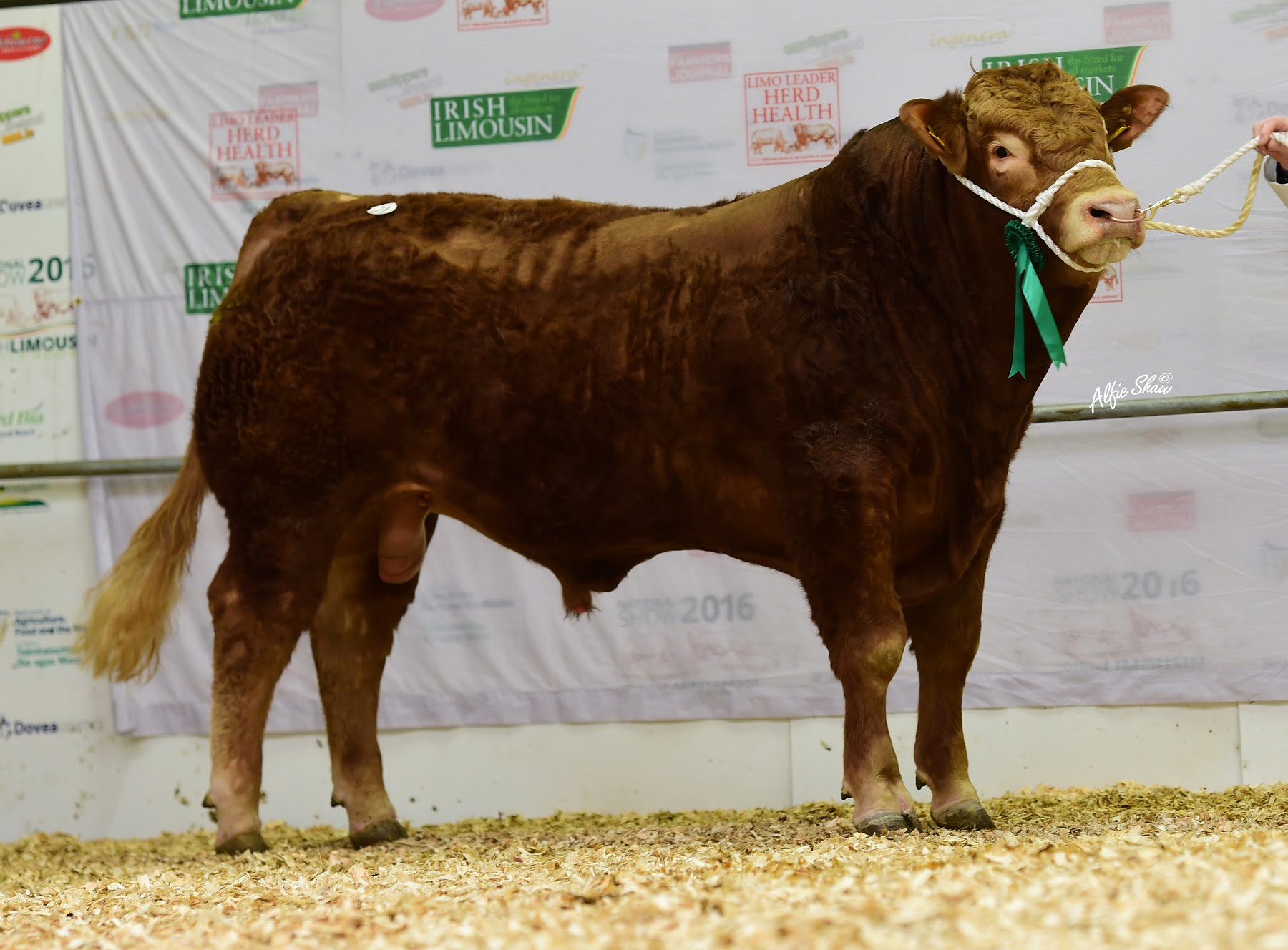 Lot 87. Rounding off a great days trading for Richard O’Beirne was his third prize winner Millburn Landmark Et. Landmark sold for €4,000 to Brendan Delaney, Mountrath, Co. Laois. This 13 month old bull has five star ratings in most traits, he is a son of Wilodge Cerberus (WGE) and the Imperial daughter Vern Blossom.

Lot 9. Gaggin Liberty Et from the herd of Patrick Hegarty, Bandon, Co. Cork also sold for €3,900. Liberty has Wilodge Enrico, Roundhill Nero and Poulnasherry Crusader in his back pedigree. With five star ratings in most traits Liberty was acquired by a county Wexford based farmer.

Lot 16 and Lot 90. David Armitage, Kilcullen, Co. Kildare purchased two bulls for €3,600. First at this price was Tom Harney’s Finboy Leonardo a first prize winner. Leonardo is a son of Wilodge Cerberus and the Nenuphar dam Carrefour Cathy. David’s second acquisition was Brooklands Lightning, a Gamin son, bred by Clive Jennings, Enniskeane, Co. Cork. Lightning has five star ratings in many traits, including a Terminal index of €138 and a Replacement index of €106.

The next society sale will be held on Friday evening the 16th March at Gort Mart. Nineteen bulls are offered for sale at 7pm.