Demand for bulls with 81% clearance at Roscommon sale

Home » Demand for bulls with 81% clearance at Roscommon sale 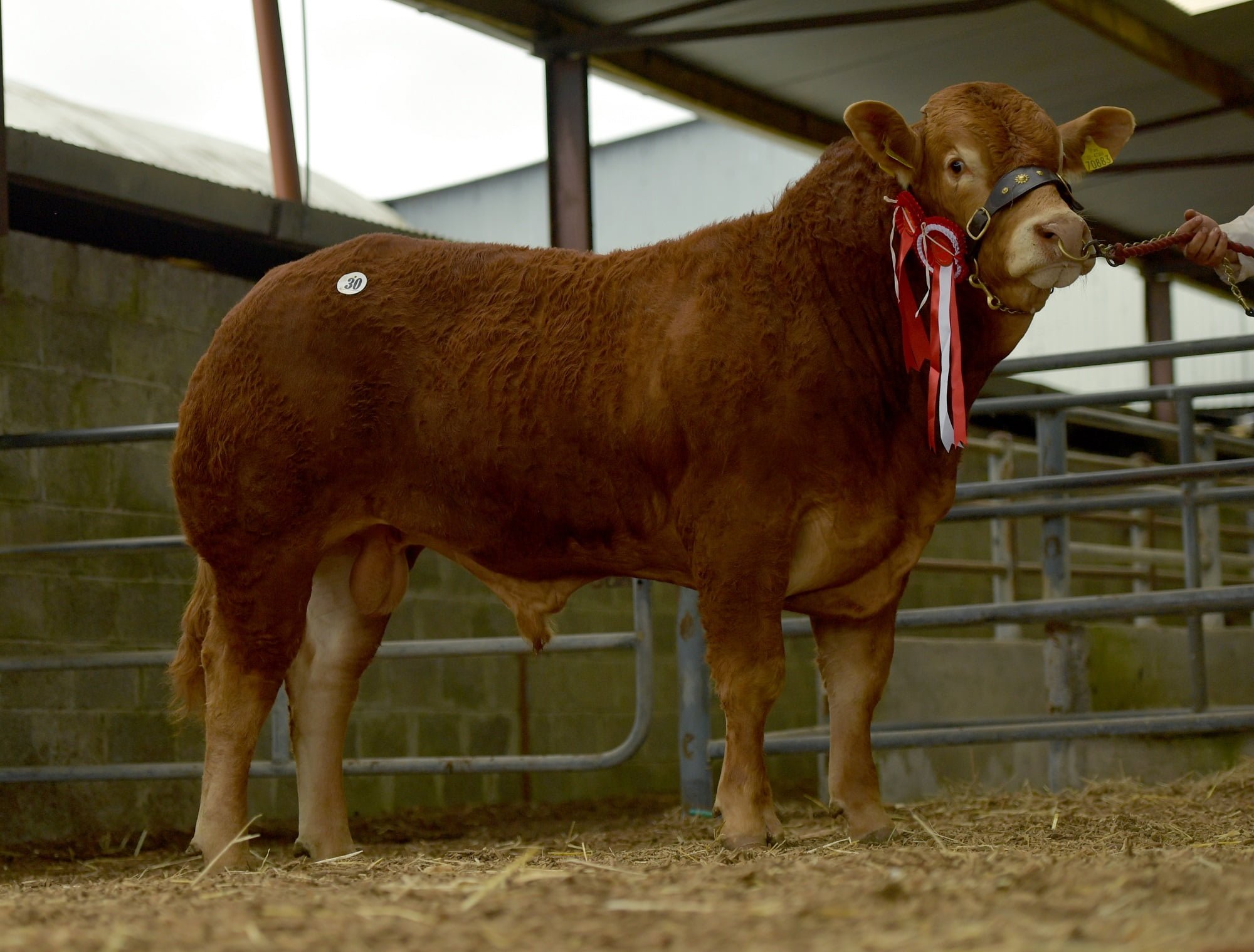 Roscommon show and sale for 2019 was held on Saturday 25th May. The sale met with a clearance of eighty one percent of the bulls presented with an average selling price of €2,673. Judge for the pre-sale show was Orla Curtin of Clarina, Co. Limerick. Orla is a member of the Irish Limousin YMA and is very involved with her families Corcamore pedigree herd.

The top price of €3,500 was reached by two bulls. First at this price was the first prize winning Bavardage son Wood Road Morgan Et from the herd of Noel Fennessy, Castleconnell, Co. Limerick. Morgan’s dam is Noel’s renowned donor French imported cow Claque, her offspring are regular show and sale toppers. With five star ratings in almost all traits and a predicted calving difficulty of 4.5% – Morgan was the pick of Danny Tighe for his herd in Balla, Co. Mayo.

County Kildare based Frank Byrne acquired Ballinascraw Moonshine for €3,200. Moonshine is a 4th prize winning son of Norman Inventor and the Tricot-Mn dam Ballinascraw Jewel. Born in December 2017, Moonshine has an array of five star ratings and the easiest predicted calving figure in the catalogue of 3.3%. Moonshine was bred by John & Stephen Lynch, Ballinalee, Co. Longford.

First prize winner Cross M 408, a son of Plumtree Fantastic also realised €3,000. M 408 was bred in Westport, Co. Mayo by Thomas Feehan. He has five star ratings in Terminal index, Carcass weight and Carcass conformation. He was acquired by a Portlaoise based farmer.

An Athlone based farmer purchased Quilty Limousins Notorious for €3,000. Notorious is a 15 month old son of Ampertaine Foreman. He was bred by Martin McGannon, Ennis. He carries a Terminal index of €175 and a Replacement index of €136.

Multi-starred Lough Conn Notable sold for €2,900. Notable is a first prize winning son of Kaprico Eravelle and the home-bred Ionesco dam Lough Conn Kimberly. He was bred in Ballina, Co. Mayo by Richard Hegerty. With five star ratings in almost every trait this young bull was the pick of Sligo based Declan Brennan.

Sweetwood Nipper, a second prize winner sold for €2,800. Nipper was bred by Oliver & Cyril Loughlin, Dromahair, Co. Leitrim. He is a son of Sweetwood Grace (a Sympa daughter) and Cloughhead Umpire. Nipper has five star ratings in Docility, Carcass weight and Carcass conformation. He was purchased by Joe Maquire from Westmeath.

Thomas Swaine, Enniscorthy, Co. Wexford sold Farmleigh Nemo for €2,750. Nemo is steeped in Farmleigh genetics – his sire is Farmleigh Jager (an Ampertaine Commander son) while his dam Farmleigh Hermymie is a daughter of On-dit. Fifteen month old Nemo has an array of five star ratings. He was purchased by Kilkenny based Joseph Walsh.

Reserve Champion Female Mullaghboy Marie was bed by Matthew Fee, Corrawallen, Co. Leitrim. Marie has Chatelain, Wilodge Cerberus and Gamin in her sire stack. She failed to meet her reserve and left the ring unsold.

Teleri Thomas of the highly regarded Keltic herd offered a consignment of heifers for sale after the society sale. There was keen interest in the bloodlines on offer which resulted in a 100% clearance.

Top price of €3,600 went to Keltic Molly a daughter of Kaprico Eravelle and Keltic Jess (an Ampertaine Commander daughter). Molly was born in September 2017, she was purchased by Thomas Flaherty.

Selling at €3,300 was Keltic Milly, the twin sister of top-priced Molly. Milly was purchased by Eddie Lynch.

€3,100 was paid by Gerard Feeley for Keltic Maeve, an in-calf daughter of Cameos and the Attirant dam Keltic Glamourqueen. Cameos was sold in calf to Keltic Handsome (OKH).

Keltic Noblequeen sold for €2,900. Noblequeen has Castleview Gazelle, Wilodge Cerberus and Mas Du Clo in her sire stack. She was acquired by Vincent O’Sullivan.

€2,300 was paid by Thomas Flaherty for Keltic Meg. This in calf heifer is a daughter of Haltcliffe Gunner. She is in calf to OKH.

At the same price was Keltic Mabon. This August 2017 born heifer has Kaprico Eravelle, Cloughhead Lord and Greenwell Manager in her lineage. She was purchased by Michael Sexton.

€2,000 was top call for Keltic Manon and in calf daughter of OKH. Thomas Flaherty purchased Manon.

The Keltic Isaac daughter Keltic Marigold was purchased by Eamon Donoghue for €1,900.

The youngest heifer on offer 12 month old Keltic Nectar was purchased by Martin Mannion for €1,450. Nectar has Castleview Gazelle, Homebyres Vistor and Ronick Hawk in her sire stack.

Many thanks to all purchasers here in Roscommon – we wish you well with your acquisitions. Thanks to our auctioneer George, stewards Donal and Brendan. Many thanks to the management and staff in Roscommon mart for all your assistance and support.

The next society show and sale will be held on Friday evening the 31st May in Granard, Co. Longford. The show starts at 4.30 with the sale starting at 7pm. The Catalogue of 19 bulls and 1 heifer can be viewed by clicking here.