Sliabh Felim Mourinho, an outstanding Kaprico Eravelle son topped the May Premier Show and Sale when he sold for the sales highest price of €11,000 in Roscrea Mart on Saturday 11th May 2019. Bred in Cappamore, Co. Limerick by Sean Ryan, Mourinho was born in August 2017 to the homebred Bavardage daughter Sliabh Felim Jenny. The second son of Jenny to come to market he outshone his brother’s achievement of last year, Sliabh Felim Leo was tapped out as Champion and sold for the Tullamore Sale highest price of €5,000. Mourinho was Larry Crilly’s (the show judge) pick as Reserve Senior Champion – the Champion also coming from the same class, he caught the eye of several discerning bidders, with his eventual buyer being Mr. Ian Nimmo of the noted Maraiscote herd based in Bogside Farm, North Lanarkshire, Scotland. The Nimmo family are regular visitors to these shores and have in the past purchased their stock sires in Roscrea. Mourinho, along with being very eye-catching also boasted five star ratings in almost all traits coupled with a Muscle score of 139 and a skeletal score of 118.

€6,200 secured the eye-catching 13 month old Clonbonny Nenuphar for Paraic Fagan’s Westmeath based herd. Nenuphar a second prize winner came to the ring with five star ratings in Terminal index, Replacement index, Docility, Carcass weight, Carcass conformation and Daughter calving. Nenuphar was bred in Athlone, Co. Westmeath by Tony Hartnett. His dam Gerrygullinane Jodi – excelled on the show circuit winning at many shows as a heifer. Jodi has Fieldson Alfy and Nimbus-Mn in her sire stack.

Brackan Nacho from the herd of Padraig Gormley, Carrigallen, Co. Leitrim claimed the Junior Reserve Championship. Born on St. Patrick’s Day 2018, this classy young bull is a son of Gerrygullinane Glen and the Plumtree Deus daughter Esker-Hill Jacintha Et. Last year in Roscommon show and sale Nacho’s maternal brother Brackan Major also took the Reserve Championship and sold for the sales top price. With an array of five star ratings Nacho was the pick of an overseas customer for €5,600.

Second prize winner Killcastle Macgregor Et sold for €5,400. Macgregor was bred in Moate, Co. Westmeath by A & P Kelly. His dam Killcastle Gina Monique 1 Et is a consistent exceptional breeder. His sire is the legendary Ideal 23. With five star indexes in Terminal Index, Replacement index, Carcass weight and Carcass conformation, 18 month old Macgregor was purchased by Hugh Brady for his Cavan based herd.

Ballinascraw Mcgregor from the herd of John & Stephen Lynch, Ballinalee, Co. Longford sold for €5,000. Mcgregor has a 5-star Replacement index value of €221 (to date the highest Limousin Replacement index recorded by ICBF), along with 5-star indexes in all other traits. Mcgregor is a son of Kaprico Eravelle and the Ampertaine Commander daughter Ballinascraw Golden Girl. David Coyne acquired Mcgregor for his Tipperary based herd.

Commanding a selling price of €4,500 was first prize winner Coraghy Maximilian Et. Born in September 2017, Maximilian has Ampertaine Gigolo, Objat and Wilodge Vantastic in his sire stack. He was bred by Thomas O’Harte, Clones, Co. Monaghan and was purchased by dual purchasers the O’Sullivan family of Cahersiveen, Co. Kerry to run with their sizable suckler herd.

Also acquired by the O’Sullivan family was first prize winner Newtown Newman. Bred in Newtowngore, Co. Leitrim by Stanley Richardson – Newman has Netherhall Jackpot, Wilodge Cerberus and Cloughhead Lord in his pedigree. Newman has five star ratings in Terminal index, Carcass weight and Carcass conformation. He was secured for €4,000. 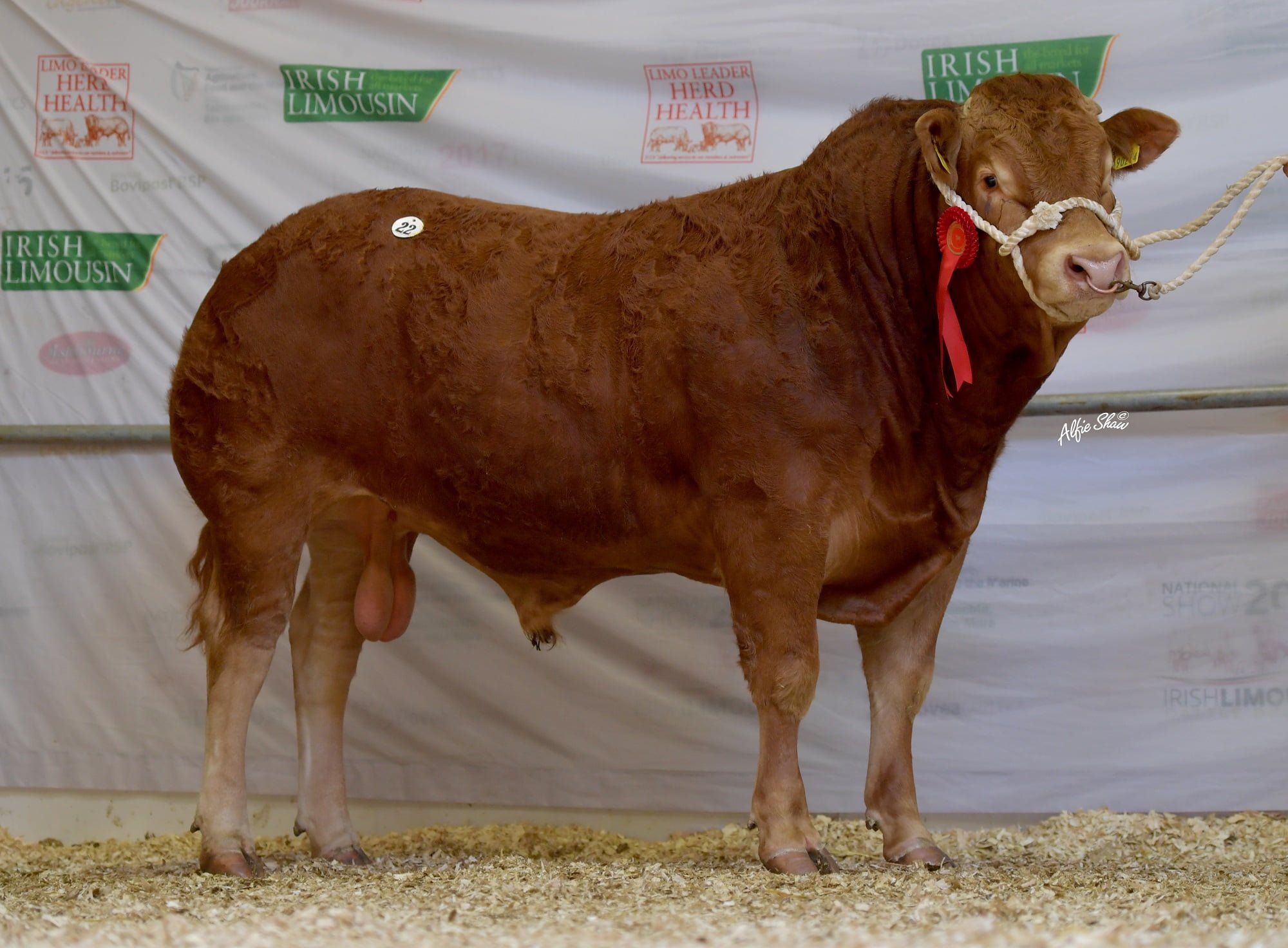 The Senior Champion Coraghy Monkeytricks Et, is a son of Ampertaine Foreman and the imported dam Dinmore Latena. Monkeytricks was bred by Thomas O’Harte, Clones, Co. Monaghan. He left the ring unsold having failed to reach his reserve.

A number of heifers were also offered for sale with the top price of €2,750 going to the Champion Female Esker-Hill Mia Et. Mia is a daughter of Trueman Jagger and the Wilodge Cerberus donor dam Newtown Harriet. Born in November 2017, Mia was Larry Crilly’s pick as Champion Female. Mia was bred by Padraig Brady, Ballinalee, Co. Longford. She was purchased by Christina Loughran for her herd based in Tyrone.

Lot 87. The Reserve Female Champion was also bred by Padraig Brady. Esker-Hill Mamamia Et is a maternal sister to the Champion but is sired by Ampertaine Elgin. Mamamia was purchased by Ann Dalton from Laois.


Lot 100. Brian Frawley of the Ballylin pedigree herd purchased second prize winner Royal County Naomi. This heifer – the youngest on offer – is a daughter of Plumtree Fantastic. She was bred by Thomas & Shane O’Loughlin, Dunboyne, Co. Meath. Her selling price was €2,400.

We would like to express our gratitude to Mr. Larry Crilly for very kindly judging the pre-sale show. Larry runs the Shanhill pedigree Limousin herd in Newry, Co. Down. After judging Larry commented:

I was honoured and delighted to be asked to judge this Premier show and sale. I was presented with absolutely super cattle in all classes particularly at the top end. I would like to thank the society for inviting me to judge here today and to wish all breeders and purchasers the very best.

The next society show and sale is in Roscommon on Saturday the 25th of May, six days later Granard mart in Co. Longford will host our last spring show and sale at 7pm on the 31st of May.

Every good wish to all purchasers of Limousin livestock.

Thank you to our auctioneers George and Denis, our stewards Michael Gunn, Michael Oliver and Tom Jackson.