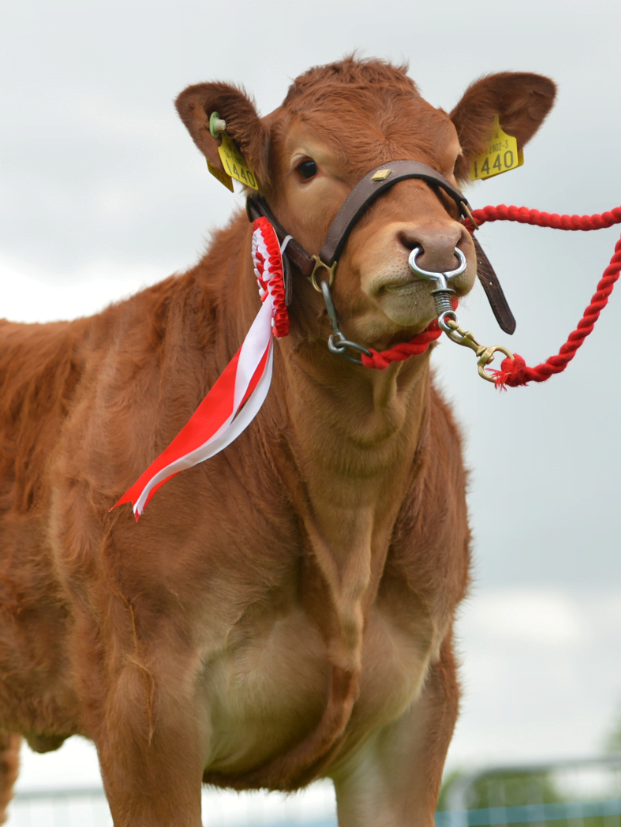 Two of the best known and revered herds in the country – Castleview and Roundhill – held their biennial heifer sale on Friday 14th September at Roscrea Mart. Forty nine deep pedigree females went under the hammer with almost all finding new homes. George Candler was auctioneer for the sale and bought his renowned auctioneering style to the podium at what was a lively sale with keen interest from a large audience. Both herds have amassed considerably successes in both the show and sales rings, both have also had a huge influence in the Irish herdbook. Many Noted AI sires were bred at Castleview and Roundhill, including Castleview Gringo, Castleview Casino and Castleview Gazelle along with Roundhill Saturn Et and Roundhill Dara,

History of the Sean O’Sullivan’s Castleview herd which is based in Castleisland, Co. Kerry:

The Castleview herd was founded in 1988 and over the years we have used the best bloodlines available to us through A.I. to produce top quality progeny.

To maintain a forty cow herd we sell a number of females biennially. This selection on sale offers a variety of interesting, established and sought-after blood lines with high index.

Some successful AI sires have originated in the herd;

Herd health is a priority at Castleview, the herd is a member of the SAC health scheme since 2004 and is:

We have a policy of only selling females at our biennial Genetic Advantage Sale. None of the heifers presented for sale have been flushed. Up to date scan results on all pregnant heifers will be available on sale day.

We would like to thank our customers at our past sales. We are pleased to hear that many of our cattle sold at previous sales have done well for their new owners both in breeding terms and in the show ring.

Three thousand euro was the selling price for Castleview Lily, a September 2016 born heifer. Lily has Wilodge Tonka, Nenuphar and Na Claudus in her lineage. Born in September 2016

At the same price was Castleview M 877. This 15 month old heifer is a daughter of Cameos (LM2191) and the Wilodge Cerberus dam Castleview Helen.

Four heifers from the Castleview herd attained a selling price of €2,600.

Castleview Linus sold for €2,300. Linus is a daughter of Ampertaine Gigolo (S1633) and Castleview Fawn. She was born in December 2016

Selling at €2,200 was Castleview Matura, a daughter of Ampertaine Commander (APM) and Castleview Jill.

At €2,100 was the Dieunordic (S2102) daughter Castleview Lavinia. Her dam Castleview Ebony Et has Fieldson Alfy and Ferry in her back pedigree.

Castleview Liberty also sold for €1,900. Liberty has On-Dit (ONI), Fieldson Alfy and Imperial in her lineage.

An outline of the Roundhill Herd of Tim, Doreen & Katie Corridan and is based in Fedamore, Co. Limerick:

Welcome to our seventh Genetic Advantage Sale. We are very pleased to offer you a great group of females. The heifers presented for sale are from our proven cow families and top high reliability sires. We would like to thank our customers at our past sales. We are pleased to hear that many of our cattle sold at previous sales have done well for their new owners both in breeding terms and in the show ring.

Years of intense focus on influential cow families and strict culling has ensured that Roundhill is one of the most uniform, performance-driven and maternally powerful cow herds. The herd was much admired at the 2016 International Limousin Conference as one of the host herds. Milk, fertility, soundness, udder quality, docility and breed character continue to be priorities for our females. At Roundhill the herd is predominantly bred by A.I. An extensive embryo transfer programme is undertaken annually to ensure rapid genetic progress. The main emphasis has been on use of proven French genetics with the aim of balancing terminal and maternal traits. However, we also enjoy showing and always look forward each year to the summer shows.

Our policy at Roundhill is to produce cattle with high genetic merit and a high health status. Roundhill is a member of SAC’s Premium Cattle Health Scheme (PCHS) and is accredited free of Johnes level 1 since 2009. The herd has achieved ‘BVD Negative Health Status BHS’ with the Irish national BVD eradication programme. As part of our continuous commitment to maintaining the highest possible health status, a stringent herd health programme is operated and prioritised. Cattle are vaccinated annually for Leptospirosis, IBR marker vaccine, Salmonella and for Clostridial disease in the young stock.

We take a scientific approach to our Limousin breeding – since its establishment the entire herd has been performance recorded, cattle at Roundhill are linear scored and weight recorded annually. All calving difficulties are recorded, and all calves are weighed at birth. Roundhill have the largest number of birth weights in the breed database and is a member of the ICBF- Whole Herd Performance Recording WHPR and Gene Ireland Maternal programmes. The entire herd is genomically tested and parentage verified. Consequently, there are many high-performance high-index heifers available for sale. Many of them rank in the top 10% of the Limousin breed on Replacement Index and Terminal Index with high reliabilities.

We have a policy of only selling females at our biennial Genetic Advantage Sale. None of the heifers presented for sale have been flushed. All are genotyped with parentage verified. We would be happy to welcome you at our farm before the sale to inspect the cattle and their families.

Topping the sale for the Roundhill herd was Roundhill Ljoyeuse 1669, she sold for €3,500. Ljoyeuse is a February 2016 born daughter of Casimir 65 (LM2065) and Roundhill Gjoyeuse 1289. Ljoyeuse is due to calf to Grenache in October.

Roundhill Lgiroflee 1687, a daughter of Ireland’s most popular Limousin AI sire Castleview Gazelle (ZAG) and the multi-award winning Mas Du Clo dam Roundhill Egiroflee 1164 Et sold for €3,300 to a Tralee based buyer. Lgiroflee 1687 is due to calve in mid-October to Grenache.

Roundhill Lunanime 1689, a daughter of Roundhill Hamlet and the 2014 Junior All Ireland Heifer Roundhill I Unamine 1440 sold for €3,300. Lunanime is due to calf in late November to Grenache.

Also selling at €3,300 was Roundhill Lbelladone 1705. This September 2016 born heifer is a daughter of On-Dit (ONI) and the Lino dam Roundhill Ebelladone 1156 Et. Her grand-dam Vanya Et won numerous championships in an illustrious show career. Lbelladone is due to calf in January 2019.

The Bavardage (AGB) daughter Roundhill M Romance 1820 sold for €3,300. M Romance was born in November 2017. Her dam Roundhill G Romance 1338 Et is a daughter of Attirant and the imported Ludo dam Romance.

The in calf Elite Jason Et daughter Roundhill Lbelladone 1683 sold for €3,200. Lbelladone 1683’s dam has Vivaldi and Gigusse in her sire stack. This April 2016 born heifer is due to calf in mid-October.

Selling for €3,000 was Roundhill Lunanime 1688. This heifer was born in July 2016 and is in calf to Castleview Gallant due to calve in late December. He sire stack includes Roundhill Saturn Et, Ramses, Obus and Juste. Her dam Unanime was imported from France and has breed incredibly well in the Roundhill herd.

At €2,600 was Roundhill Mangel 1751 a February 2017 born daughter of Roundhill James Bond Et and Netherhall Galaxy (also the dam of the Junior Champion at the National show in 2017).

Attaining the same price of €2,600 was Roundhill Mgiroflee 1774. This September 2017 born heifer has Ampertaine Commander (APM), Attirant and Lino in her lineage.

Selling at €2,300 was Roundhill Lbelladone 1655 an in calf daughter of Achile and Roundhill G Belladone 1316. Lbelladone is in calf to Grenache and is due to calve in early December.

The Vivaldi daughter Roundhill Knescoteb 1649 sold for €2,200. Knescoteb is due to calve in February to Castleview Lawerencer. Her dam Valentino has Lino and Joule in her sire stack.

Roundhill Langel 1798 Et, an in calf heifer sold for €2,000. Langel 1698 is a daughter of Netherhall Jackpot and Netherhall Galaxy. This heifer is the full sister of the 2017 National Show Junior Champion. She is due to calve in November.

Selling for €1,900 was Roundhill Langel 1695 Et. This heifer is a daughter of Netherhall Jackpot and Netherhall Galaxy. She sold in calf to Grenache and due to calve down in February.

The Corridan and O’Sullivan families would like to wish all purchasers of Castleview and Roundhill livestock the very best of luck with their purchases.