A team of four eager young breeders took to the skies on Friday evening the 4th August, heading from Dublin Airport for Dumfries show to partake in the Anglo Irish YMA finals. The Irish team comprised of Orla Curtin from the South West, Niall Jones from the South East, John Smyth and James Russell both from the North East.

Bright and early on Saturday morning – team Ireland presented themselves at Dumfries show and set about their mission. Simultaneously the Scottish Limousin Grandprix was taking place at the show, a tremendous line-of some of the best Limousin cattle were on show.

Three judges were in place to put the four representative teams through their paces. Bruce Goldie of the Goldies Herd, Dumfries and Galloway, Scotland, Jonathan Watson of the Tweeddale Herd, Northumberland, England and Tom Hickey of the Brookland Herd, Co. Tipperary. Bruce, Jonathan and Tom have a wealth of experience in breeding and showing cattle and performed their task in Dumfries with the utmost skill. 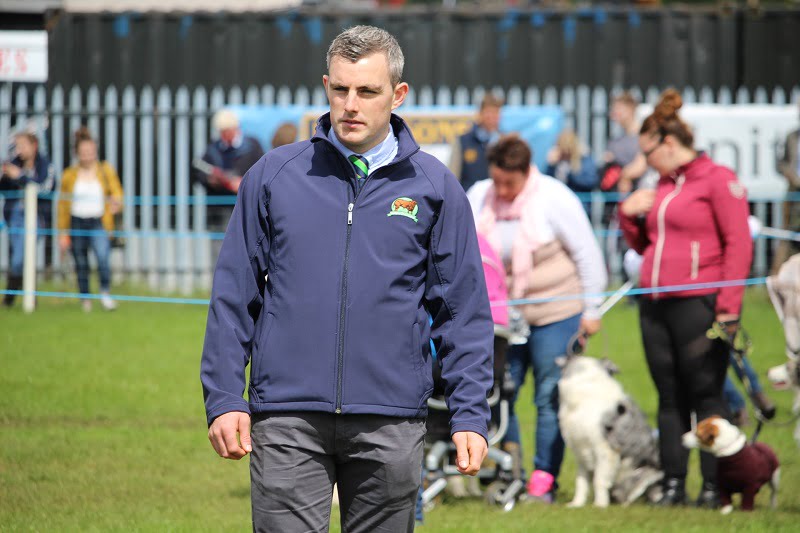 Tom has previously won the senior section of this prestigious competition twice. Prior to the competition he shared some of his knowledge with the team as well as some differences to be aware of from the perspective of UK judges. Both Tom’s knowledge and approach helped to put the YMA members at ease and relieve any nerves.

Each contestant was scored on their handling ability before they undertook the judging segment – for which four bulls and four heifers were judged, with placing order of the heifers used in the “Reasons” segment.

The Irish Limousin Cattle Society would like to convey our gratitude to all involved in running this competition. Thanks to Stephanie Dick and Tomas Illingworth, both of whom worked tirelessly to ensure the smooth running of the competition. Stephanie and Tomas have both competed at the Anglo Irish in the past.

Also, in attendance at this prestigious competition was James Callion, the new Honorary President of the Young Limousin Breeders Club (YLBC). James travelled over from county Tyrone, where along with this Veterinary practice he and his wife Alison run the Melbreak pedigree herd.

Our thanks to the judges at this competition, Bruce, Jonathan and Tom, and to the Dumfries show committee. Orla, Niall, John and James would like to thank the Irish Limousin Cattle Society, thanks to Paul and the YMA co-ordinators that traveled to Dumfries – Ann Hester and Avril Gubbins, to the Regional YMA co-ordinators and to Michael Gunn and Clive Jennings – National co-ordinators. The team would also like to thank everyone involved in the National Finals which were held in Ardlea – especially Dan, Ed and Kevin.

Thanks to Clippers Ireland for the lovely jackets, which were personalised for each competitor – they are a lovely keepsake of the event.

Andrew Ewing, who lives close to Lockerbie which is 20 minutes from Dumfries, invited the group to visit his farm, and his Fairywater pedigree Limousin herd. The Ewing family have a keen interest in Livestock and the Irish delegation thoroughly enjoyed walking through this exceptional holding.

On Sunday the group visited Hill Top Farm, North Yorkshire the home of James Cooper and the Tomschoice herd. James took the group on a tour of his magnificent farm. Kaprico Eravelle was a stock sire to the herd, a number of his sons are standing in Irish AI.

We would like to thank Andrew and James for their hospitality.

The ethos of the YMA is to nourish culture and enhance the interest in the Limousin breed of our future breeders and to ensure that they enjoy their involvement. The trip to Dumfries ticked all the boxes and more. Our young team (for three members of the team it was their first time competing in the Anglo Irish) thoroughly enjoyed their weekend and came home wiser in the knowledge of the breed. Our team did the Society proud.