Few Irish bred Limousin bulls have had as big an impact in the breed in the UK as the aptly named Powerful Irish, with sons selling to 13,000gns on a number of occasions and daughters reaching 25,000gns.

Bred by Philip Crowe and family, Irish was imported to the UK by Martin Irvine and family for their Anside herd, Aberdeenshire. Bought unseen, Martin explains that he had seen photos of Irish at five months old and 11 months old as well as a photo of his dam, Clonlara Vixen, herself a daughter of the former record priced Grahams Samson who sold for 55,000gns in 2003. 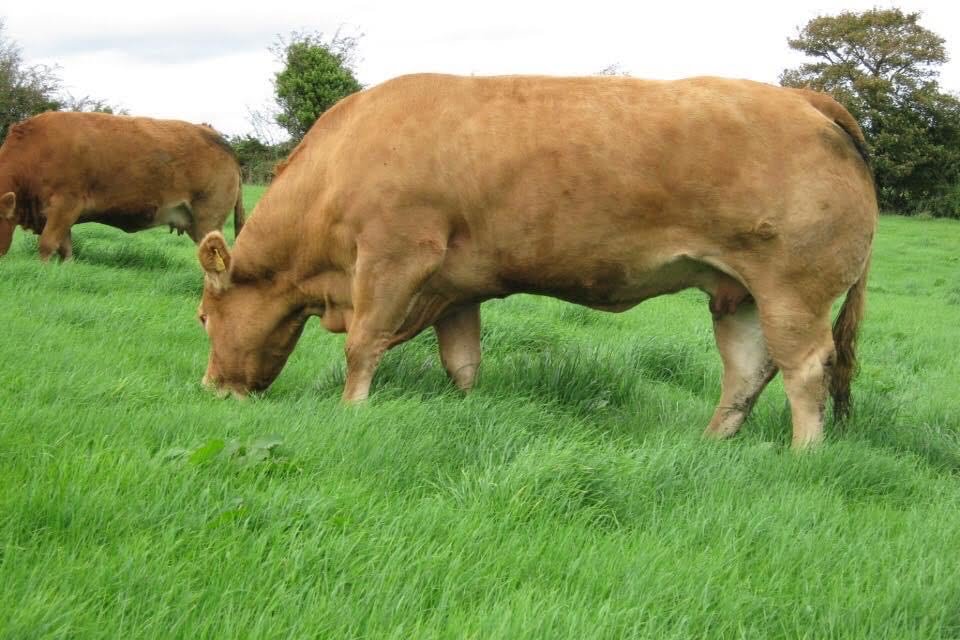 “I remember Samson as a bull who didn’t really breed many outstanding bulls, but his daughters made great cows and that was a deciding factor in the decision to buy Powerful Irish.

“The dam line is important in any bull we buy as it is his daughters which will be the future of the herd. The sons will generally be sold for breeding, but the daughters are in the herd for many, many years, so ensuring we have a good female base behind a new bull is critical,” says Martin who farms with his wife, Mel, and parents, Stephen and Denise.

Powerful Irish photographed at home in Cavan as a weanling

Having seen the photographs Martin took what he calls a small gamble and bought the bull without seeing him in the flesh.

“We were looking for a bull loaded with muscle and shape and Irish fitted that bill, it was a gamble to buy him unseen, but it was one I felt was worth it.

“When he landed home from Ireland you could see he’d spent more time travelling than was ideal and took a few days to adjust and pull himself back together, but once he did I was more than pleased we’d bought him.”

Running 70 pedigree Limousin cows alongside 500 commercial ewes and a small flock of pedigree Blue Texels on 240 acres, the Irvine family aim to produce about 15-20 bulls a year for sale, targeting Stirling bull sales as their main outlet.

“We have sold at Carlisle in the past, but in the last few years have focused firmly on Stirling where we have a good following for our bulls and can generally be sure they’ll make what we feel they’re worth. There is always the chance a bull could make more elsewhere, but we find we get a more consistent trade at Stirling with repeat customers willing to pay well for the bulls they want.

“Tellingly the first 25 sons of Powerful Irish sold to average 7000gns and the top price we’ve made of his sons is 13,000gns for Anside Mexican at Carlisle, with Anside Magneto making 12,000gns at Stirling. The vast majority of his sons have sold for between 6000gns and 9000gns. A strong selling average is a key indicator of success for us,” he adds.

Arriving in Aberdeenshire as a yearling bull, Irish was, following an injury to the herd’s previous stock bull, put to work at 14 months old on the spring calving half of the herd.

“It wasn’t an ideal start for him, but needs must, and he handled it well, continuing to grow on and develop while also settling all the cows in calf.”

While it was his sons which made headlines in the early days, latterly it has been daughters and granddaughters which have made their mark in the sale ring, including Anside Omae which picked up the reserve championship at the Red Ladies Derby in 2019.

Then in January 2021 a daughter bred in the Wilodge herd, Wilodge Onhigh sold for 25,000gns, with granddaughters, Wilodge Opulent and Wilodge Poshgem both making 20,000gns.

“It has been great to see his daughters in demand and it backs up what we already know about them ourselves. Cows and heifers by Irish would now make up about two thirds of the herd and they are proving to be big, milky, easy fleshing females with huge pelvic area, making for easy calving.”

“His daughters would be among our best breeding females and they are really proving themselves in the herd ,” says Martin.

Noting that Irish carried the rare NT419 and the Q204 gene, Martin says this genetic trait clicked particularly well in the herd which largely carried the F49L gene.

“The combination of these genetics has proven to be exceptional and delivered growth, deep loins and super length in their progeny.”

Having lost Powerful Irish following a back injury the family retained his son, Anside Oden, for use in the herd and have recently sold this bull due to the high proportion of his sisters in the herd, with a Goldies Fortress son, Anside Orton, retained for use on Irish’s daughters, and now an Ionesco son, Anside Prometheus, retained to run alongside him.

“Powerful Irish was a great bull and has had a massive influence on both our herd and others who have used semen from him. His daughters will continue to have an impact on our herd and the breed here in the UK for many years to come. We couldn’t have found a better bull for our herd at the time,” concludes Martin.