Limousin proved to be very much in demand at the societies first Premier Show & Sale of 2019 which met with an 83% clearance and an average selling price of €3,966.

Judging took place on Sunday evening the 17th of March, with judging duties undertaken by Michael Cursiter – Chairman of the British Limousin Cattle Society. Michael runs the Lagas Limousin Herd at Evie on the island of Orkney. The Cursiter family also run a commercial cattle enterprise and a large flock of sheep on 1,700 acres of land. 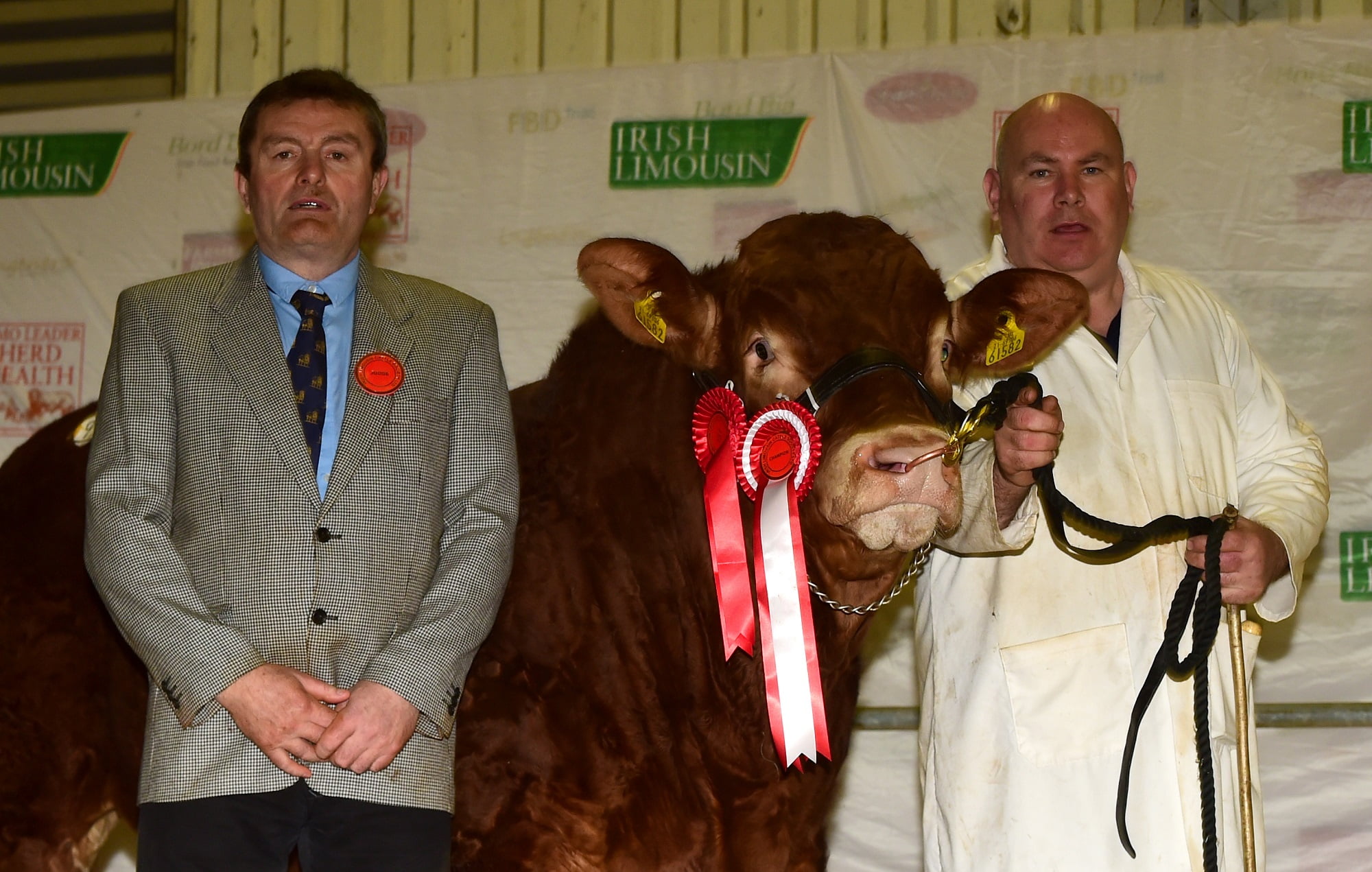 It was re-assuring considering the  uncertainty with Brexit and the current  difficulties within the beef market to see customers having the confidence to invest in the breed. Equally it was pleasing to see our breeders rewarded for the money that they have invested in the breed. The general feeling  was that the bulls we had on offer today were of a high standard and this was reflected in the prices paid. Livestock marts across the country are all reporting on the strong trade  for good quality Limousin cattle with many mart managers quoting that  demand is exceeding supply. We had many repeat customers which must be seen as a positive for the breed. While easy calving and maternal traits are still sought after there is a growing number of customers looking to purchase a good terminal sire to produce either quality weanlings, stores or a good grading animal at slaughter.

Lot 99. Sale day March 18th, 2019 will be remembered by the team at Ardlea Elite Limousin for a long time to come. They presented six outstanding young bulls which included the Senior and Junior Champions and the Reserve Senior Champion. The average take home price for the bulls was €6,300. Four of the six presented were sons of the remarkable show cow Whitehall Iris, these boys managed to sell for an outstanding average price of €7,475. Ardlea Elite Limousins, the largest pedigree Limousin herd in the country is based at Beechhill Farm, Mouthrath, Co. Laois, the herd is owned by Dan Tynan, and is managed by Kevin Bohan and his capable team of Keith, Paddy and Jason.

Taking the plaudits as Junior Champion was the outstanding 14 month old Ardlea Nemo. Born in January 2018, Nemo is a son of Killmactransa Karson and the aforementioned Whitehall Iris. Karson is a stock sire in the Ardlea Elite herd, he was purchased in Roscrea in 2016 from Jimmy McHugh, Dundalk, Co. Louth. Dam Whitehall Iris was bred by Noel Brennan, Gowran, Co. Kilkenny. She has Haltcliffe Dancer and Wilodge Vantastic in her back pedigree. At the National Show in 2018, Nemo took the red ribbon in his class, while Iris was crowned Senior Champion Female, Iris was shown with Nemo (then 7 months old and his twin brother Ardlea Niro), Elite Manilla a daughter of Iris’ also took first in her class.

Bidding started with a flurry once Nemo entered the sales ring, the hammer fell at €9,500 with the successful bidder being John Kingham, Farm Manager of Tateetra Farm, Dundalk, Co. Louth.

To see Ardlea Nemo in the sale ring – Click Here 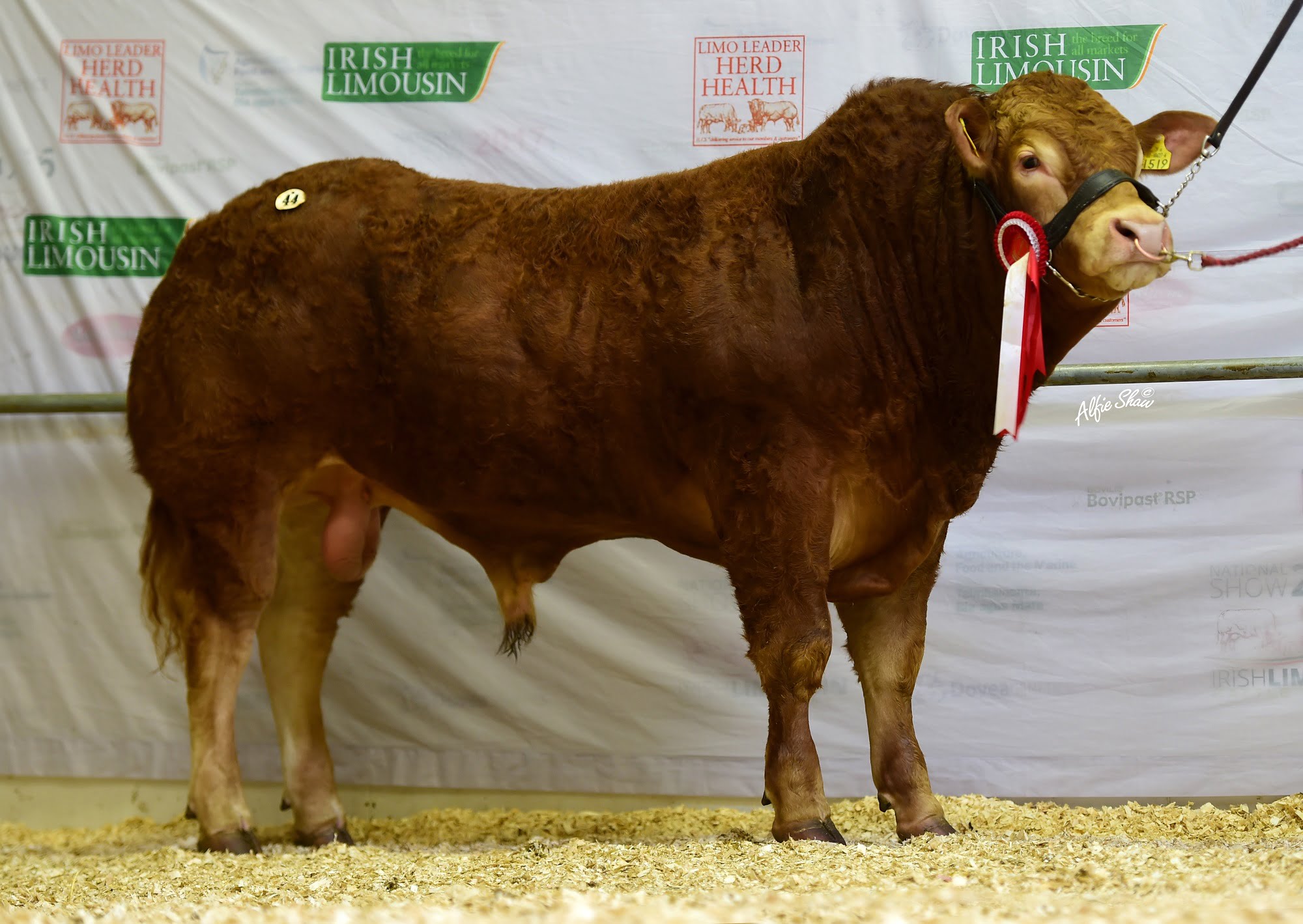 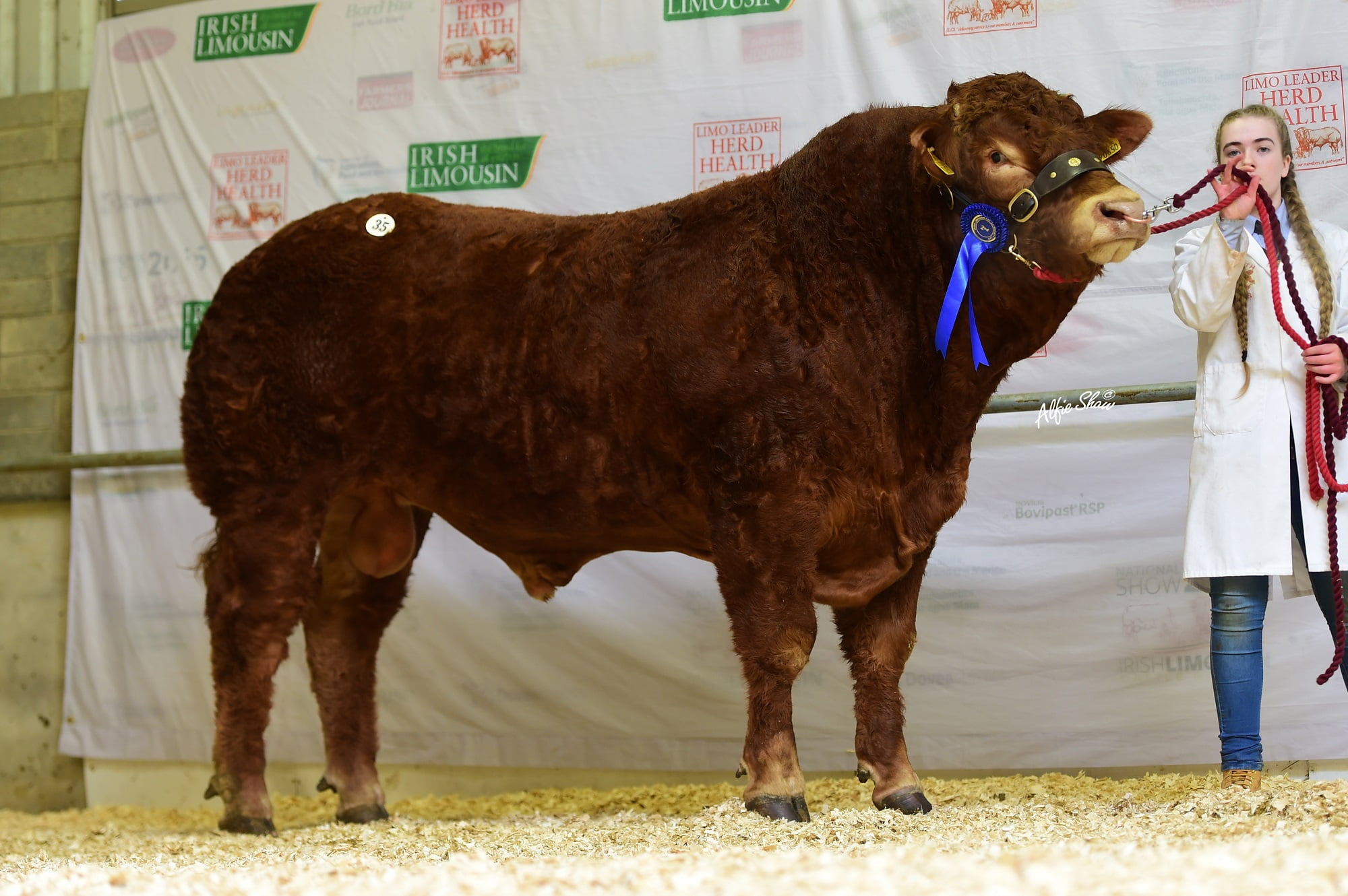 Lot 51. Carrickmore Mickeyfinn Et, a full brother of Carrickmore Maximus Et – the record priced Irish Limousin bull who sold in October at €38,000 sold for €7,100. Mickeyfinn was bred by John & Karol Connell, Oldcastle, Co. Meath. By Ampertaine Foreman and out of Baileys Iceprincess (overall Champion at the International Limousin Congress in 2016, and National show Champion in both 2015 and 2016). Mickey Finn was awarded second place in his class. He was purchased by Thomas Claffey, Ballingore, Co. Westmeath. 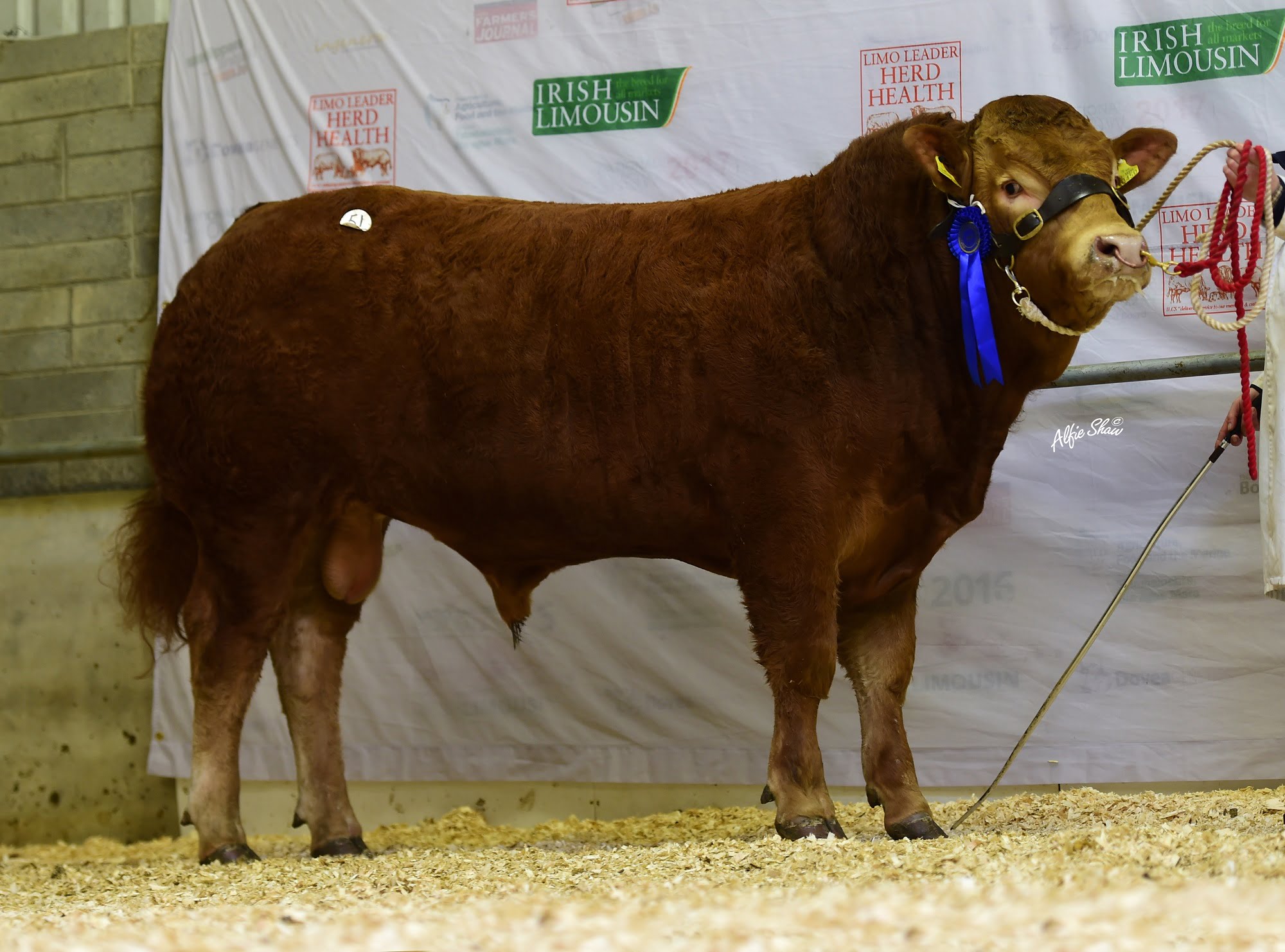 Lot 41. The Reserve Senior Champion Elite Messi Et was also bred by Dan Tynan, Mountrath. Messi is a full brother to the Senior Champion (Lodge Hamlet and the noted Whitehall Iris combination). Born in September 2017, this powerful young bull has predominately five star ratings. With his impressive pedigree he was snapped up by William Sheenan, Ayrshire, Scotland for €6,200. 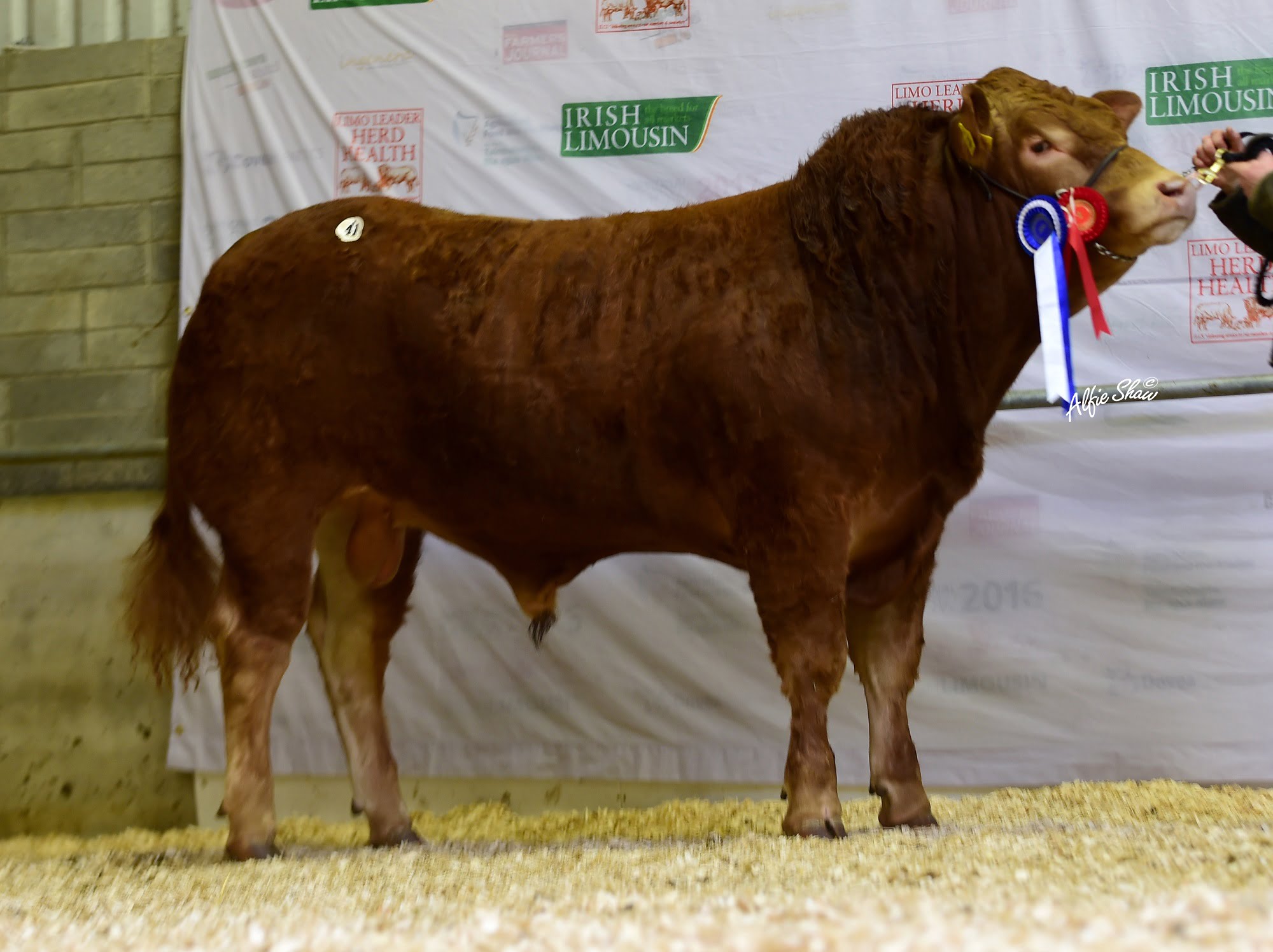 Lot 98. Second prize winner Lanmore Neptune, one of the youngest bulls on offer, commanded a price of €5,800. This eye-catching Gamin son was bred by Richard Duffy, Westport, Co. Mayo. Neptune’s dam Donnelly Gina has Haltcliffe Dancer and Lino in her sire stack. Having taken five first prizes on the summer show scene Neptune was purchased by a Cahir, Co. Tipperary based farmer.

Click here to see Lanmore Neptune in the sales ring 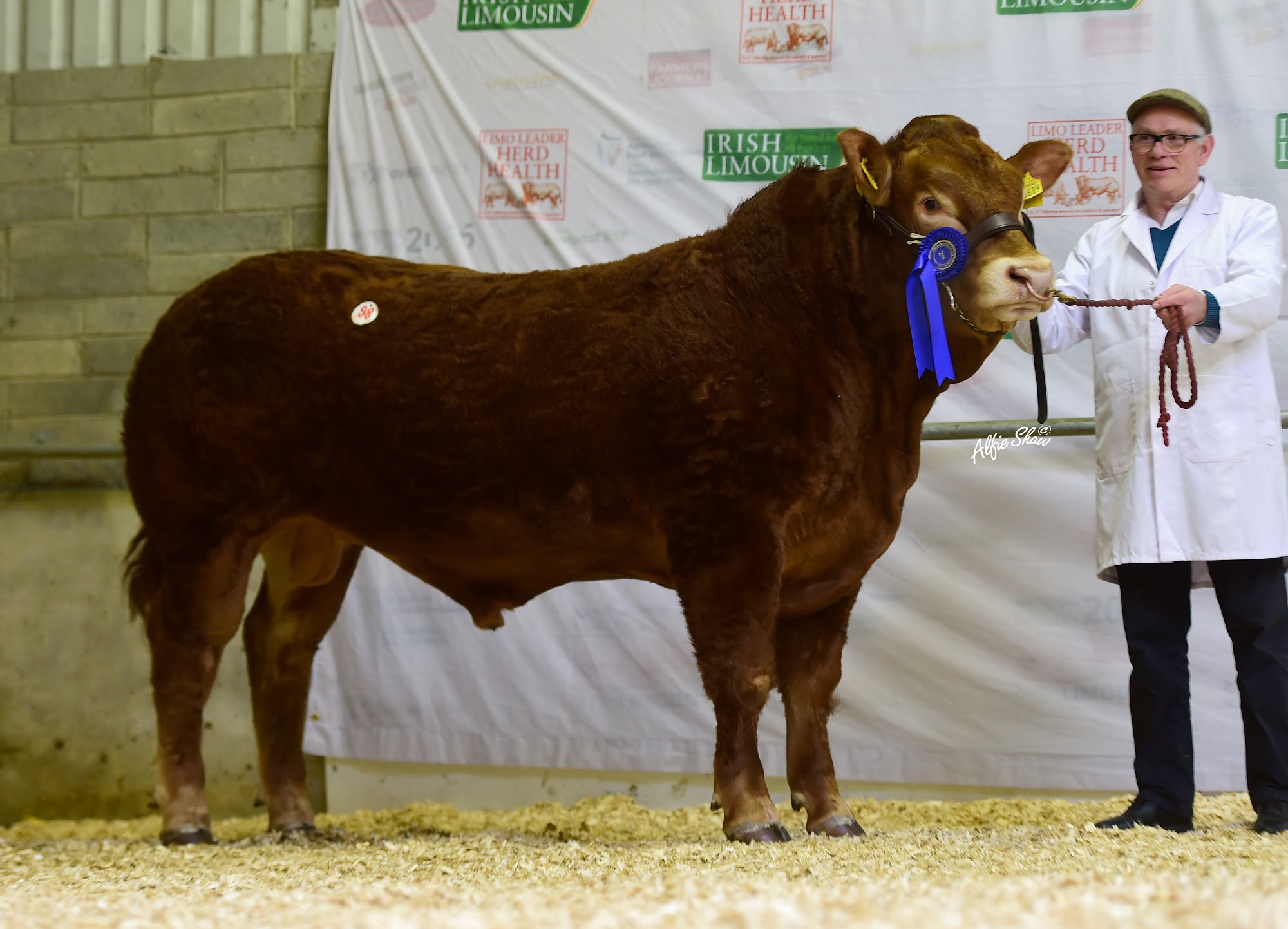 Lot 45. The final bull with the Lodge Hamlet X Whitehall Iris blood lines Elite Magic Et sold at €5,200. Magic was awarded fourth prize in the show ring. Born in September 2017, he has an array of five star ratings and a Muscle score of 152. Andrew Ewing, Dumfriesshire, Scotland acquired Magic from Dan Tynan. 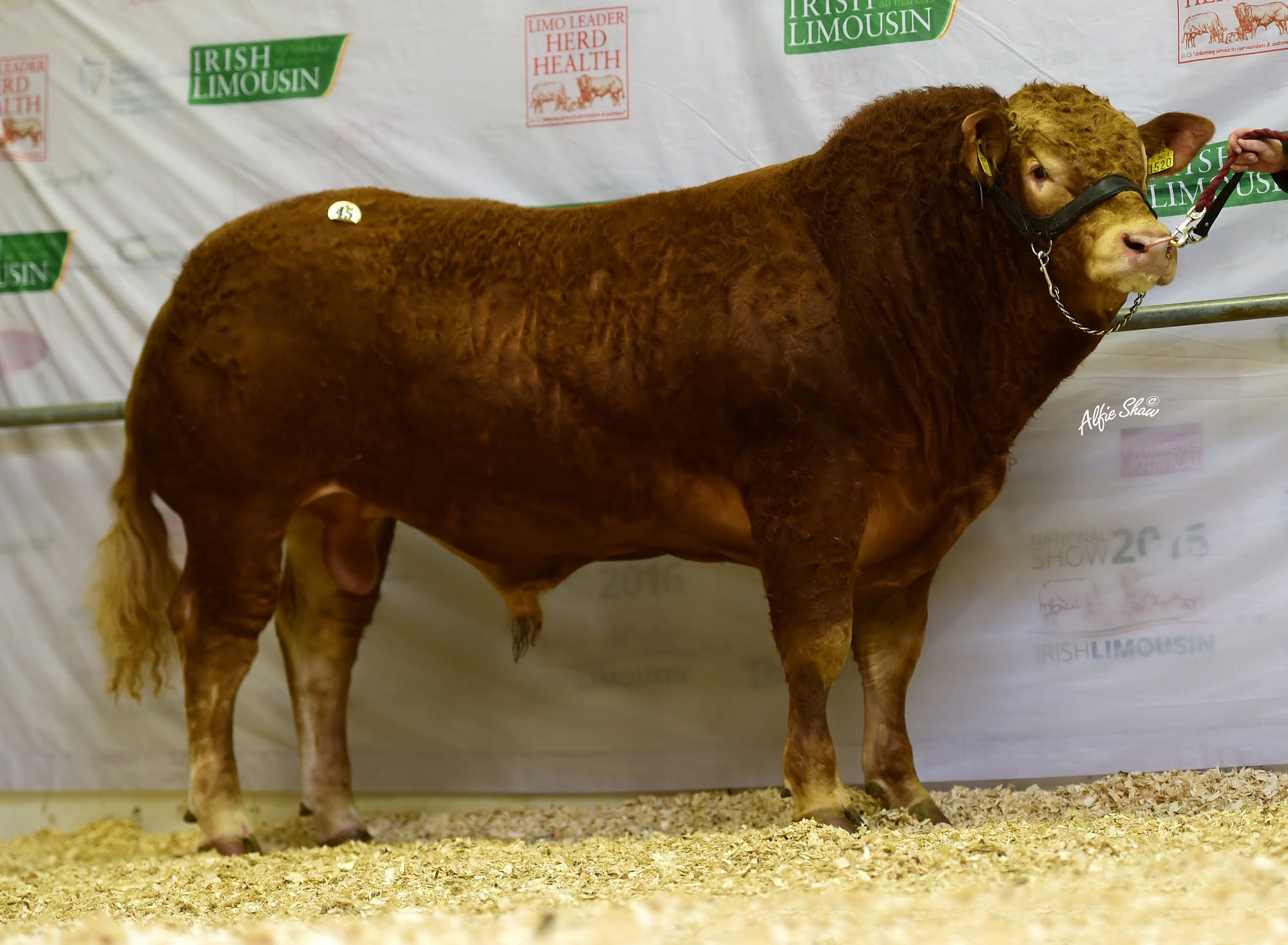 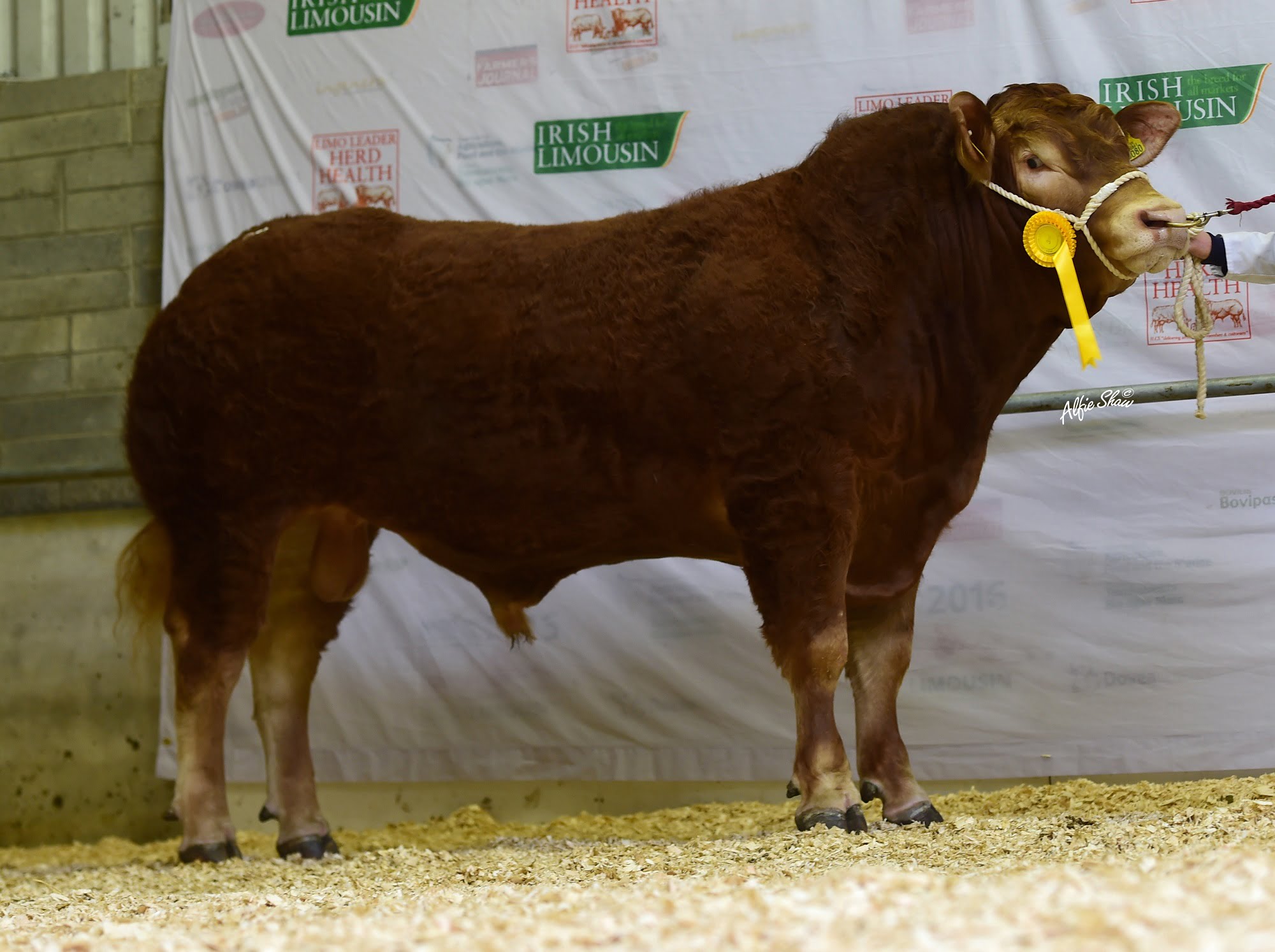 Lot 82. Killcastle Marvel Et, a first prize winning son of Ampertaine Elgin sold for €5,000. Marvel was bred by Alan & Paul Kelly of Moate, Co. Westmeath. His dam Killcastle Gina Monique 1 Et has bred multiple all-Ireland and premier sale Champions, she is a daughter of Wilodge Vantastic. Marvel was purchased by a Dromara, Co. Down farmer. 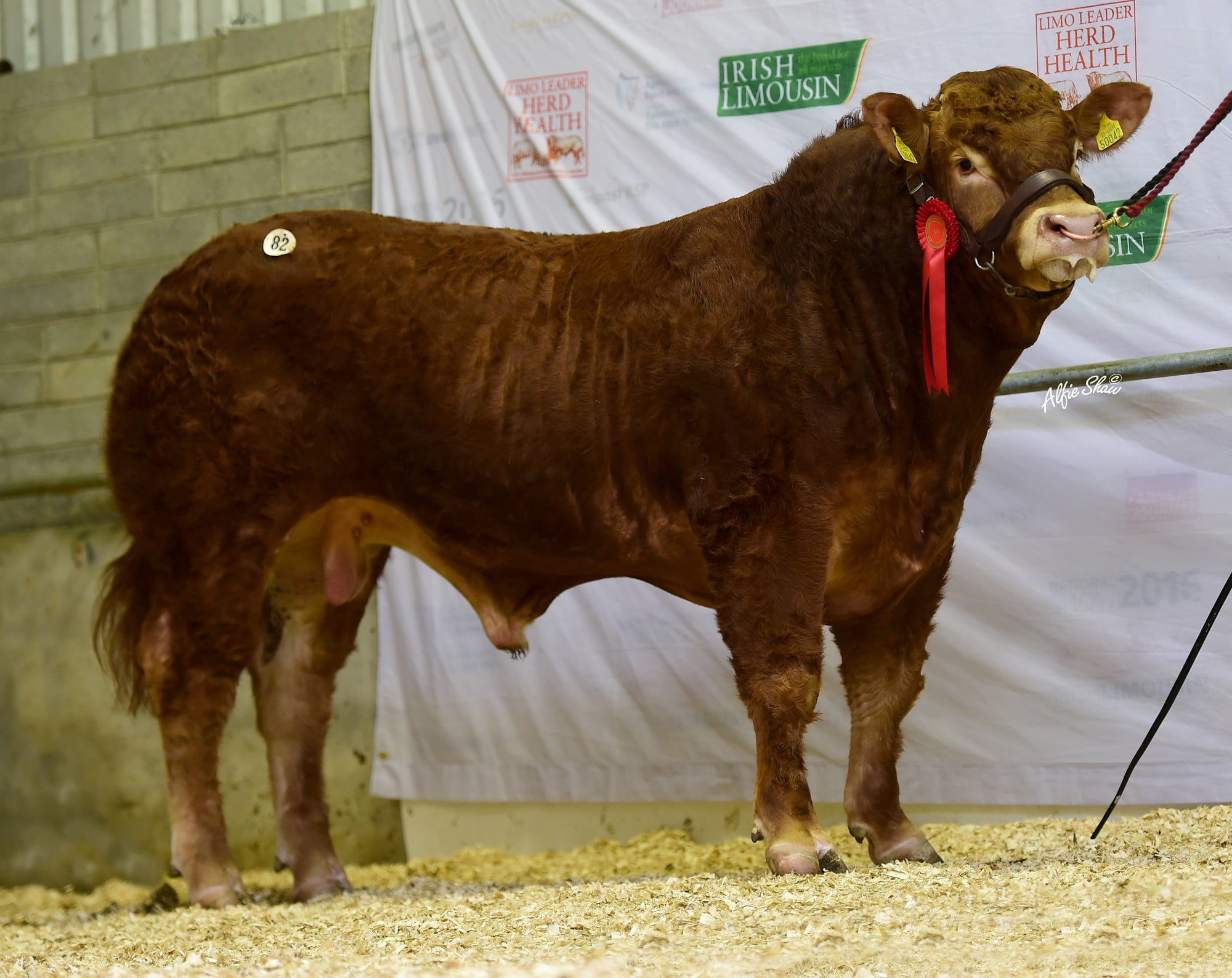 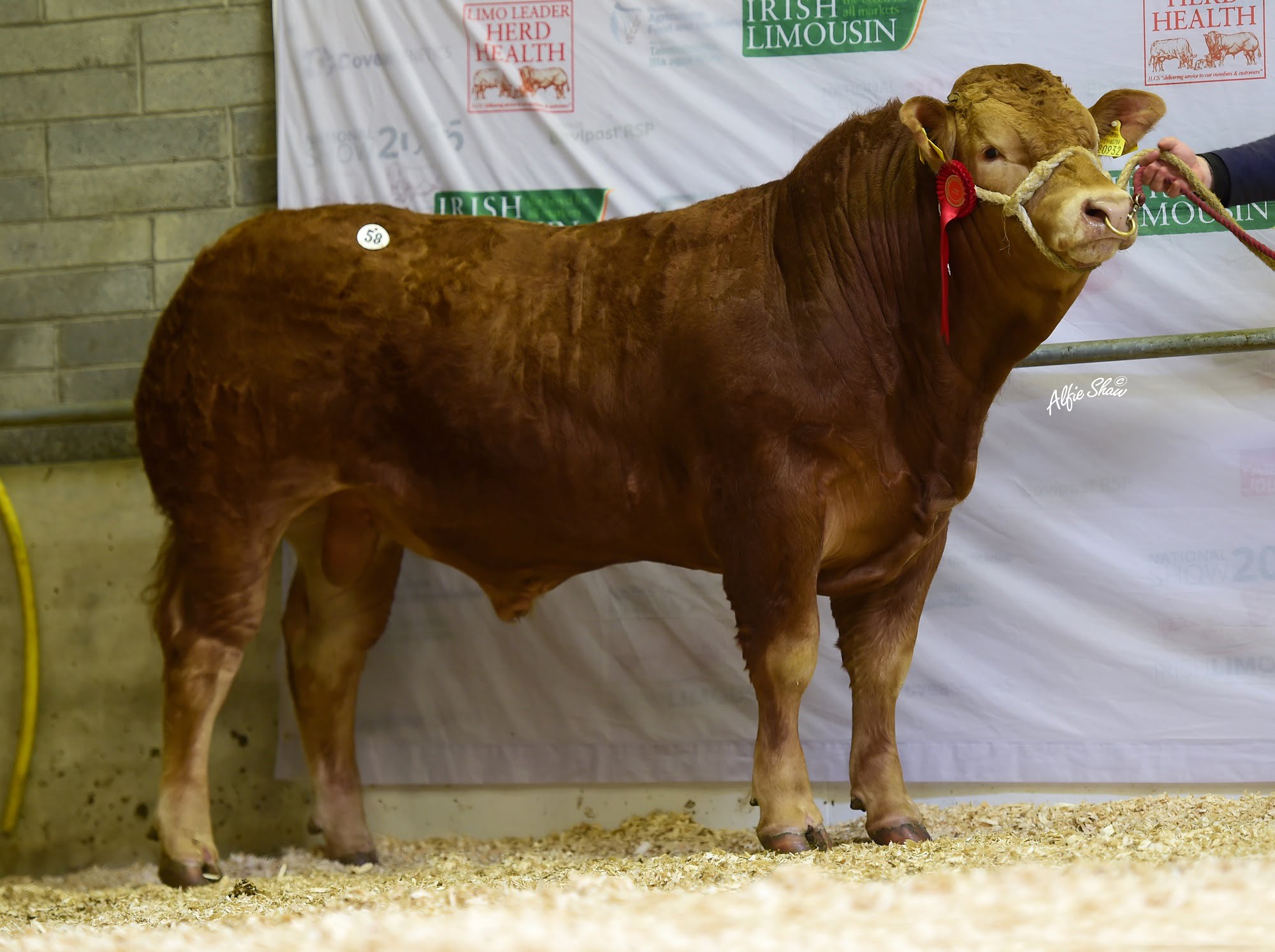 Lot 20. David and Joe Swaine from the Farmleigh herd (based in Enniscorthy, Co. Wexford) acquired a new stock bull Ernevalley Miley Et for €4,600. Miley was bred by Eddie Lynch, Loughduff, Co. Cavan. He has Sympa, Malibu and Ronick Luke in his pedigree. Third prize winning Miley has five star ratings in many traits. 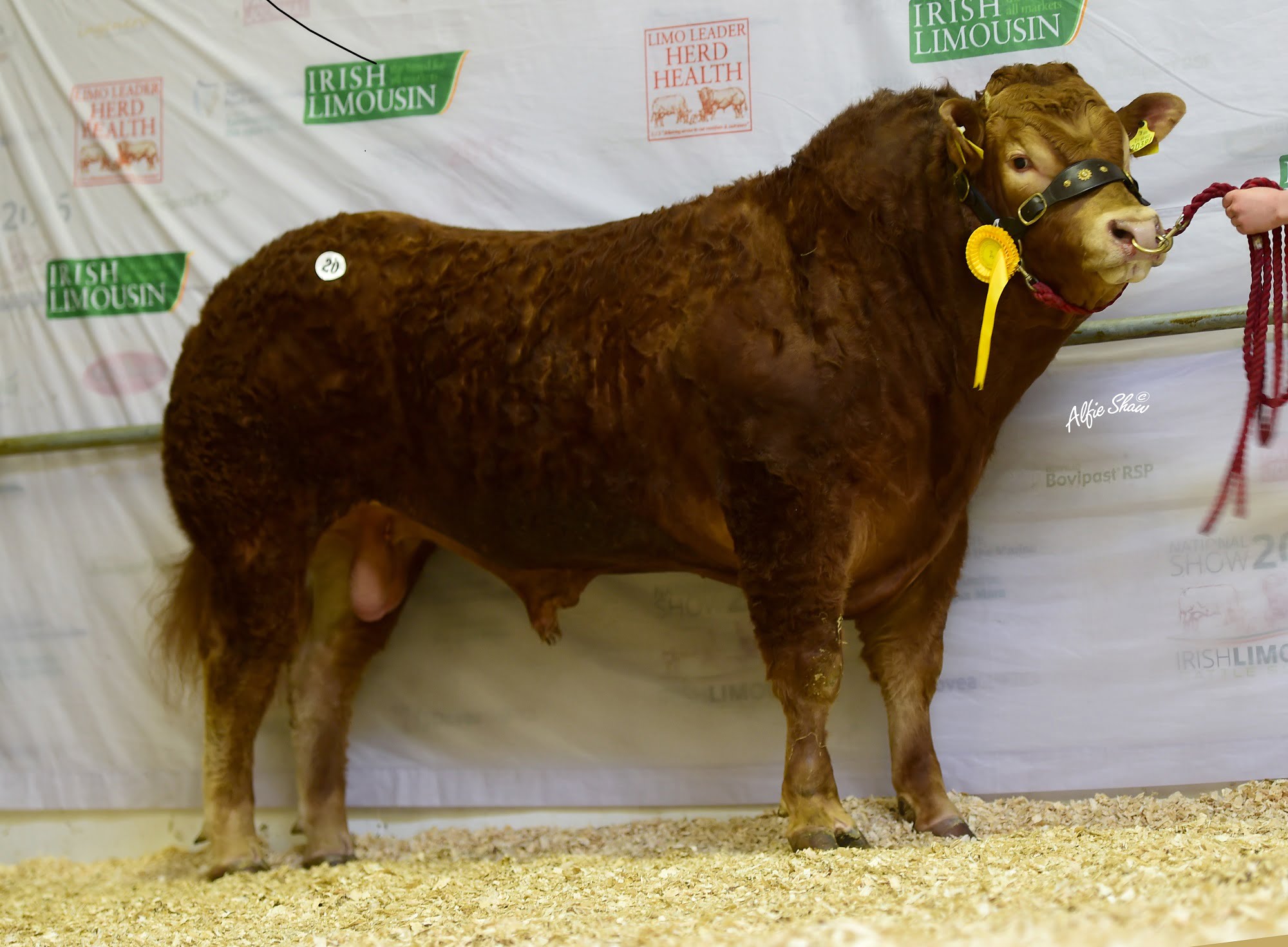 Lot 50. Also heading to Enniscorthy is Corcamore Maverick. Maverick is a son of Plumtree Fantastic and the homebred Goldies Terence dam Corcamore Fay. He has five star ratings in many traits. Maverick was bred by Brendan Curtin, Clarina, Co. Limerick. Joe Deacon purchased Maverick for €4,600. 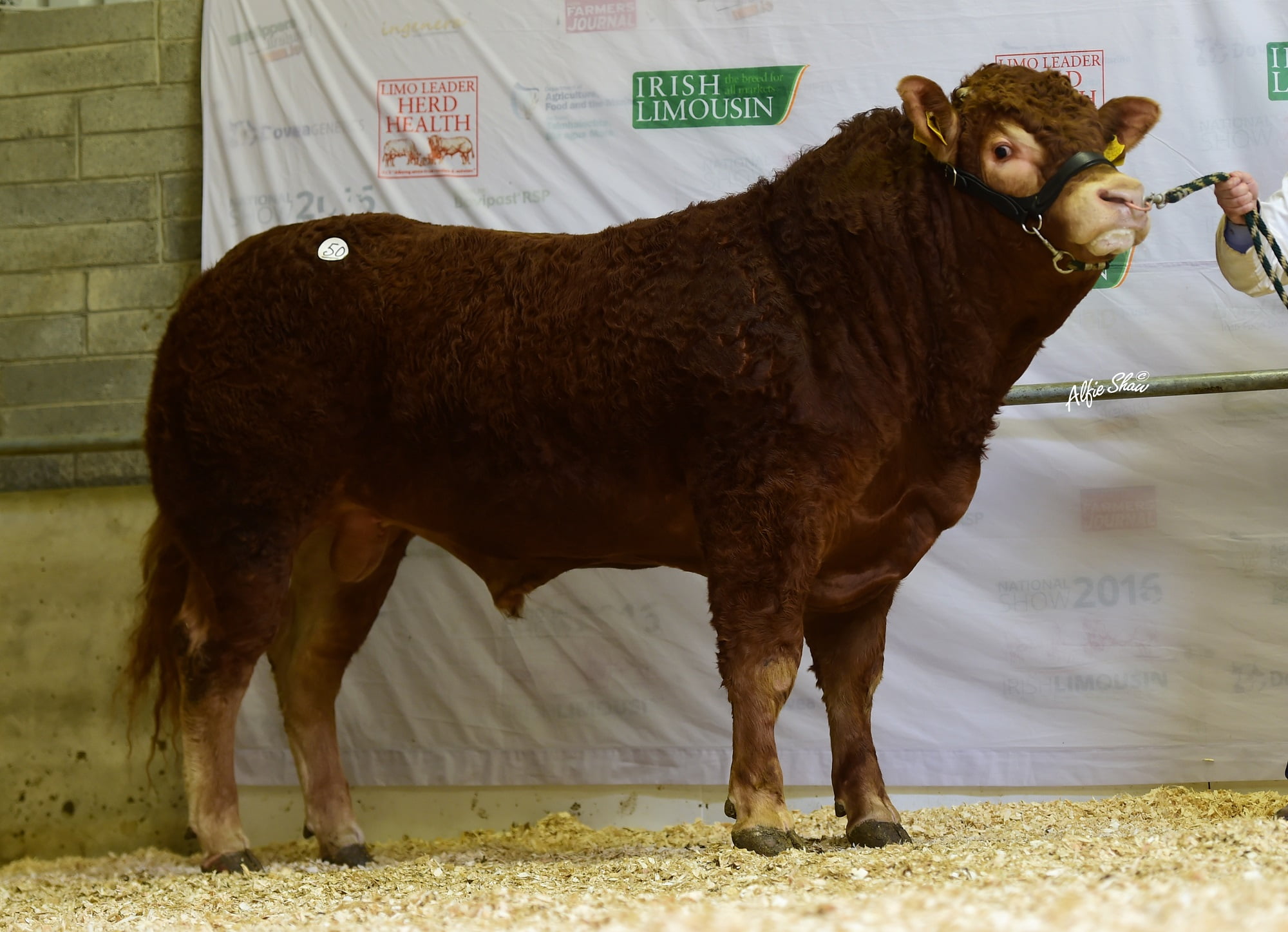 Lot 22. Keltic Merfyn, a son of Kaprico Eravelle and the Bavardage dam Keltic Icequeen sold for €4,500. Merfyn was bred by Teleri Thomas, Enfield, Co. Meath. With five star ratings in almost every trait, he was acquired by Ciaran Cassidy, Scotstown, Co. Monaghan. 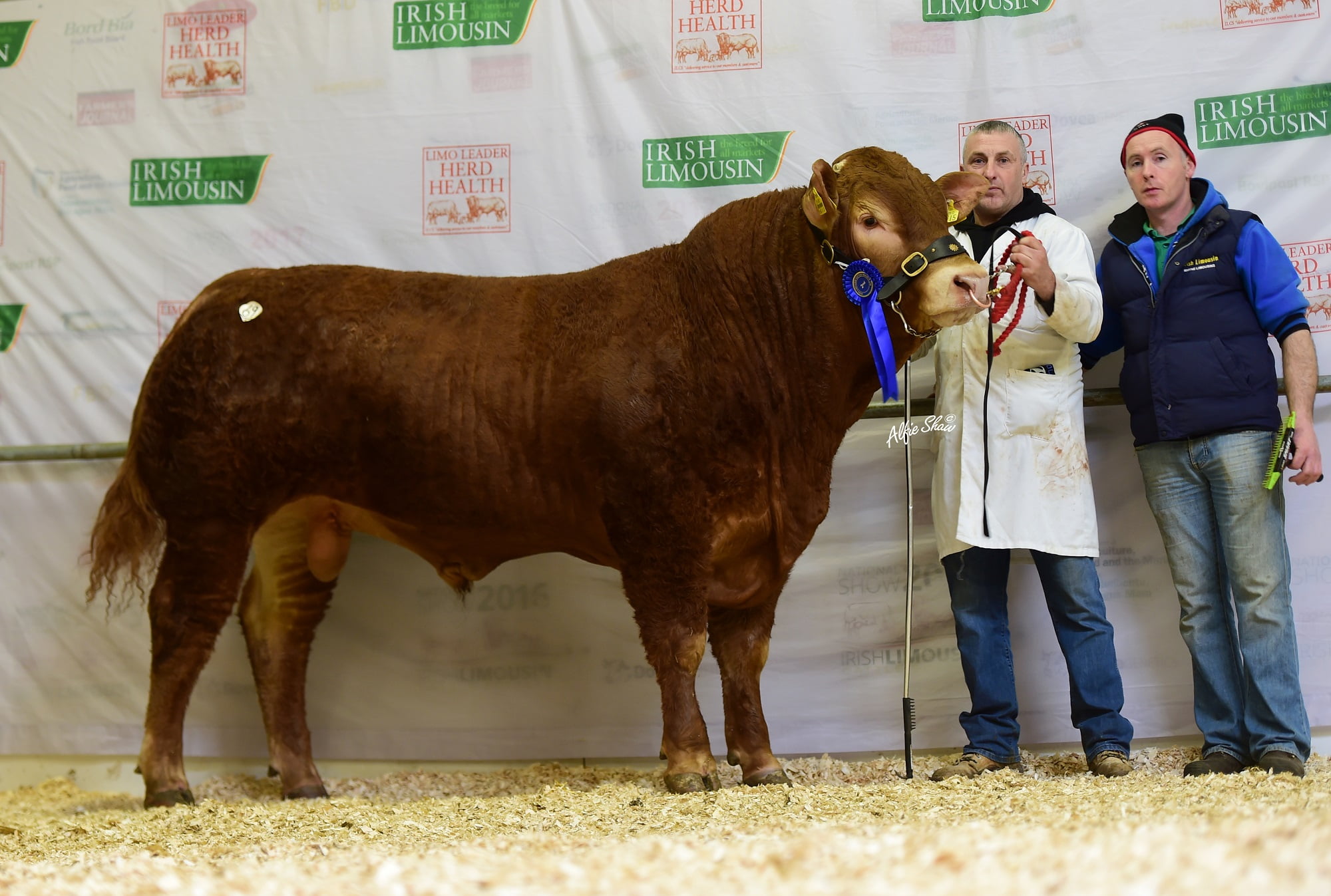 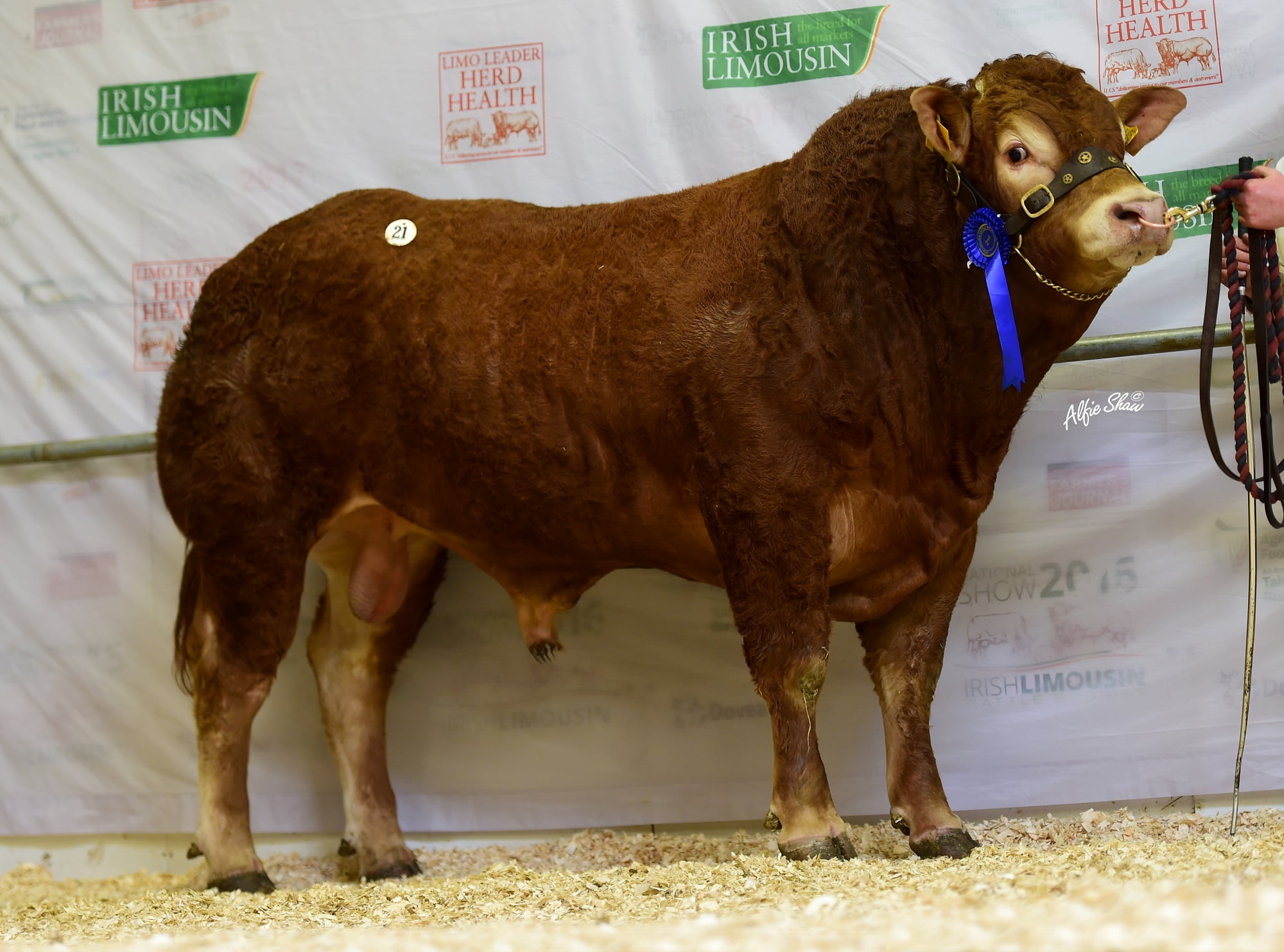 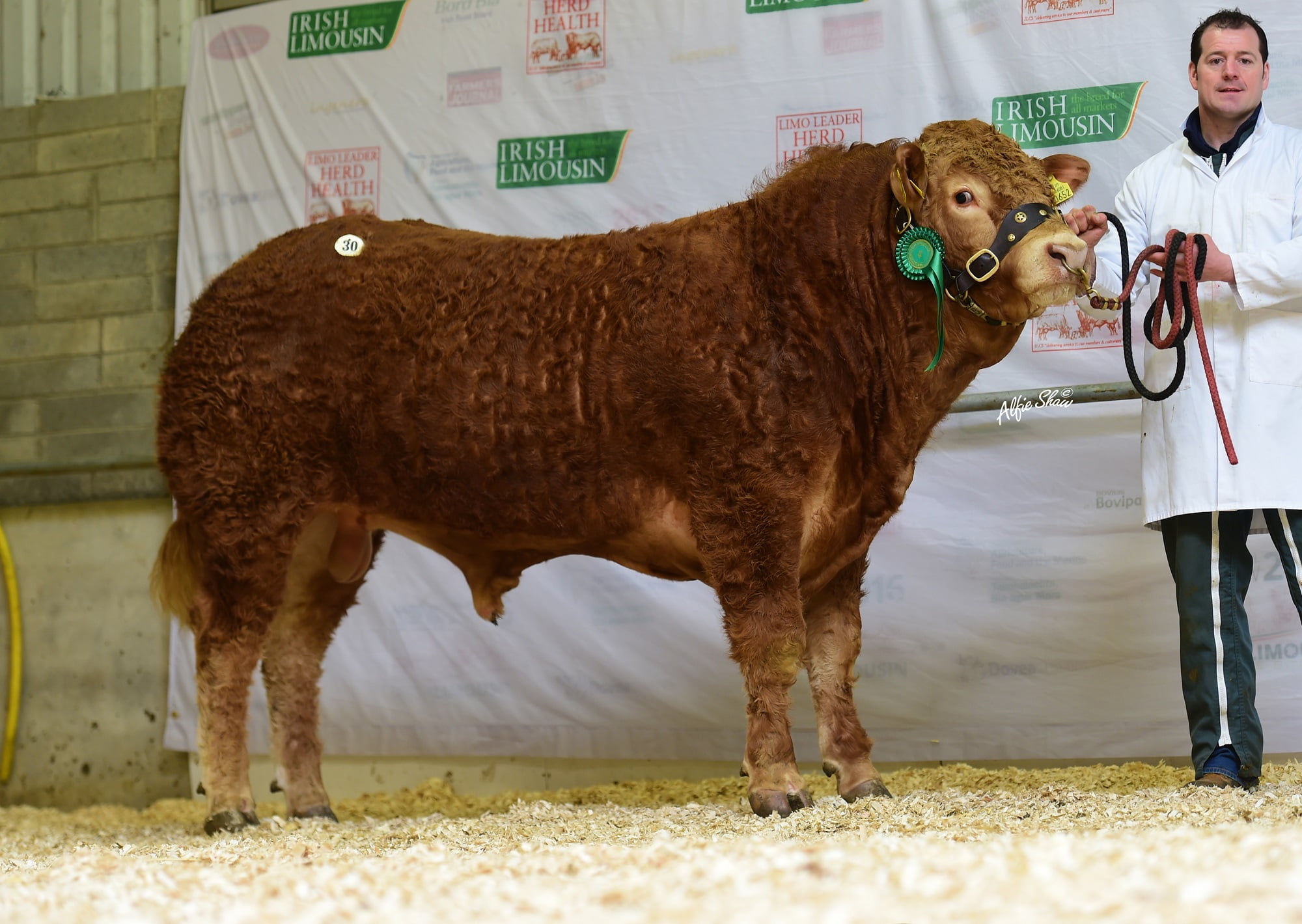 Lot 64. Finding a new home on the farm of Patrick Byrnes, Newtown, Co. Limerick is Brookland Mascot. Mascot is a son of Lodge Hamlet and Brookland Edel. His selling price was €4,000. Mascot was bred by John Hickey, Thurles, Co. Tipperary.

To view the catalogue for this sale please click here 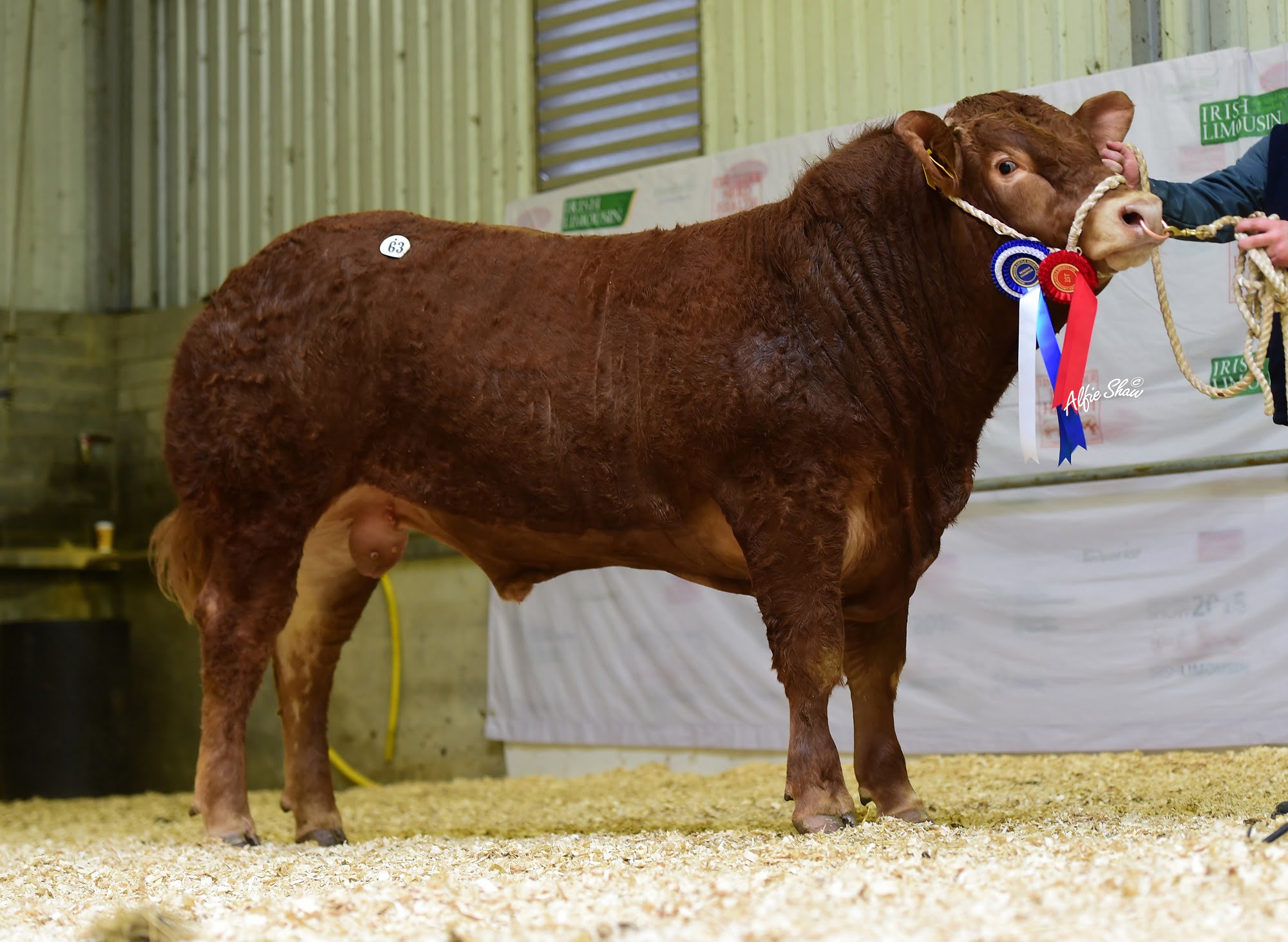 Many thanks to all purchaser’s at this and all Limousin sales – we wish you well with your new acquisitions.  Thanks to everyone that helped out here in Roscrea – the mart management and staff, our stewards – Michael, Frank and David, our auctioneers George and Denis, and our judge Michael.

Next sale is on this Saturday in Tullamore mart – show at 9am, sale at 1pm – Catalogue available by clicking here.