Excellent demand at May Premier sale

Our May Premier sale took place in Roscrea Mart on Bank Holiday Monday 3rd May.

There was a fantastic display of exceptional quality cattle on offer, a credit to the efforts and breeding programs of their breeders.

With strict Covid-19 restrictions in place, Health and Safety Officer Jim Dockery, together with the stewards and the mart staff coordinated a strict viewing schedule for potential customers. We are incredibly grateful to the exhibitors and customers for their understanding and for adhering to all guidelines.

Many thanks to mart manager Michael Harty, yard manager Noel and all the extensive and hard-working team at Roscrea mart, thanks also to our stewards Tom, William, Michael and Brendan and to Health and Safety Officer Jim.

Best wishes to all purchasers at our sale today. Auctioneer George Candler ran the sale extremely well over the Martbids platform, we were fortunate to have Shane from the Farmers Journal on hand to help to ease any glitches. George will be back in action in his home county for our next sale which will be held in Roscommon on the 22nd of May. The catalogue for this sale will be on our website in the coming days.

We are very appreciative to those that help spread the word of changes to protocols etc. in these every changing times. Colette and Marie ensured exhibitors were kept up to date as guidelines were being finalized in the runup to the sale.

Topping the bull sale was GRANGEFORD PAULO MALDINI ET from the herd of Gary Morrissey, Bennekerry, Co. Carlow. Paulo Maldini is a son of Wilodge Cerberus and the noted donor dam Procters Ena (Haltcliffe Vermount X Neutron). Born in October 2019, this eye-catching young bull has a muscle score of 133, which is in the top 5%. He also has five star ratings in Terminal index, Carcass weight, Carcass conformation and Daughter milk. With keen interest from the second he stepped into the ring, he was eventually acquired for €6,800 by returning customers the Garnedd herd of Messrs K.I. & E. & H.I. Jones, Betws-Y-Coed, Conwy, Wales.

Multi-starred CLONBONNY PLUMTREE, an outstanding son of Plumtree Fantastic was the choice of James Quirke, Ballinasloe, Co. Galway for €5,900. Plumtree’s dam Clonbonny Kerry has Gamin and Towthorpe Dubai in her sire stack. Plumtree boasts five star ratings in almost all traits including a Replacement index of €130 and a Terminal index of €162. He is predicted to be extremely easy calving. Sixteen month old Plumtree was bred by Tony and Darren Hartnett, Athlone, Co. Westmeath. Tony and Darren have had incredible success with Plumtree Fantastic offspring, for the last three years the herd has been awarded best progeny in the North West Limousin Club Herds Competition. 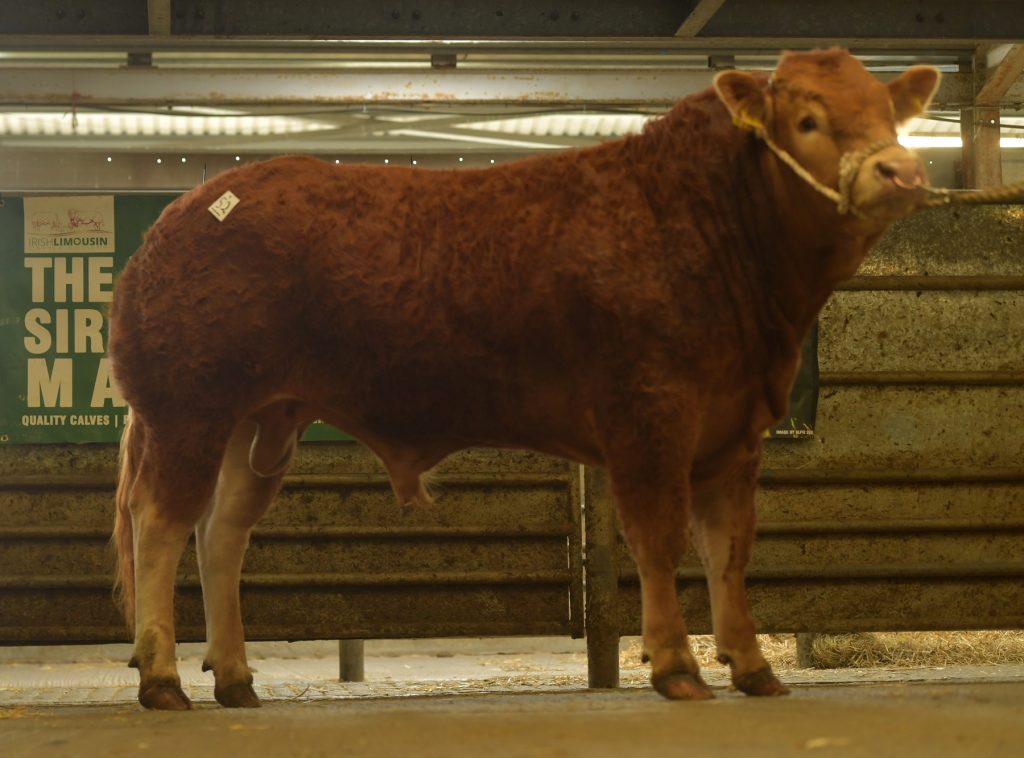 Also by Plumtree Fantastic is CASTLEFLEMING RED DIESEL, a 13-month old bred by Gerald Wall, Errill, Portlaoise, Co. Laois. Red Diesel’s dam Bova Juno has Towthorpe Dubai and Dahlia in her back pedigree. With five star ratings in Terminal index, Carcass weight and Carcass conformation, and carrying two copies of the F94L profit gene, Red Diesel at €4,600 was the pick of Tony Cleary for his Johnstown, Co. Kilkenny based herd.

Tony and Darren Hartnett returned to the ring with CLONBONNY ROCKY, another son of Plumtree Fantastic. Rocky’s dam Drumeel J-720 is a daughter of Marchermore Augustus and is one of the best maternal cows in the Clonbonny herd. Born in January 2020, Rocky has an array of five star ratings. After a flurry of bids Rocky was acquired by Marcus Neylon, Ennis, Co. Clare for €4,500.

At the same selling price was the Ewdenvale Ivor son CROHANE ROKY from Imelda Vaughan, Thurles, Co. Tipperary. Roky has a five star Replacement index of €174 and a five star Terminal index of €167. Roxy’s dam Crohane Mary is a daughter of Tomschoice Iceberg. He has an extremely low predicted calving difficulty of 2%. Roky was the pick of Eoin Ryan, Killarney, Co. Kerry.

Two bulls sold for €3,900 – first at this price was MAYBE PLANTATION from Michael Gunn, Elphin, Co. Roscommon. Plantation is a Scottish born son of Lowflan Lee, he was purchased as a calf along with his dam at the Maybe herd dispersal sale. With five star ratings in many traits and carrying one copy of F94L and one Q204X gene, Plantation was acquired by Michael Burke to run with his herd based in Dunmore, Co. Galway.

The sole Bavardage son on offer CORROY PINKMAN came from the yard of Declan Filan, Boyle, Co. Roscommon. Pinkman has an array of five star ratings, including a Replacement index value of €128. His grandam is the renowned show cow Carwin Hillery (shown very successfully by the team at Ardlea Elite). Maurice Regan, Clonmel, Co. Tipperary paid €3,500 for 17 month old Pinkman.

Setting the bench mark for the females on offer was the exceptional Sympa daughter CARTRONFREE PRICELESS ET. Born in October 2019, Priceless was bred by Martina Browne, Granard, Co Longford. Her dam is the remarkable donor cow Melbreak Fairylight, incidentally Fairylight is also the dam of Cartronfree Pearl Et and Cartronfree Peep Et, both also on offer at this Premier sale. Priceless oozes class and style and with her noted pedigree she was the pick of Ruairi McCloskey, Dungiven, Co. Derry as an addition to his Owenbeg pedigree herd.

From the same yard at €4,400 was CARTRONFREE PEARL ET, this lady is a maternal sister of the previous lot Priceless. Pearl’s sire is the renowned Ronick Hawk. With great presence and high star ratings, this eighteen month old heifer was snapped up by Patricia Kiernan, Maynooth.

The Grangeford Jojo Et daughter COPPERDOOR PANDORA was presented for sale by Michael Brady, Granard, Co. Longford. Pandora’s dam Copperdoor Kate has Arita-Ben and Ferry in her sire stack. Paul O’Hare of the pedigree Valleyfarm herd based in Newry, Co. Down paid €3,800 for Pandora.

Also acquired for an established pedigree herd was MEENROSS PROMISE. This November 2019 born heifer was bred by James O’Grady, Scariff, Co. Clare. Promise is a daughter of Lodge Hamlet and the Wilodge Cerberus dam Meenross Kalipo Et. She has one copy of the NT821 gene and one copy of the F94L gene. Promise was acquired by the Aughalion herd of Patrick Clerkin, Ballyjamesduff, Co. Cavan for €3,600.

CLONAGH PLUMTREE TED, a shapey daughter of in demand Plumtree Fantastic sold for €3,400. Plumtree Ted was bred by Garreth Behan, Portlaoise, Co. Laois. Her dam, Clonagh Klaudia, has Dinmore Goldcrest and Nenuphar in her back pedigree. Plumtree Ted was purchased by Eoin Smith, Kells, Co. Meath.

BRADDEN BRIDGE PETRA ET a daughter of Ampertaine Gigolo and Foxhillfarm Mary made €3,300. These genetics have proven to be highly successful in the past with Petra’s full brother selling to the UK, where in 2020 he stood as Senior Champion at the British Limousin Society sale in Carlisle. Petra was bred by highly regarded showman Gareth McGuinness, Co. Meath. She will remain in her birth county as she was purchased by Eoin Smith from Kells.

Francis Kavanagh paid €3,100 for BROOKFIELD PHOEBE. Bred by Alan Borton, Newbridge, Co.Kildare, Phoebe has Grangeford Jojo Et, Cloughhead Ernie and Oxygene in her sire stack. She sold scanned in-calf to Brooklands Marco and is due to calf down in late September.