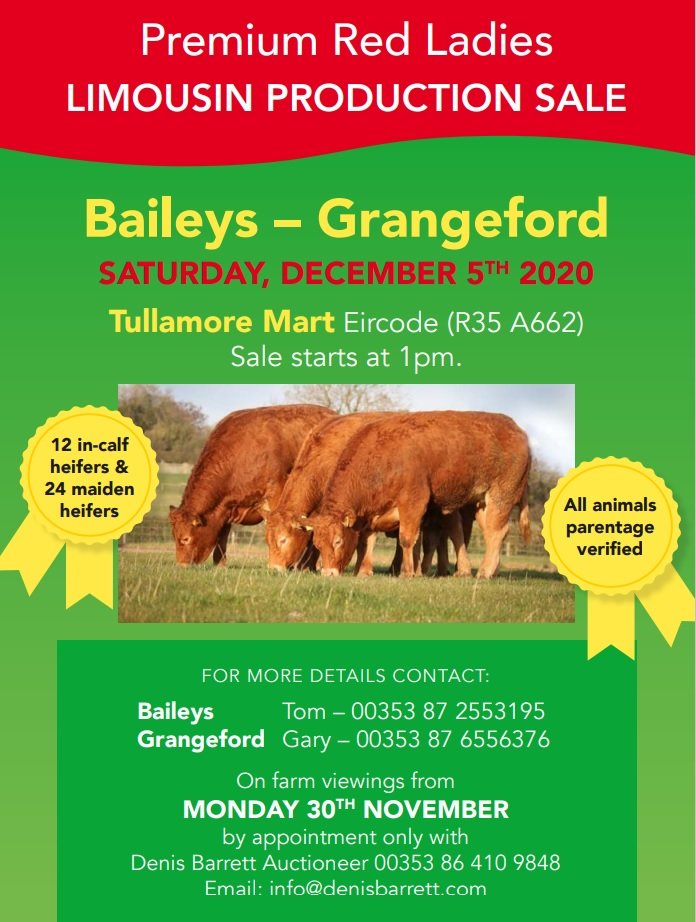 AN INTRODUCTION TO THE BAILEYS HERD FROM TOM BAILEY

The Baileys Limousin herd was founded in 1998 with the purchase of 8 heifers that year. There are sixty cows currently in the herd with four cows being used in our flushing programme.

The herd has bred some outstanding males and females in the past years. Baileys Ice Princess a daughter of Roundhill Vjoyeuse was crowned the champion at the World Limousin Congress 2016, National Champion Tullamore 2015 & 2016 and Balmoral Champion 2015.

This is our second production sale in many years for the herd due to high volume numbers of females. All our heifers in today’s sale have been scanned and all are correct and right for breeding by Dr Dan Ryan.

I am delighted to be involved in today’s sale with Gary. I want to thank the Limousin Society for all the assistance throughout the years. I also want to thank the staff and Management of Tullamore Mart for all their help today. A special word of thanks to Denis Barrett – Auctioneer.

We wish every purchaser the very best of luck and everyone a safe journey home.

Goldies Jackpot – Senior Stock Bull – an Ampertaine Foreman son out of Goldies Vitality – a full sister to Goldies Terence by Ideal 23 and out of Emue.

Goldies Vitality combines milk, easy calving with super temperament and quality, she and her daughters form the backbone of the Goldies herd with daughters breeding bulls to £21000gns
and granddaughter breeding bulls to £22,000gns.
Goldie’s Jackpot progeny sold for €16,800 and €14,400 Baileys Minnie & Baileys Laura at Baileys Sale 2018.
Goldie’s Jackpot sons Westpit Orlando sold for Stg£12,000 and Overall Continental
Champion at the Stars of the Future 2019.

Topping the sale was the incalf heifer Baileys Nora at €8000. Nana is a stylish daughter of Goldies Jackpot and the Queenshead Altea daughter Baileys Ivy. She sold in calf to Ampertaine Nugent.

Selling for €7000 was Baileys Nice One, the half sister to the 2016 World Congress Champion Baileys Ice Princess. Nice one is a daughter of Goldies Jackpot and Baileys Enhance (Queenshead Altea X Roundhill Vjoyeuse), she is also in calf to Ampertaine Nugent.

Baileys John was senior male champion in Tullamore in 2015 and also at the Premier sale in Roscrea, his maternal sister Baileys Nanci sold for €5,600. Nanci has Goldies Jackpot, Queenshead Altea and Roundhill Uron Et in her lineage. She is due to calve down in late January to the junior stock bull Ampertaine Nugent.

A three year old daughter of the influential French dam Turquoise sold for €5400. Baileys Mirabel Et is a powerful daughter of Goldies Jackpot. She sold in calf to Ampertaine Nugent.

Baileys Paris Et, a Lodge Hamlet daughter sold for €5000. Paris is an August 2019 born heifer. Her dam is Goldies Liz, one of the show team at Baileys Limousin, she is a very consistent breeder.

Selling for €4700 was the April 2019 born Baileys Pixie. This young heifer comes from the Dunmore Valerie line – no strangers to success, this line has produced many prize winners including Baileys Hanley, a Premier sale champion. Pixie is a daughter of senior stock bull Goldies Jackpot.

Baileys Nickie, sold for €4600. This incalf Goldies Jackpot daughter is very well related, her dam Baileys Ava is also the dam of Baileys Darwin who in turn is the sire of the renowned Baileys Ice Princess (twice National show champion). Nickie is in calf to Ampertaine Nugent.

The Queenshead Altea daughter Baileys Nadia sold for €4100. Born in March 2018, Nadia is due to calf in late January to the junior stock bull Ampertaine Nugent.

Selling for the same price was the final heifer on offer Baileys Patricia. Eighteen month old Patricia has a back pedigree that includes Ampertaine Foreman, Castleboy Vic and Samy.

INTRODUCTION TO THE GRANGEFORD HERD BY GARY MORRISSEY

We would like to welcome you to our second Grangeford Heifer Sale which includes both incalf and maiden heifers.

Our heifers offered for sale this year all stem from our best bloodlines most notably Goldies Flojo and Proctor’s Ena. Three sisters to Grangeford Jojo and
Grangeford Lady (€12800 at our previous sale) sell, all from different sires.
Also offered is one full sister and four half sisters (by Jojo) to our show cow Grangeford Imogen, who has given us great success down through the years
and is breeding exceptionally well. Imogen’s daughter by the in form Plumtree Fantastic is one of our favourites in the sale.

We at Grangeford think a lot of this group of heifers and hope they go on and breed very well, and most importantly, are very lucky for the successful purchasers.

We are delighted to be part of this sale with Tom in what we believe is an exceptional offering of quality stock. Huge thanks to all that have helped us, including staff in the Limousin office and the mart in Tullamore and to Dennis
Barrett for auctioneering on the day.

Procters Ena, a foundation female at Grangeford sold for €4300. Ena is an eleven year old proven breeder, having produced quality males and females. She is a daughter of Haltcliffe Vermount and a Neutron daughter, Procters Una.

The Sympa daughter Grangeford Nayomi Et sold for €4200. Nayomi is incalf to Ampertaine Elgin. Her dam Goldies Flojo is a consistent breeder by Wilodge Vantastic.

Grangeford Pixie Et, a full sister to the herds show cow – Grangeford Imogen Et – sold for €2900. Pixie is a daughter of Wilodge Cerberus and Procters Ena.

Also out of Procters Ena is Grangeford Penny Lane Et , this heifer sold for €2800.

Her full siter Grangeford Princess Et made the same price.

Completing the line up and selling for €2100 was Grangeford Peggy Sue a daughter of Grangeford Jojo Et and the Plumtree Fantastic dam Grangeford Julie.